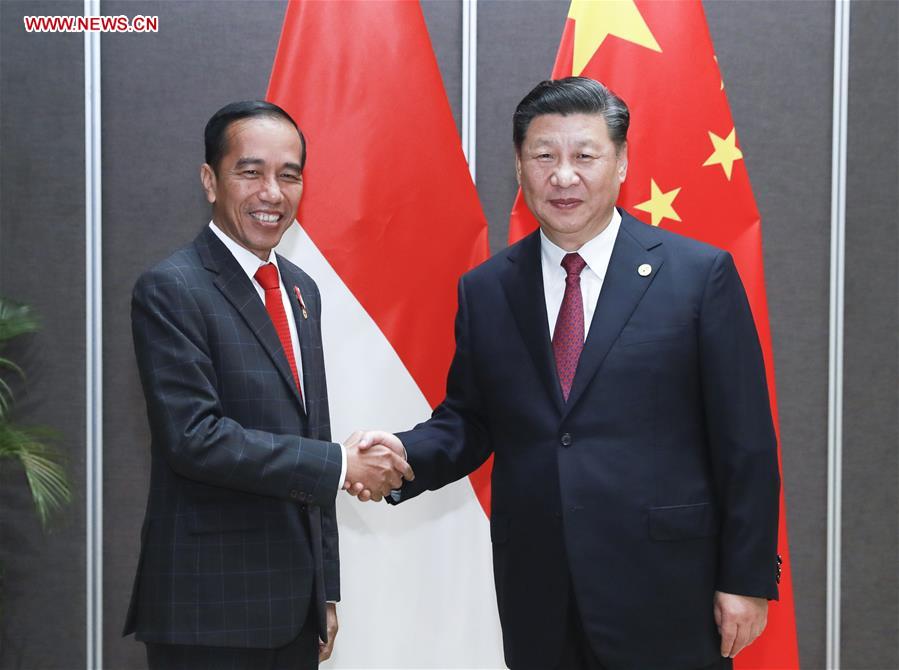 The meeting took place on the sidelines of the ongoing Asia-Pacific Economic Cooperation (APEC) Economic Leaders' Meeting, which was held in Papua New Guinea's capital city of Port Moresby.

Both China and Indonesia are major developing countries and emerging economies and they share similar position in many fields, said Xi, adding that the Chinese side is willing to maintain high-level communication with Indonesia and guide the development of bilateral ties from a strategic height and long-term perspective.

Noting that the two countries have signed a memorandum of understanding last month on the Belt and Road Initiative and Indonesia's Vision of Global Maritime Fulcrum, Xi called on the two sides to actively push forward relevant cooperation.

China attaches importance to the Regional Comprehensive Economic Corridor initiative proposed by President Widodo, and is willing to launch substantive cooperation with the Indonesian side in this regard at an early date, said the Chinese leader.

China is willing to work with Indonesia to promote the optimization and upgrading of relations between China and the Association of Southeast Asian Nations (ASEAN), push for more progress in East Asia cooperation, and strengthen bilateral communication and coordination within multilateral frameworks including the United Nations, the World Trade Organization and the G20, Xi said.

He said that China will enhance communication and coordination with Indonesia within the framework of APEC, so as to achieve positive progress at the APEC meeting this year, continue to push for the economic integration in the Asia-Pacific, and inject new impetus into the economic development of the Asia-Pacific region and the world.

Widodo, for his part, congratulated China on the success of the just-concluded China International Import Expo, and thanked the Chinese side for its help in the relief work after the earthquake and tsunami recently hit Indonesia.

The Indonesian president said that he was pleased to have reached a series of important cooperation agreements and consensus with China, hoping to strengthen bilateral cooperation in a wide range of fields.

Indonesia supports the development of ASEAN-China relations, and is ready to strengthen communication and coordination with China in international and regional affairs, said the Indonesian president.