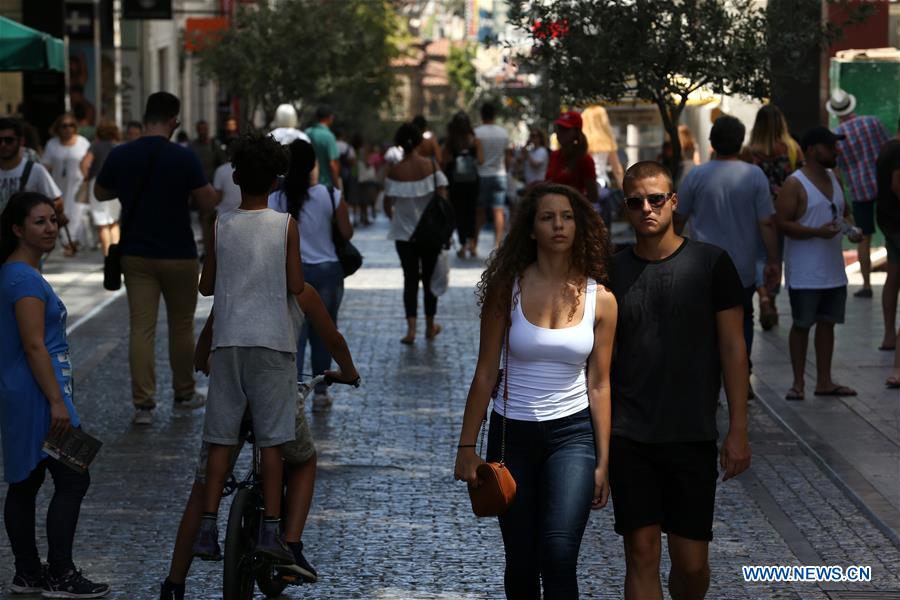 People walk on a commercial street of Athens, Greece, on Aug. 22, 2018. Greek retailing welcomed Monday's milestone of Greece's exit from the international rescue financing programs with mixed feelings of optimism and concern for the future. (Xinhua/Marios Lolos)

Although financial indexes have improved, the real economy and households have still not tasted the fruits of eight years of struggle to keep the country afloat, local businessmen told Xinhua.

The firm survived the crisis with losses, as all small and medium sized businesses (SMEs). The number of stores was reduced from seven to three and the employees from 57 to 37.

For Giannetos nothing finished on Monday, and the struggle continues, he told Xinhua. Because he feels that Greeks have not made all necessary changes to build a healthy economy. He referred to an overblown public sector which does not service entrepreneurs.

"I do not see optimism for the future, because there is no different mentality. We did not learn a thing. We went through eight years of grievance without getting anything which will save us in the end," he said.

"We did not seize the chance, because what predominated was -- and unfortunately Greek citizens have full responsibility -- that everyone was choosing the easy way of illusions. But you cannot build anything based on illusions. It is obvious in our case," he added.

"Businesses which never had debts and overdue checks, now owe to everybody. They delay payments of wages and rents to the owners of stores. This is going on for eight years. Can an economy and society stand this?" he wondered.

The feelings are contradictory, he told Xinhua, because the memoranda period is over, but Greece has undertaken commitments to lenders for coming years which will still put pressure on people.

"I think that there is optimism and fear for the future. For me fear has to do with how we will go on in the post-bailout era. We must not fall back to the same mistakes we did in the past, because all Greeks paid them dearly," Kavvathas said.

"The country should proceed to at least three structural reforms: reduction of taxation for individuals and enterprises, settlement of the private overdue debt which currently stands at 220 billion euros (255 billion US dollars) -- we need to address this if we want to move ahead -- and of course we need to see what we can do regarding the major issue of the financing of businesses and households, the banking system," he stressed.

Vassilis Korkidis, president of the Hellenic Confederation of Trade and SMEs (ESEE) and president of the Piraeus Chamber of Commerce and Industry (PCCI), also expressed hope and concern, since the wounds of the crisis are still deep. With a quarter of Greek gross domestic product (GDP) lost, incomes and consumption fell sharply.

"There are macroeconomic indexes which are positive... However, what we need is to see these positive indexes and the improvement reflected on the real economy and society and we have not seen this yet," he said.

"The retailing turnover stood at 73 billion euros and in recent years dropped to 35 billion euros. As a result, several small and medium sized businesses closed. The memoranda leave behind 245,000 owners of such enterprises who ended up with padlocks and 920,000-930,000 unemployed. It is difficult to reverse all these," the businessman noted.

"Four out of ten businesses in our country are loss making, five in ten have zero or up to 20,000 euros annual profit and only one in ten has profits over 60,000 euros," he added.

For Korkidis there are still issues that need to be addressed such as excessive taxation.

"Lately we notice the easy way of over taxation, which in my opinion has made things worse... We are paying in taxes the 66-67 percent of our income, two thirds in taxes. We cannot live and get growth with the rest one third," he said.

Asked whether he is optimistic for the future, the businessman said there was no other way but to retain hope and see the next day with realism. (1 euro=1.15 U.S. dollars)