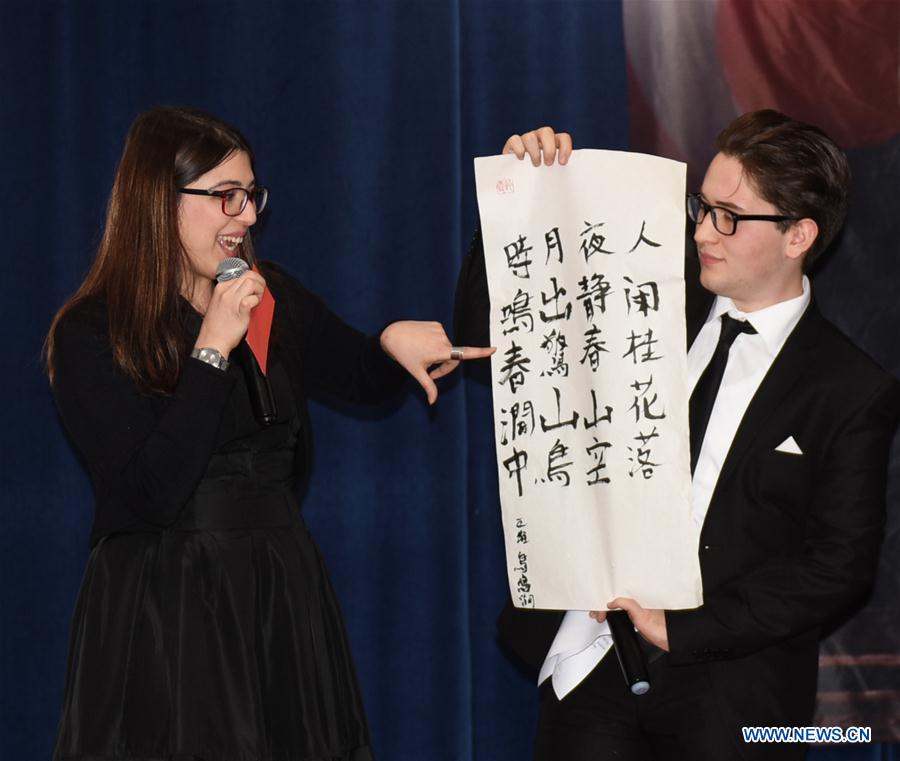 Yeditepe University student Berfu Sengun (L) explains a Chinese poem to the audience during a Chinese New Year celebration in Istanbul, Turkey, on Feb. 19, 2018. About 200 spectators on Monday experienced the festive mood of Chinese New Year at Yeditepe University in Istanbul, where Turkish and Chinese performers presented a rich show featuring joy and harmony of the Chinese festival. (Xinhua/He Canling)

ISTANBUL, Feb. 19 (Xinhua) -- About 200 spectators on Monday experienced the festive mood of Chinese New Year at Yeditepe University in Istanbul, where Turkish and Chinese performers presented a rich show featuring joy and harmony of the Chinese festival.

A Chinese student from Marmara University and a Chinese teacher from Confucius Institute with Yeditepe University, host of the celebration, played solos respectively with Guzheng and Hulusi, both traditional Chinese musical instruments.

Turks made the other seven performances, including dances by members of Yeditepe University Folklore Club, which were full of vigor and joy, and chorus by the university's World Music Club, which appealed to the audience.

Kubra Camir, a Yeditepe student, who once studied the Chinese language and calligraphy for five months at Nankai University, a prestigious institution based in Tianjin in northern China. At the end of her stay, she was even able to discuss politics with local taxi drivers.

Camir drew applause with her solo "The Longest Movie," a Chinese song.

Berfu Sengun performed Chinese calligraphy on a poem by Wang Wei, a well-known poet during China's Tang Dynasty (618-907 AD), which she said described the author's "inner peace of heart" in a golden age in Chinese history.

Now, many Turkish celebrities have been either attending his classes in Istanbul or taking private lectures from him.

Atac made a Tai Chi show with four of his disciples, drawing a loud applause from the audience.

Chinese New Year, also known as the Spring Festival, is being celebrated across the world, as the most important traditional festival for the Chinese people resonates with other peoples by displaying joy and harmony with family reunions, local delicacy feasts and rich performances.