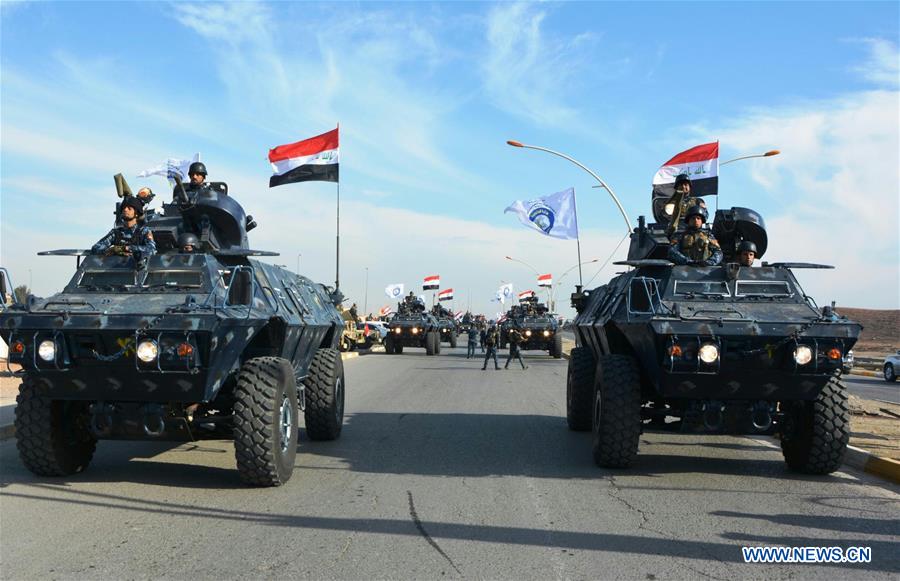 Iraqi armored vehicles take part in a parade in Mosul, Iraq on Dec. 14, 2017. Ninevah Operation Command of the Iraqi military on Thursday paraded in Mosul to celebrate the full liberation of Iraqi lands of the Islamic State (IS) group. (Xinhua/Khalil Dawood)

BEIJING, Dec. 27 (Xinhua) -- After three years of fighting, the ground war against the Islamic State (IS) is coming to an end. However, the long-simmering rivalry between global and regional powers in the Middle East now threatens to spill over from war-torn countries and further divide the region.

By recognizing Jerusalem as Israel's capital, the United States earlier this month sparked a new wave of hostility in the region, which is already witness to clashes between the Sunni and Shiite sects of Islam.

Regional and global rivals are exploiting every opportunity to enhance their standing across the Middle East in the post-IS era and dislodge those endangering their interests, which makes it difficult to achieve a win-win result.

Russia, Turkey and Iran, key stakeholders and power brokers in the region, this month agreed on holding Syrian peace talks in Russia's Black Sea resort Sochi in late January after previous attempts to hold such a conference bringing together both the Syrian government and the opposition parties collapsed.

Osama Danura, a Syrian political expert, said toppling any regime due to foreign interests will not produce peace on the ground but negotiations can.

"Cooperation between Russia, Turkey and Iran has proven to be influential in terms of linking politics with the military situation on the ground," Danura said. "They have succeeded (in establishing a) ceasefire and de-escalation zones in Syria because (they) are directly involved in the Syrian crisis."

After confronting Washington in the past six years by supporting the government of Syrian President Bashar al-Assad, Moscow is now working to reach out to Turkey, a NATO member, to resolve the crisis.

However, the United States and Saudi Arabia are not happy at the increasingly closer ties among the three countries.

"Saudi Arabia also hates to see (greater) Iranian sway in the region, which explains its support to the rebels in Syria," he added.

While Washington would not be happy to see a Turkish shift toward the east, such as forming an alliance with Russia, it knows that Turkey has a recorded history of standing on the U.S. side and any current shift is only temporary, the expert said.

In a region already filled with conflicts, including a sectarian one between Iran and Saudi Arabia, the Kurdish independence movement may provide another excuse for regional and international powers to intervene.

The Kurds, most of whom live in Turkey, Iran, Iraq and Syria, have been consolidating their territory during battles with the IS as a step to statehood, a goal they have been pursuing since a century ago. It is also a goal seen by the four countries, especially Turkey, as an imminent threat to their own territorial integrity.

"Turkey and Iran share a similar goal -- to prevent the establishment of an independent Kurdish state on their common border, as well as fighting Kurdish insurgent parties which they believe have bases in the Kurdish autonomous region in northern Iraq and Syria," Iraqi political analyst Nadhim al-Jubouri said.

In September, the Kurdish autonomous region in Iraq held a referendum with more than 90 percent votes cast in favor of independence. The result angered Baghdad and almost all stakeholders in the Middle East that want to maintain the balance of power.

"There are catastrophic consequences for the Kurdish region after the referendum as the Kurds lost much of their gains ... since 1991," said Ibrahim al-Ameri, a political analyst in Iraq. One of the losses was the resignation of Kurdish leader Masoud Barzani in November 2017.

Fearing that the separatist sentiment of the Kurds in Syria could infiltrate Turkey, inspiring millions of Kurds living there to seek independence, Ankara is striving to address the problem and protect its territorial integrity in the post-IS period.

Russia, on the other hand, has delicately kept the balance of power with various countries and factions by fostering peace talks, obtaining as much support as possible to cement its interest in the region.

According to Danura, given Washington's stance against the Kurdish independence referendum in Iraq, it will possibly give up on the Kurds in Syria in exchange for broad interests or any chance to spoil the plans of its rivals, especially Russia and Iran.

Since U.S. President Donald Trump was sworn in in January, he has threatened to scrap a nuclear deal struck between Iran and six world powers, including his own country, though the pact is widely seen as being conducive to regional peace and stability.

Trump made an unexpected decision to pick Saudi Arabia and Israel as his first overseas visit destinations after assuming presidency, revealing his ambition to improve Israel-Arab relations to forge an alliance against Iran.

However, his controversial decision to recognize Jerusalem as Israel's capital may jeopardize the interests of his allies and further endanger the balance of power in the region.

Closer and more open coordination between Israel and Saudi Arabia can be seen as a signal of increasing military pressure over the proxies of Iran throughout the Middle East, said Mehmet Akif Okur, a professor with Yildiz Technical University in Turkey.

"The perspective of Israel is clear. It sees Iran and its proxies (as) a threat of priority. Saudi Arabia shares the same feelings. In this context, Turkey may take a stand open to changeable positions, on an issue-by-issue basis," he added.