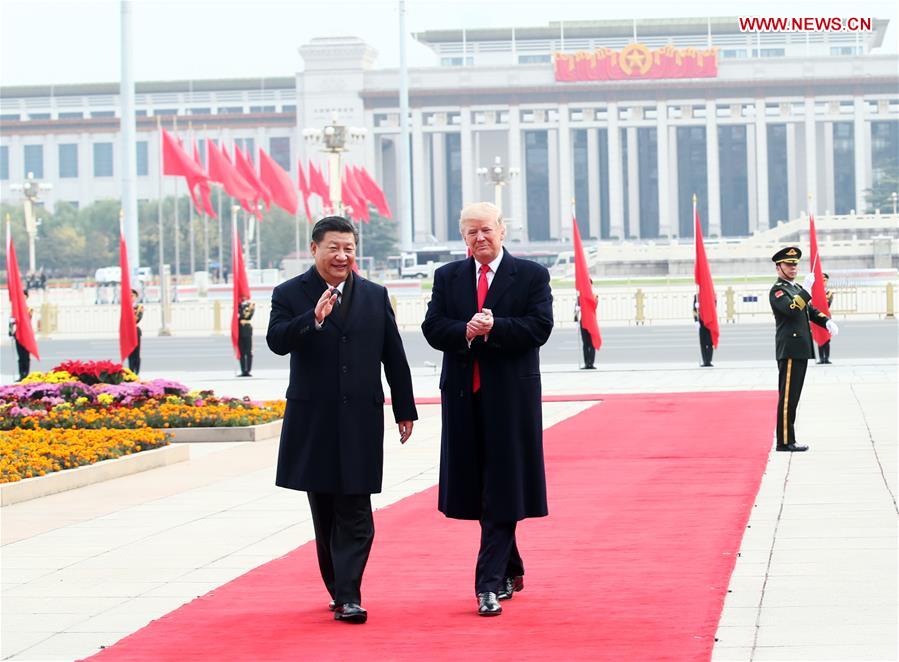 Chinese President Xi Jinping (L) holds a grand ceremony to welcome U.S. President Donald Trump at the square outside the east gate of the Great Hall of the People in Beijing, capital of China, Nov. 9, 2017. (Xinhua/Lan Hongguang)

BEIJING, Nov. 10 (Xinhua) -- Before U.S. President Donald Trump began high-level talks with Chinese President Xi Jinping at the Great Hall of the People in Beijing on Thursday, he was welcomed by a children's choir voicing the hopes of many people for the historic visit.

Join hands, join hands for the world," the children sang.

The cheerful song and the deals worth 253.5 billion U.S. dollars signed by Chinese and U.S. companies during Trump's visit have sent the world an inspiring message: the relations between the world's two biggest economies have come to a new historic starting point.

The three-day visit has affirmed that the two countries have chosen cooperation rather than confrontation.

It's also a good news for the world as stable China-U.S. relations will benefit not only the well-being of both peoples, but also world peace, prosperity and stability.

Frictions and differences remain, but in-depth and thorough dialogues are likely to prevail, as both leaders have decided to steer bilateral ties through head-of-state diplomacy.

According to Xi, the dialogue mechanisms should focus not only on issues of overall and strategic significance, but also on practical cooperation projects, expanding mutual interests and removing disruptions in a timely and proper manner.

Such a hands-on approach represents the tangible efforts made by both sides to incubate cooperation, increase trust, and manage and control differences.

Since the two countries established diplomatic ties in 1979, economic and trade cooperation has been the stabilizer of bilateral ties.

In the first three quarters of the year, China's exports to the United States grew 11.5 percent, outpaced by a nearly-20-percent expansion in imports from the latter.

The latest massive deals signed on 34 cooperation projects have attested to the extensive support from the industries and peoples of both countries.

About 40 percent of the trade surplus is actually generated by U.S. companies in China. Trade with China helps each American family save 850 dollars every year. In 2015, bilateral trade and mutual investment created 2.6 million jobs for the United States.

The service trade surplus which the United States maintained with China surged more than 30-fold from 2006 to 2016.

Two-way investment between China and the United States was also robust. Non-financial investment from Chinese businesses in the U.S. totaled nearly 50 billion dollars by the end of 2016, while U.S. companies had invested nearly 80 billion dollars in 67,000 projects in China.

On Thursday, China's State Administration of Foreign Exchange announced that the Silk Road Fund and the U.S. manufacturing giant General Electric had established a joint investment platform specialized in infrastructure projects in the fields of power grid, new energy, and oil and gas, in countries and regions along the Belt and Road.

With the Belt and Road Initiative, China has showed its wisdom to build an open world economy and its willingness to work with all economic partners on equal footing and for mutual benefits.

It's quite inspiring to see the presidents have agreed to make bigger the "cake of economic cooperation" to solve the problems arising from the rapid development of economic relations between the two countries.

Given the influence of both economies, their cooperation will for sure bring a greater sense of gain to the peoples of the two countries and the world at large.

As Trump concluded his state visit to China on Friday, many Chinese have taken delight in talking about the two presidents' tour of three main halls of the Forbidden City.

The Taihedian, Zhonghedian and Baohedian literally mean the halls of supreme harmony, central harmony and preserving harmony in Chinese, which vividly present the essence of Chinese culture. Without cherishing harmony, the Chinese could not have sustained their culture for more than 5,000 years.

As the Chinese and U.S. economies have been increasingly integrated, a harmonious interaction will help both sides transcend immediate interests to pursue long-term benefits for all.

Only in harmony can the countries accomplish more together.