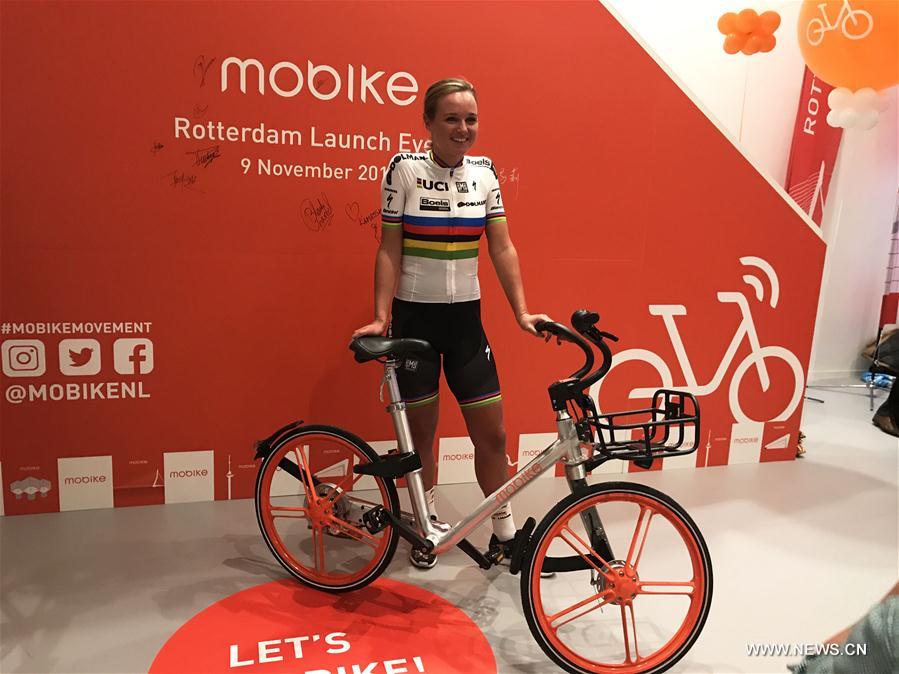 "We started with 150 bikes weeks ago and now there are some four to five hundreds in the streets. That's not many. We really want to know how people will use Mobike, so we do it slightly and in a proper manner," said Ronald Haverman, who now leads the introduction of Mobike into his country.

Haverman is also founder of the Dutch bike sharing program OV-fietsen known to every Dutch family.

Founded in April 2016, Mobike is now active in some 180 cities worldwide, including in Singapore, Italy, Britain, the United States and South Korea. It aims to ride into over 200 global cities in total by the end of 2017.

The company said it has placed 7 million bikes worldwide for more than 200 million registered users and 30 million rides per day.

Every Mobike is equipped with a GPS tracker, making it possible to have its location and state checked at anytime. People can easily open and lock its smart slot with an app on mobile.

A dozen of other global provider are also riding similar programs into various cities.

But the new cashless and dockless bike-sharing schemes are advancing at a slower pace in the Netherlands, a country enjoys the fame of "the Kingdom of Bicycles" where cycling is a daily life.

The capital city of Amsterdam decided in August to temporarily clear up all sharing bikes, citing the reason that the bikes occupied the city's scarce public space.

"Mobike enters a city only with the city's approval," said Haverman. "In Rotterdam, we work well with the municipality and other local stakeholders. We have been talking quite often for months."

As agreed, Mobike "has a team seven days a week from early morning to late in the evening" to move misplaced bicycles and all defective bikes will be replaced, Haverman added. "Because we really want things nice and tidy."

Rotterdam aims to be the best Dutch bicycle city in 2018. According to the municipality, about 160,000 of its 600,000 inhabitants take their bikes each day. The city has wide streets and 600 km of bike lanes and 17,200 sheltered parking spaces and bicycle racks on the street.

Other stationless sharing bikes such as oBike, Gobike and Donkey Republic entered Rotterdam in last months, also with a small quantity of kicking-off bikes.

For Mobike, "we hope the Chinese population in Rotterdam will help us a lot in the beginning because they are already used to the system. It is easier for them to get started than for Dutch people who have to learn," Haverman told Xinhua.

The Dutch OV bicycle founder and Chinese Mobike promotor, who has been a firm advocator for bicycle sharing for decades, said Mobike will first serve the Rotterdammers in the best possible way before thinking about riding into other Dutch cities.

In Amsterdam, the bike-sharing companies have removed almost all their bicycles themselves, according to Marten Grupstra, press officer of the municipality. "This week a special team has started to remove the remaining bicycles. We estimated that of the approximately 4,000 bikes, around 150 were left when we started removing them from the city's public space. We strive to collect all the remaining bikes before the end of this week."

The Municipality has ended talks with most of the bike-sharing companies. "The results will be used as input for new policy which is being written right now. We hope to present this before the end of the year," Grupstra told Xinhua.

Amsterdam believes that dockless sharing bikes could be a solution of better traffic flow, he said.

"Amsterdam covers 10 percent of the over 2 million rides a year nationwide so there are possibilities for dockless or freefloating concepts, but only when well regulated."