China, U.S. should further open up to each other: premier 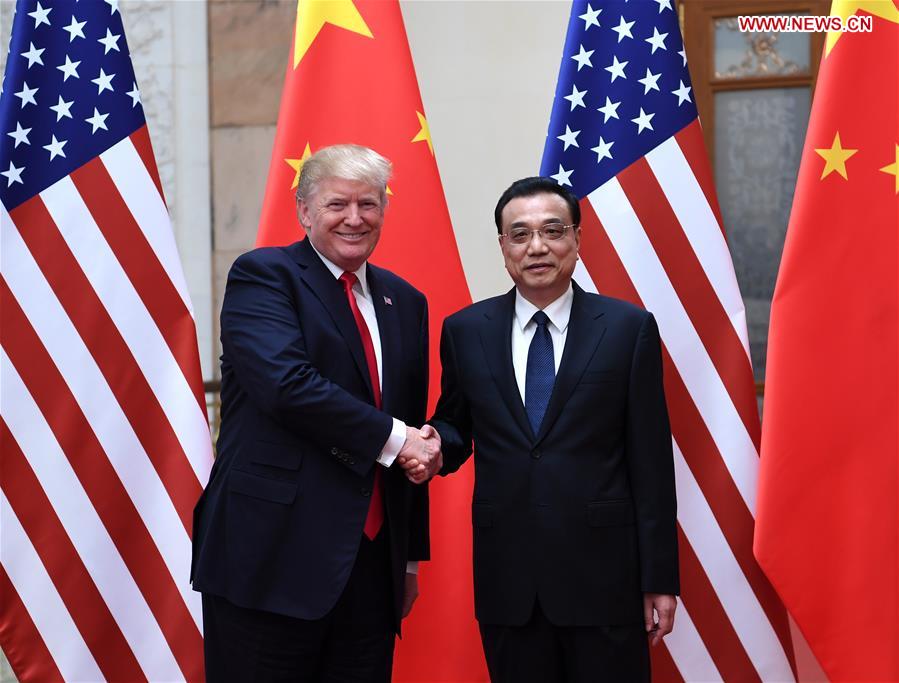 BEIJING, Nov. 9 (Xinhua) -- Chinese Premier Li Keqiang met with visiting U.S. President Donald Trump Thursday, saying the two countries should further open up to each other and create a fair business environment for their companies.

Li said the talks were "fruitful," with important consensus reached on plans for bilateral cooperation.

"By maintaining high-level exchanges and close communication, the two countries will inject new impetus into their cooperation and push their relations to a new level," he said.

The Sino-U.S. relations were moving forward steadily, the premier said, noting that a pattern of economic cooperation with deeply intertwined interests had been formed.

"The positive trend in the Chinese and U.S. economies is good news for both countries and the rest of the world," Li said.

"It is inevitable that there are differences and frictions, such as the trade deficit issue the U.S. side is concerned about," Li said.

"China never pursues a trade surplus with any country, and the rapid development of Sino-U.S. economic and trade ties over the past decades since the establishment of their diplomatic ties has proved that their cooperation is highly complementary and relatively balanced," the premier said.

Li told Trump that as permanent members of the UN Security Council and important countries in the Asia Pacific region, both China and the United States had a responsibility to maintain regional peace and prosperity.

He said China was ready to strengthen work with the United States on international and regional issues.

The premier said he hoped the upcoming leaders' meetings for East Asia cooperation would realize positive signals for the stability and development of the region.

Li plans to attend a series of high-level meetings: the 20th China-ASEAN (10+1) leaders' meeting, the 20th ASEAN-China, Japan and Republic of Korea (10+3) leaders' meeting, and the 12th East Asia Summit in the Philippine capital Manila from Nov. 12 to 16.

Trump spoke positively about the outcomes of his visit, saying he hoped the two countries would work together closely to tackle challenges, and promote fair and balanced economic ties.