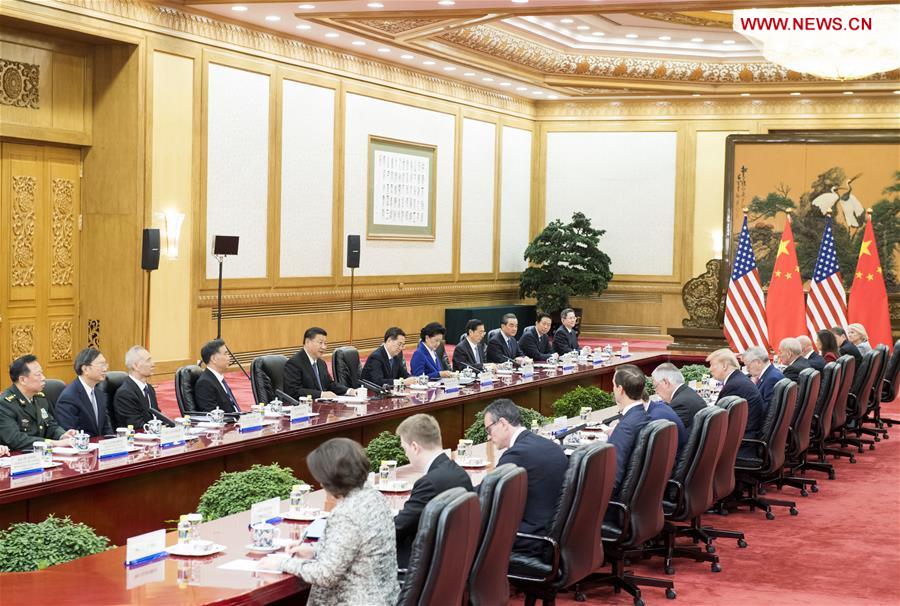 "Both sides should draw the future roadmap for the development of China-U.S. ties, and increase trust and defuse doubts on major and sensitive issues in line with the goal set by the heads of state," Xi said during their talks in Beijing.

Trump also pledged to maintain close communication with Xi and promote the development of bilateral ties and cooperation on international affairs.

"We believe Sino-U.S. relations concern not only the well-being of both peoples, but also world peace, prosperity and stability," Xi said during the talks.

The presidents agreed that cooperation is the "only correct choice" for China and the United States, and a better future would only be achieved through win-win cooperation.

Xi noted that the Sino-U.S. relations are "at a new historic starting point" and China is willing to work together with the United States to respect each other, seek mutual benefit and reciprocity, focus on cooperation, and manage and control differences.

Trump said the two countries have a great relationship and their cooperation accords with fundamental interests of both and is crucial to resolving world problems.

During their talks, the two presidents were briefed on the progress of the four high-level dialogue mechanisms, which were initiated by them during their first face-to-face meeting at Mar-a-Lago, Florida in April this year.

Before Trump's state visit to China, they also met in Hamburg, Germany on the sidelines of the G20 summit in July.

The dialogue mechanisms should not only focus on issues of overall and strategic significance, but also on individual cooperation projects, expand mutual interest and remove disruptions in a timely and proper manner, said Xi.

The mechanisms should play an important role in serving as accelerators for increasing mutual trust, incubators for fostering cooperation and lubricant for managing and controlling differences, according to Xi.

The Taiwan issue is the most important and most sensitive issue at the core of Sino-U.S. ties, which concerns the political foundation of bilateral relations, Xi said.

He urged the United States to continue to abide by the one-China principle to prevent disturbance to the overall situation of Sino-U.S. ties.

Military relations should serve as a stabilizing factor in China-U.S. ties. "The Pacific Ocean is vast enough to accommodate both countries," Xi said.

Stating that common interests of China and the U.S. in the Asia-Pacific far exceed differences, Xi said the two sides should cooperate actively in the region so that more regional countries can work with them to jointly contribute to regional peace, stability and prosperity.

Trump said the U.S. government adheres to the one-China policy.

During the talks, the presidents stressed that the two countries have common goals in eventually solving the Korean Peninsula nuclear issue through dialogue and negotiation, and reiterated the commitment to promoting peace, stability and prosperity in the Asia-Pacific region.

Xi said the two sides should draw up and launch economic and trade cooperation plans for the next stage as soon as possible and push for "larger scale, higher level and broader fields" of cooperation.

He called for advancing healthy development of Sino-U.S. economic ties in the direction of "a dynamic equilibrium, mutual benefits and win-win results."

"Economic and trade cooperation is the stabilizer and ballast of Sino-U.S. relations," Xi said.

He noted that the Sino-U.S. economic and trade relations are mutually beneficial in nature, saying that cooperation brings huge gains to both countries and their people.

China will break new ground in pursuing opening up on all fronts and implement policies for high-level liberalization and facilitation in trade and investment, according to Xi.

The Chinese president also wanted the two nations to coordinate and cooperate more in multilateral mechanisms, including the International Monetary Fund, the World Bank, the Group of 20 and the Asia Pacific Economic Cooperation, to jointly work for strong, sustainable, balanced and inclusive growth of the world economy.

In addition, the presidents agreed to make bigger the "cake of economic cooperation" to solve the problems arising from the rapid development of economic relations between the two countries.

People-to-people exchanges are a long-term cause and crucial to the development of China-U.S. relations in the long run, Xi noted.

He called for the two sides to implement cultural cooperation programs and exchanges between young people, and enhance mutual understanding and friendship between Chinese and American people, to inject fresh impetus into the sustainable development of bilateral ties.

Xi and Trump agreed to deepen bilateral cooperation in hunting fugitives and repatriation of illegal immigrants and promote exchanges in education, science and technology, culture and healthcare.

After the talks, Xi and Trump witnessed the signing of agreements between Chinese and U.S. companies in sectors including energy, manufacturing, agriculture, aviation, electronics and automobiles.

The contracts and two-way investment agreements are worth more than 250 billion U.S. dollars.

Prior to the talks on Thursday morning, Xi held a welcome ceremony for Trump at the square outside the east gate of the Great Hall of the People.