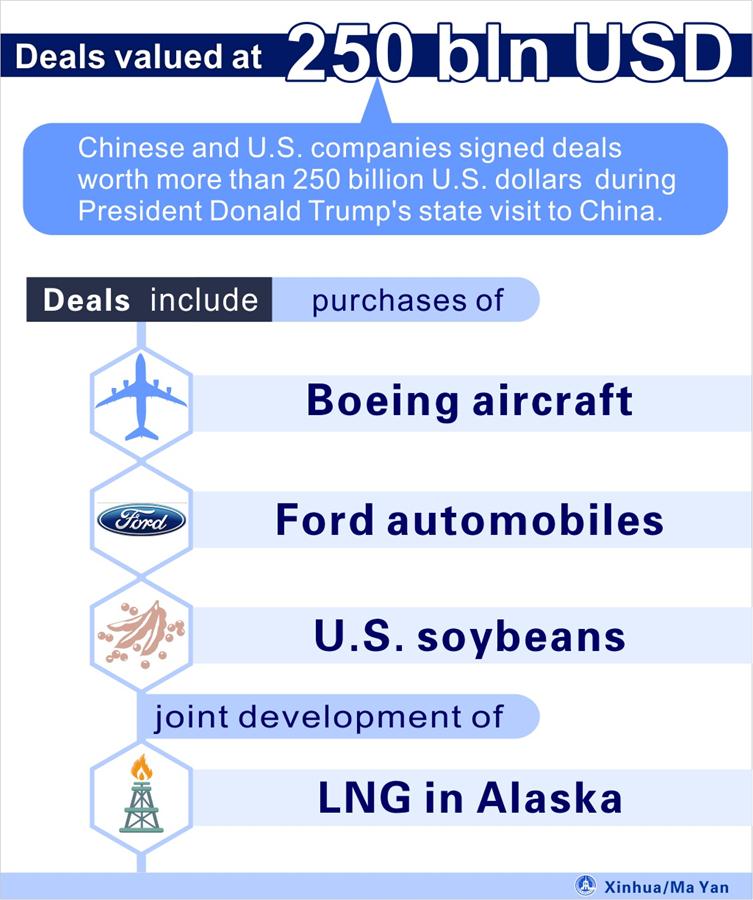 Chinese President Xi Jinping on Thursday revealed the figure after he and President Trump witnessed the signing of the agreements.

China and the United States have huge potential in reciprocal economic and trade cooperation, Xi said.

Being the world's biggest developing economy and developed economy, China and the United States are highly complementary rather than competitive, Xi said when meeting with business delegates from both countries.

"We are willing to expand imports of energy and farm produce from the United States, deepen service trade cooperation. We hope the U.S. side will increase exports of civil technology products to China. We will continue to encourage Chinese companies to invest in the United States. We also welcome U.S. companies and financial institutions to participate in the 'Belt and Road Initiative'," he said.

Given the rapid growth of bilateral trade, it's unavoidable to have friction, said Xi. The two sides should uphold the principles of equality and mutual benefit, mutual understanding and accommodation, and handle disputes through dialogue and consultation, he said.

Xi reaffirmed China's commitment to opening up and reform and said China will not close its door to the world, and it will only become more and more open.

Overseas-invested companies, including the U.S.-invested firms, will enjoy a more open, transparent and standard market environment in China, he said.

Xi said China's economic outlook will look bright for a long time. The Chinese economy has been transitioning from a phase of rapid growth to a stage of high-quality development with improving economic structure. It has the foundation, condition and impetus to sustain the good momentum.

China is the United States' largest trading partner while the U.S. is China's second largest. Bilateral trade surged to 519.6 billion U.S.dollars in 2016 from 2.5 billion dollars in 1979 when the two countries established diplomatic ties.

Over the past decade, U.S. exports to China increased 11 percent annually on average, while China's exports to the United States only rose 6.6 percent.

Two-way investment is gaining steam. Jobs created by Chinese-invested firms across America had jumped ninefold since 2009 to 140,000 last year, according to a recent report by the National Committee on U.S.-China Relations and Rhodium Group.