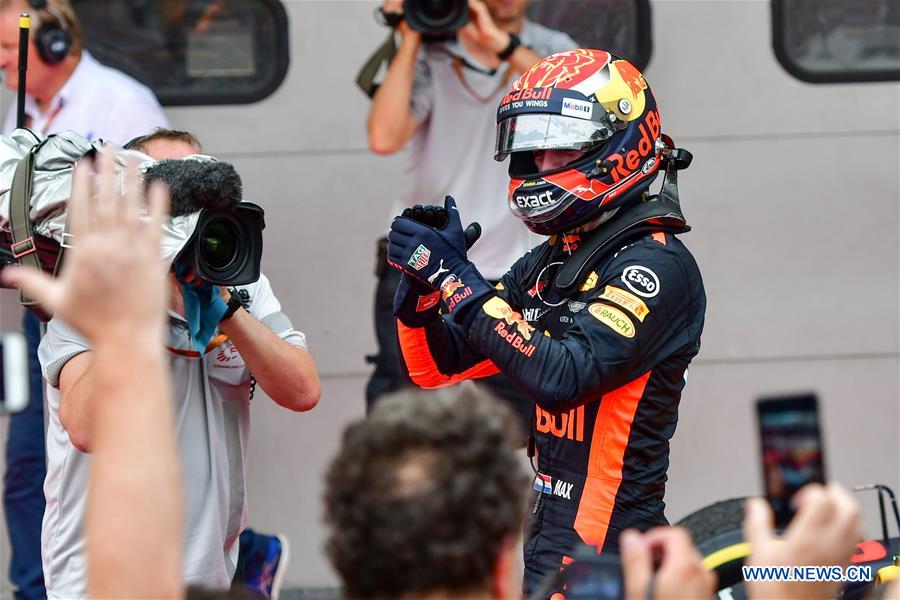 Red Bull driver Max Verstappen of the Netherlands celebrates after the Formula One Malaysia Grand Prix at the Sepang Circuit in Malaysia, on Oct. 1, 2017. Max Verstappen claimed the title of the event. (Xinhua/Chong Voon Chung)

SEPANG, Malaysia, Oct. 1 (Xinhua) -- Red Bull driver Max Verstappen wrapped up the history of Formula One Malaysia Grand Prix at Sepang Circuit with a dominant win on Sunday, while Sebastian Vettel, who started his race from the last, retained his chance in the two-horse race with world championship leader Lewis Hamilton by storming to the fourth.

Verstappen, who just celebrated his 20th birthday on Saturday, managed to overtake pole-sitter Hamilton in the fourth lap and continued his advantage in the following race, finishing the 56-lap race at one hour 30 minutes 1.290 seconds. Describing Hamilton as one that "has more to lose" in the championship race, Verstappen said at the post-race press conference that he capitalized on Hamilton's carefulness.

Ferrari's nightmare, which rendered Vettel a last starting position in qualifying session, continued on Sunday as Kimi Raikkonen was wheeled away from the grid before the start of the race due to engine failure.

But Vettel's performance could serve as some comfort. He overtook one car after another, until he ran into Daniel Ricciardo in the 40th lap. Running on super-soft tires, Vettel closed his gap with Ricciardo to less than one seconds. The battle for the third only ceased when Ricciardo got past Fernando Alonso, who refused to let Vettel pass.

With five races remaining in the 2017 calendar, Hamilton now has 34 points ahead of Vettel. But nobody dares to relax. Hamilton said that his car still has "a fundamental issue" and they need to keep pushing. Bottas, another driver from Mercedes, finished a tepid fifth ahead of Sergio Perez of Force India.

It was the last time Malaysia hosting the Formula One race, at least in the foreseeable future. Citing financial reasons, the Malaysian government terminated its contract with F1 one year in advance.

According to the figures from Sepang International Circuit, a total of 110,604 spectators entered the circuit in three days, a lot more than the number of 83,828 in 2016. But it still can not produce too much financial feasibility for the country.

Sepang CEO Razlan Razali said Malaysia would not want to host F1 even for free.

After its debut in 1999, Sepang still left racing fans with many firsts and memories. When attending a press conference before the race on Sunday, Malaysian Prime Minister Najib Razak said that the race could return if economic conditions were right.