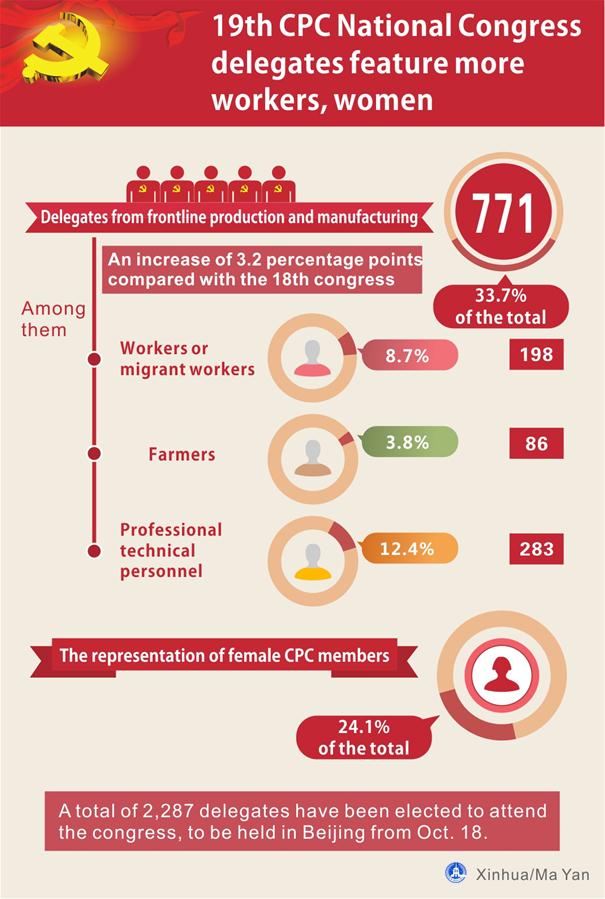 Graphics shows that delegates to the 19th National Congress of the Communist Party of China (CPC) feature more workers and women, according to a statement by the CPC Central Committee's organization department Saturday. (Xinhua/Ma Yan)

BEIJING, Sept. 30 (Xinhua) -- Compared with the delegates to the 18th National Congress of the Communist Party of China (CPC), more CPC members from frontline production and women have been elected as delegates to the 19th congress.

According to a statement by the CPC Central Committee's organization department Saturday, a total of 771 delegates, or 33.7 percent of the total, are from frontline production and manufacturing, an increase of 3.2 percentage points compared with the 18th congress five years ago.

Among them, 198 are workers or migrant workers, 86 are farmers and 283 are professional technical personnel, it said.

The statement also noted that the election of the delegates was conducted in adherence to strict standards regarding political integrity and clean work styles and that 27 people, including Sun Zhengcai, former Chongqing Party chief, and Mo Jiancheng, a former senior official with the Ministry of Finance, have been disqualified during the process.

A total of 2,287 delegates have been elected to attend the congress, to be held in Beijing from Oct. 18.

The delegates, who were elected from across the country when local CPC committees held their congresses this year, will need to pass a further check to get final approval to attend the congress.

The delegates were elected in accordance with the Party constitution and CPC Central Committee requirements, the statement said.

The average age of the delegates is 51.8, about 0.2 year younger compared with the 18th congress, and about 70.6 percent of them are under the age of 55, according to Saturday's statement.

The statement said 2009 delegates, or 87.8 percent of the total, joined the CPC after December 1978 and 416 of them joined the Party after January 2000, a fact indicating that the Party spirit is passing on to younger generations.

Strict procedures were observed all through the process, from the nomination and candidate selection to the organizational review and election.

Grassroots CPC members have shown enthusiasm and fully expressed their will in the election and the delegates elected are outstanding representatives of CPC members from various sectors and social spectra.

Various measures were also taken to ensure Party members in remote areas and those engaged in field work participated in the election, the statement said, noting that the average participation rate has reached 99.2 percent.

It also stressed that the election was a competitive one, and more than 15 percent of the preliminary nominees had been eliminated during the process.

According to convention, some retired CPC members will also attend the 19th CPC National Congress as specially invited delegates, the statement said.