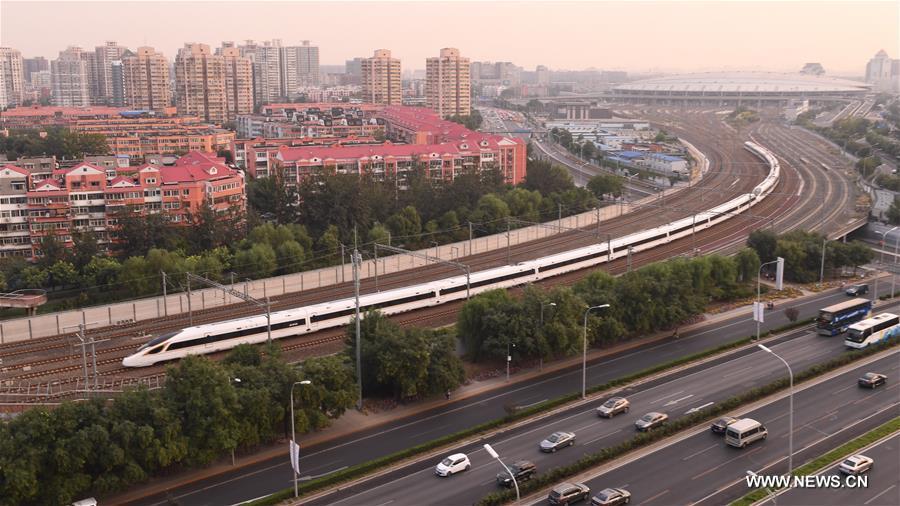 BEIJING, Sept. 21 (Xinhua) -- China Thursday increased the maximum speed of bullet trains on the Beijing-Shanghai high-speed railway to 350 kph, making it once again the world's fastest train service some six years after it was reduced to 300 kph.

The route will be operated by China's Fuxing, or Rejuvenation, bullet trains.

The speed increase will cut the journey between Beijing and Shanghai to 4 hours and 28 minutes.

"These trains are so popular that the tickets for today's services sold out a week ago," Huang Xin, an official with China Railway Corporation (CR), said Thursday.

Connecting the Chinese capital in the north with the country's major financial and trade hub in the south, the Beijing-Shanghai high-speed railway is one of the busiest in the country, carrying more than 100 million passengers a year.

"The Beijing-Shanghai high-speed railway was built to the world's highest standards, and the Fuxing trains were designed to run at a maximum speed of 350 kph. Operating the Fuxing on this route at a speed of 350 kph is without question in terms of safety, reliability and comfort," said Lu Dongfu, CR general manager.

The Fuxing trains are a substantial upgrade on the previous bullet trains, known as Hexie, or Harmony. Entirely designed and manufactured in China, the Fuxing is more spacious and energy-efficient, with a longer service life and better reliability.

The ticket price for the service will not be raised for the time being, said He Huawu, from the Chinese Academy of Engineering, who is a special technical advisor to CR general manager.

The Fuxing has completed 600,000 kilometers of performance tests and has a designed service life of 30 years, said Yu Hongliang, a mechanic with Beijing Railway Bureau.

It is fitted with more modern features such as power outlets, USB ports and free WiFi.

Compared with the Hexie 380, its power consumption per 100 km is 10 percent less when running at 350 kph, said Zhang Bo from the China Academy of Railway Sciences.

The train also has a sophisticated monitoring system that automatically slows the train in case of emergency or abnormal conditions.

China has the world's longest high-speed rail network, with 22,000 kilometers currently in operation. About one-third of the country's high-speed railways were designed to run at a speed of 350 kph.

Chinese-manufactured high-speed trains have been sold to Indonesia, Russia, Iran and India.

The Fuxing trains can be adapted to various geological and operational situations, including extreme climates, a core competitive strength in the global market, He said.