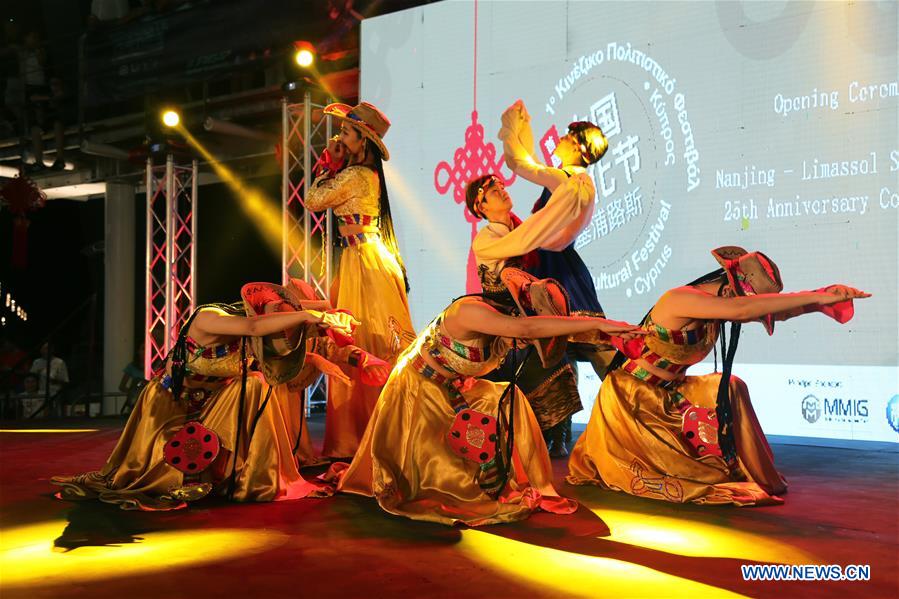 Chinese dancers perform "Love Song of Kang Ding" during the openning ceremony of the first Chinese Culture Festival in Limassol, Cyprus, on Sept. 15, 2017. The first Chinese Culture Festival designed to celebrate the 25th anniversary of sister-city ties between Cypriot port city of Limassol and Chinese city of Nanjing on Friday fascinated more than 1,000 people to the popular Limassol Marina. (Xinhua/Zhang Zhang)

LIMASSOL, Cyprus, Sept. 16 (Xinhua) -- The first Chinese Culture Festival designed to celebrate the 25th anniversary of sister-city ties between Cypriot port city of Limassol and Chinese city of Nanjing on Friday fascinated more than 1,000 people to the popular Limassol Marina.

Chinese Ambassador to Cyprus Huang Xingyuan said the festival was one of the most important events among the "Heart to Heart" Chinese Culture Events Program proposed by the embassy.

The marina is the most appropriate setting as it is frequented by thousands every night who come to sip coffee or have dinner against the backdrop of anchored yachts and light splashing of waves slapping against jetties.

Chinese chefs offered various culinary delights as Chinese musicians and dancers presented folklore music and dancing to Limassol citizens priding themselves as being lovers of music, singing, dancing and fans of good food.

"You may not only be amazed by the scale of the event, but also feel the charm and the rich content which includes almost all aspects of Chinese traditional culture, such as apparel, food, music and handicraft," Huang told Xinhua.

"It is a happy moment to get together with both new and old friends tonight," he added.

Limassol Mayor Nicos Nicolaides, in welcoming a delegation from Nanjing at the event, said the agreement for the sister-city relationship of Limassol and Nanjing was aimed at promoting cooperation in the sectors of commerce, culture, athletics, science, technology and tourism.

"These terms are in full force 25 years later and the visit by a delegation from Nanjing provided an opportunity to reaffirm the agreement and widen it through a road-map of further activities," he said.

Nicolaides said Limassol and Nanjing have many common features that truly make them sister cities, such as being centers of commerce, tourism as well as economic and cultural activities.