Special treat to cool off animals at Beijing Zoo 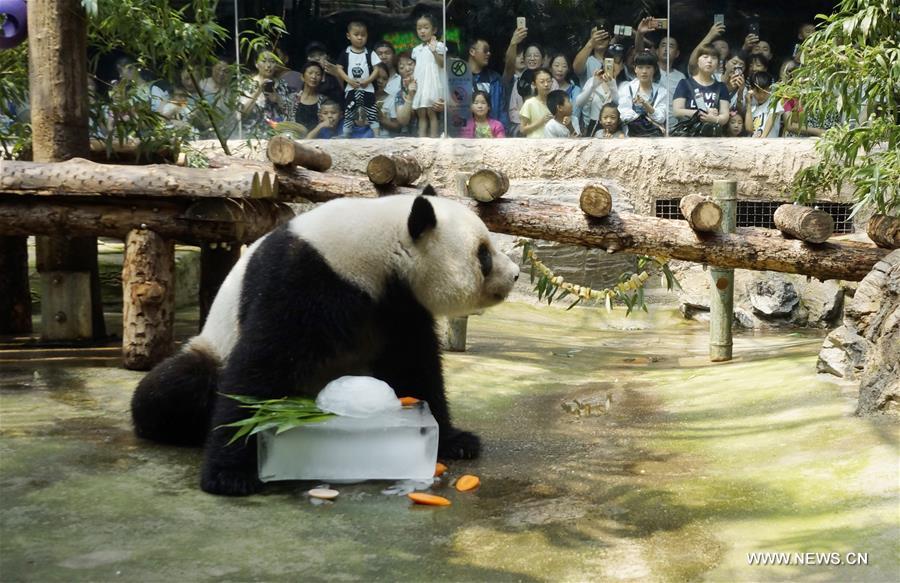 BEIJING, July 12 (Xinhua) -- A large part of China is sweltering in intolerable heat as temperatures in central and eastern regions have soared to 40 degrees Celsius.

Not only humans are suffering, so are the animals.

With its mouth wide open, a rhino at the Beijing Zoo greedily enjoyed a spray of water. Not far away, others swallowed watermelons prepared by their feeders.

Li Dongrui, a member of the zoo's feeding team, told Xinhua they sprayed water at least twice a day to cool down the overheated animals.

"We also set up paddling pools for the pandas and elephants, and air conditioners for the polar bears," he said. "This year, we even created a 10-square meter mud pool for the rhinos."

When the temperature hits 35 degrees Celsius, giant ice cubes are delivered to the enclosures of polar bears, red pandas, golden monkeys, and chimpanzees.

The ice cubes, weighing 15 kilos each, are prepared three days in advance. Eight to ten ice cubes are needed each time.

The giant pandas receive a special treat -- a dessert of mung bean soup, a traditional Chinese summer soup believed to be beneficial to human body, and in this case animal body, to reduce heat.

"Giant pandas cannot handle the heat, so we must keep the indoor temperature between 24 to 26 degrees Celsius," Li said. "They eat eight meals every day to maintain strength, including bamboo shoots, carrots, and mung bean soup. Each panda consumes almost 50 kilos of bamboo a day."

This summer, the Beijing Zoo has served 12 kinds of fruit, 28 kinds of vegetable, three kinds of green fodder as well as sugar and beverages daily to keep the animals healthy under the baking sun.

To guarantee the freshness, all the green fodder is delivered at night and given to the animals within 15 hours. Bamboo leaves have been transported refrigerated since June, so that the giant pandas can have the best quality of their favorite food.