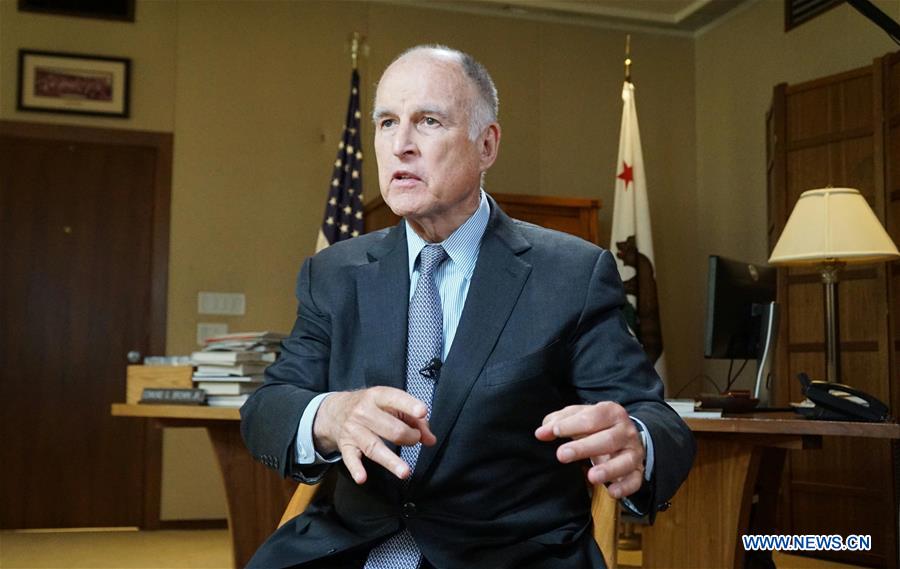 Governor Jerry Brown of the U.S. state of California speaks during an interview with Xinhua at his office in the state capital of Sacramento on May 31, 2017. Governor Jerry Brown has recently vowed to improve his state's cooperation with China to combat climate change together, which he said is imperative for global well-being. (Xinhua/Huang Chao)

SAN FRANCISCO, June 2 (Xinhua) -- Governor Jerry Brown of the U.S. state of California has recently vowed to improve his state's cooperation with China to combat climate change together, which he said is imperative for global well-being.

Brown made the remarks in an interview with Xinhua at his office in the state capital of Sacramento on Wednesday before departing for a trip to China on Friday to forge closer ties between the most populous U.S. state and China in such areas as climate change.

The timing for this trip was noticeable, as Brown responded strongly a day ago to U.S. President Donald Trump's announcement to withdraw from the Paris Agreement, vowing to "resist" and to "fight."

The Paris Agreement was adopted by 196 parties in Paris in 2015 and it went into effect in November last year. The pact sets a target of holding the global average rise in temperature below 2 degrees Celsius above pre-industrial levels, and preferably below 1.5 degree Celsius.

"China was the leader, with America, to create the Paris agreement," he noted. "Now, without Washington, China becomes all that more important. And I want California to be a close partner" along with other U.S. states, countries and regional blocs like the European Union, Brown said.

The week-long China trip will take Brown to China's southwestern city of Chengdu, the eastern city of Nanjing, and the capital city of Beijing, where he will host a clean energy forum with China's Ministry of Science and Technology and Sichuan Province, and participate in related events.

In Chengdu and Nanjing, he will attend events dedicated to clean technology and environmental protection, in an effort to forge greater regional climate collaboration and action.

It is the governor's third visit to China. The previous one, a trade and investment mission, took place in 2013. On his itinerary this time, of the 13 meetings and remarks listed, 10 are related to efforts of fighting climate change.

The climate agenda is "urgent," said Brown. "Because what we do today will create irreversible consequences in the years ahead. Time is running out. This is very serious."

"If the Himalayas start melting their ice more quickly, more dramatically, this will cause a lot of tension, a lot of suffering. In California already, our fires are not just in the summer, but are for most of the year," he said.

Brown said in case that "in 10, 15, 20 years or in the future, the seas will be rising, the weather will be becoming far less benign, it is imperative that we act."

"No time to waste and fiddle around with short-term issues. We have to have long-term vision. I think China, in the way it operates, has a particular capacity for a longer term kind of approach and that's why I'm hoping California can be a part of (it)," he said.

Brown said he believed that the Chinese scientists and China's national policies are "very important," adding that he hopes "America will be joining China very soon. But that may take a few years."

"We need to collaborate. It is not about one nation being the winner. It is about all nations dealing with the common threat. This is mutually beneficial. You have to think one world, not this country fighting that country," he said.

Chinese Premier Li Keqiang said Thursday in Berlin that China will continue to implement the commitment of the Paris climate deal and "move towards the 2030 goal step-by-step steadfastly."

"The Paris Agreement was a hard-won result," Chinese Foreign Ministry spokesperson Hua Chunying also said Thursday, noting that climate change is a global challenge and no country can remove itself from the issue.

Even if other countries change their position, China will continue its plan of innovation, coordination, green development, opening-up and sharing, she said.