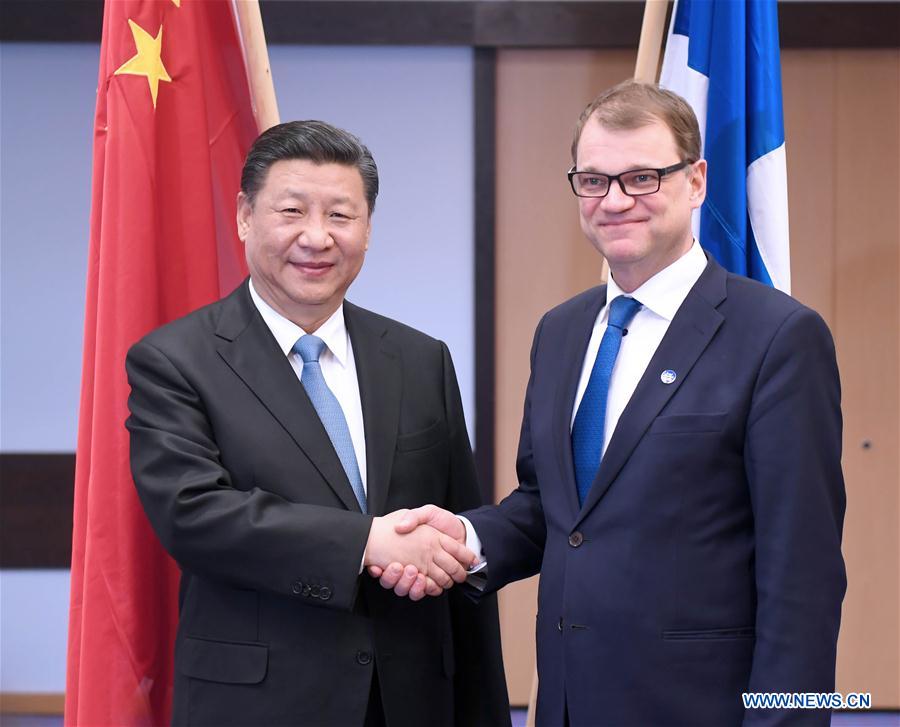 China and Finland have highly compatible visions and strategies on development and enjoy broad prospects in mutually beneficial and win-win cooperation, he added.

China is ready to join hands with Finland to promote pragmatic cooperation in such key areas as scientific and technological innovation, energy conservation and environmental protection, the Arctic affairs, tourism and sports, Xi said.

Against the backdrop of sluggish global economic recovery, the Chinese economy maintains good momentum of development, Xi pointed out, adding that the country has been deepening the supply-side structural reform.

Xi said China has both confidence and capability to maintain sustained and healthy economic development to create more opportunities for and deliver more benefits to other countries, including Finland, across the world.

The development of Europe is conducive to promoting world peace and stability, Xi said, adding that China expects Europe to be prosperous, stable and open, and the European Union to develop further and become stronger.

He said China expects Finland to play a more active role in boosting the development of China-Europe relations.

Noting that Finland serves as the rotating presidency of the Nordic Council this year, Xi said the Chinese side stands ready to join efforts with the Finnish side to push for more fruitful results in China-Nordic cooperation.

For his part, Sipila said the Finnish side appreciates the active role China has played in global affairs, and speaks highly of the important speech Xi made at the annual meeting of the World Economic Forum in Davos at the beginning of the year.

Finland is ready to expand cooperation with China in areas such as investment, environment and clean technologies, tourism, winter sports, education and the Arctic affairs, and within the framework of the Belt and Road Initiative, he said.

Finland supports the development of Europe-China relations and is willing to push for fresh achievements in Nordic-China cooperation.

Also on Wednesday, Xi's wife, Peng Liyuan, who is in Finland to accompany her husband, visited the Design Museum and the Sibelius Museum, the former residence of Jean Sibelius, who was a renowned Finnish composer and violinist of the late Romantic period.

While visiting the Sibelius Museum, Peng said cultural and people-to-people exchanges and cooperation between China and Finland enjoy a solid foundation and huge potential.