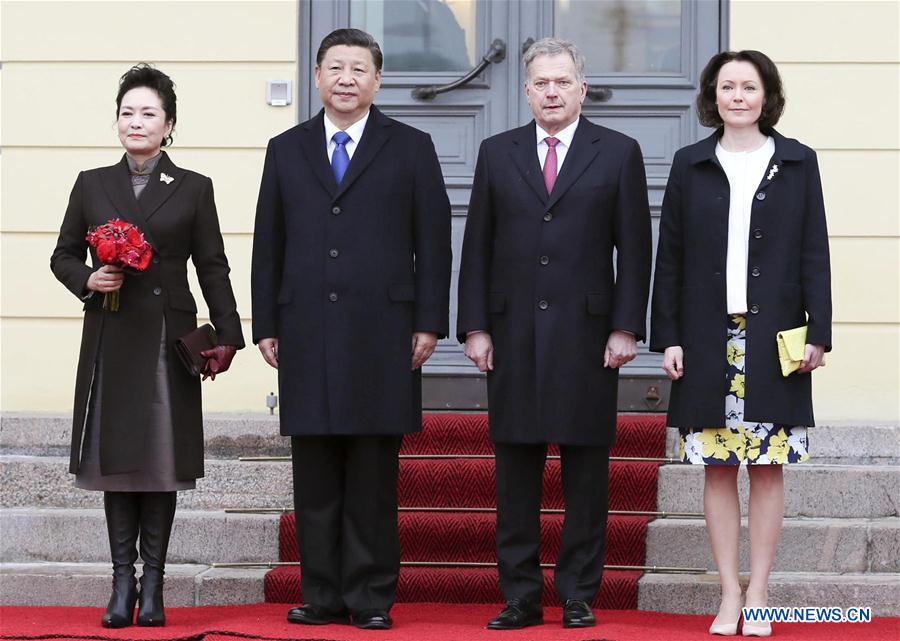 During talks between visiting Chinese President Xi Jinping and his Finnish counterpart Sauli Niinisto, the two heads of state stressed that to build a more forward-looking strategic relationship that keeps pace with the times is in the fundamental interests of both countries and their peoples.

"China and Finland are good friends and partners who respect each other, treat each other as equals and enjoy mutually-beneficial cooperation," Xi said. "The peoples of our two countries have always cherished a friendly sentiment toward each other."

Noting that the development needs of China and Finland fit well with each other, Xi called on the two sides to increase high-level exchanges, build up strategic mutual trust, explore potentials for cooperation and give support to each other in development.

Niinisto expressed warm welcome to the Chinese president for his visit on the occasion of the centenary of Finland's independence.

Finland highly values China's achievements in development and its important role in international affairs, he said.

The Finnish side hopes to carry out more high-level contacts and exchanges in all areas with China, and deepen cooperation in economy and trade, investment, innovation, environmental protection, tourism, winter sports and the Arctic affairs, as well as within the framework of the Belt and Road (B&R) Initiative, Niinisto said.

Finland also wants to strengthen communication and coordination with China on major international issues and push for an even closer cooperation between the European Union and China, he said.

The B&R Initiative was put forward by President Xi in 2013, aiming to build a trade and infrastructure network connecting Asia with Europe and Africa along and beyond the ancient Silk Road trade routes.

It is the first visit by a Chinese head of state to this Nordic country in 22 years.

The two countries upgraded their ties to the future-oriented new-type cooperative partnership in 2013, when Niinisto paid a state visit to China.

During the summit talks between Xi and Niinisto on Wednesday morning, the two leaders confirmed the establishment of the bilateral relationship by pledging to boost substantial cooperation in all areas.

The two sides reaffirmed their respect for each other's sovereignty and territorial integrity, and their willingness to take into account each other's core interests and major concerns.

The Finnish side also reaffirmed its commitment to the one-China policy.

The two countries agreed to step up exchanges and cooperation between their governments, legislative bodies, judiciary authorities and political parties.

On economic front, the two sides pledged to seek synergy between their economic development plans, discuss cooperation within the framework of the B&R Initiative and jointly promote the interconnectivity of Eurasia.

Bilateral investment should be boosted and bilateral trade should grow in a more balanced way, the two leaders said during their talks.

The two sides will also endeavor to build the Chinese-Finnish ecological parks.

As China will host the 2022 Winter Olympic Games, the two countries agreed to cooperate more in winter sports and preparation for the Winter Olympics.

The two sides will launch a China-Finland Year of Winter Sports in 2019.

On international and regional affairs, the two countries pledged to enhance communication and coordination to safeguard world peace and stability, improve global economic governance, help implement the 2030 Agenda for Sustainable Development, and actively participate in the multilateral process of climate change.

Xi's visit to Finland is his first trip to a European Union (EU) member state this year, and also his first visit to the Nordic region as president.

During their talks, Xi and Niinisto agreed that the future-oriented new-type cooperative partnership between China and Finland is complementary to the China-EU comprehensive strategic partnership.

The two sides said they will commit themselves to building the China-EU partnership for peace, growth, reform and civilization, promoting the implementation of the China-EU 2020 Strategic Agenda for Cooperation, and boosting Sino-Nordic cooperation.

A joint declaration on establishing and promoting the future-oriented new-type cooperative partnership between China and Finland was issued after the summit talks.

The two heads of state also witnessed the signing of cooperation documents on innovation, judiciary and joint research on giant panda.

China and Finland have enjoyed long-term friendship and cooperation since they forged diplomatic ties 67 years ago.

Currently, China has been Finland's biggest trading partner in Asia for 14 years.