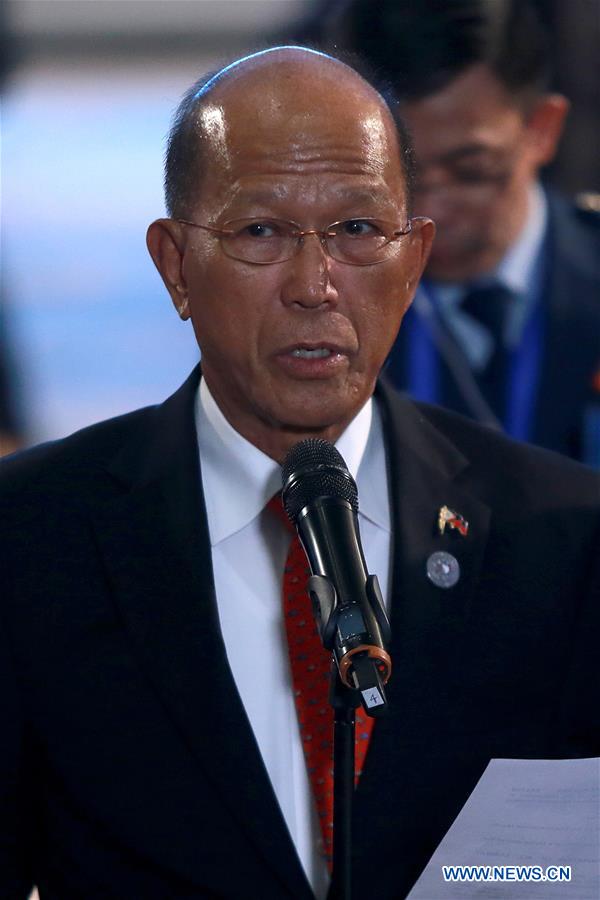 CLARK, the Philippines, Oct. 23 (Xinhua) -- Philippine Defense Secretary Delfin Lorenzana announced on Monday the "termination of all combat operations" in the southern city of Marawi, saying the city has been cleared of the last terrorist.

Lorenzana said government forces have cleared the last building occupied by militants and its vicinity. Forty-two bodies have also been recovered in the last ground assault to completely retake the city from the IS-linked militants.

"The Philippine security forces, aided by the government and the massive support of the Filipino people, have nipped the budding infrastructure and defeated terrorism in the Philippines," Lorenzana told reporters.

"In crushing thus far the most serious attempt to export violent extremism and radicalism in the Philippines and in the region, we have contributed to preventing its spread in Asia and give our share to maintaining global peace, stability, and security," he added.

"While we submit that these tactical and strategic gains will not annihilate the ideology completely, we declare that this achievement is clear manifestation of how our regional cooperation can lead to a decisive advance against the proliferation of terrorism in this part of the world," he said.

Lorenzana shared the news during the Association of Southeast Asian Nations (ASEAN) Defense Ministers' Meeting (ADMM) that kicked off on Monday in Clark Freeport Zone in Pampanga province north of Manila.

Terrorism and violent extremism top the agenda of the ADMM dialogue.

Lorenzana's statement came five months after the Maute Group and Abu Sayyaf militants with the help of IS fighters from Malaysia and Indonesia raided the city on May 23, prompting Philippine President Rodrigo Duterte to declare martial law in the entire Mindanao region.

Lorenzana said the martial law will remain for the moment while the military is assessing the situation in the region.

The military said the conflict has so far killed 961 extremists and 165 soldiers and policemen.

The war has also claimed the lives of nearly 100 civilians and displaced thousands.