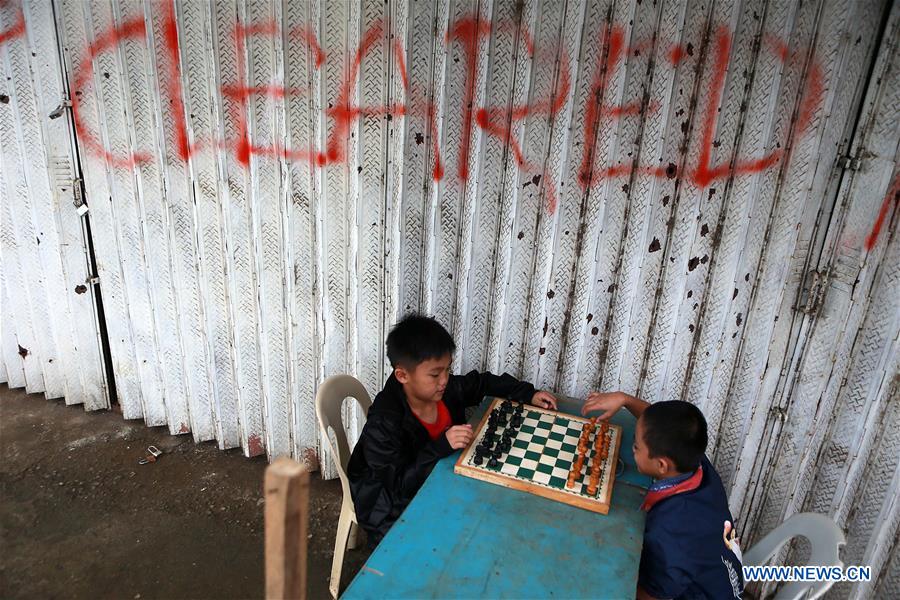 Boys play chess in front of a closed store with a sign indicating that the area has been cleared by government troops in Marawi City, the Philippines, Oct. 18, 2017. Philippine President Rodrigo Duterte declared victory over Islamic State (IS)-linked extremists that took over the southern city of Marawi in May, ending nearly five months of fierce fighting that have killed more than 1,000 people and displaced thousands. (Xinhua/Rouelle Umali)

MANILA, Oct. 18 (Xinhua) -- Philippine Armed Forces chief Gen. Eduardo Ano on Wednesday told the remnants of the Islamic State-inspired Maute Group in Marawi City to surrender, implying they will only end up dead if they continue fighting with government troops.

"We are calling on them to surrender. The only way to get out alive is to surrender," Ano said, referring to the remnants of the group, numbering around 30 men who he referred to as stragglers.

Ano made the statement a day after President Duterte declared the city as already liberated from the clutches of the IS-inspired group. Officials said the remaining terrorists no longer pose a serious threat.

"They are now near the Lanao Lake, this is just one hectare area with structures so we have to be careful. But this area is already small. In fact, the hunt for them is already a law enforcement matter," said Ano.

"But just the same, we will not abandon it. We will make sure that we will get the remaining Maute ISIS members there ... We are not going to stop until we get the remaining stragglers," said Ano of the terrorists who he said are still holding 20 hostages.

Col. Romeo Brawner, deputy commander of the military's Joint Task Force Ranao, said the terrorists will end up dead if they do not surrender.

"It's surrender or die, that is our message," said Brawner of the terrorists. "They are surrounded, even from the lake," he added.

Brawner said fierce fighting between government forces and Maute members were continuing even after the declaration of the liberation of the city.

Brawner said four Maute members were killed and 10 soldiers were wounded in Tuesday's fighting. He said the fighting occurred after President Duterte announced the liberation of the city.

"The firefight is still ongoing. We incurred a lot of injured yesterday (Tuesday), at least 10," he said, referring to the wounded soldiers. "Four enemies were killed. Their death now totals to 854," said Brawner.

A total of 163 soldiers and policemen and 47 civilians have been killed since the fighting broke out on May 23.