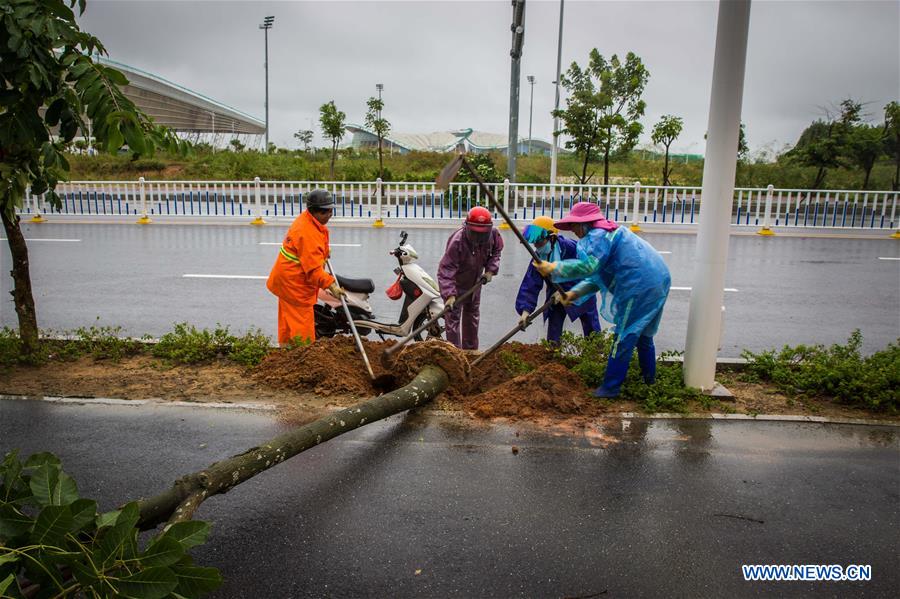 Sanitation workers remove a tree blown down by Typhoon Khanun in Zhanjiang, south China's Guangdong Province, Oct. 16, 2017. Typhoon Khanun, the 20th of the year, made landfall on the country's southern coast at Xuwen County in Zhanjiang City. No casualties were reported until 8 a.m. Monday. (Xinhua/Zhang Ruoxuan)

GUANGZHOU, Oct. 16 (Xinhua) -- Khanun, the 20th typhoon this year, made landfall at around 3:25 a.m. Monday in Xuwen county, south China's Guangdong Province,bring gales of 28 meters per second at its eye, according to local meteorological authorities.

Rain started to fall in some cities in Guangdong from Monday morning, but did not considerably affect the daily lives of locals.

According to Guangdong Flood Control and Drought Relief headquarters, as of 6 p.m. Sunday, more than 368,000 people within heavily affected areas in the province had been relocated, 188 scenic spots in the cities of Zhanjiang, Maoming, Yangjiang and Jiangmen were closed with over 38,200 tourists evacuated, and more than 48,300 fishing boats were pulled ashore.

In Zhanjiang, where Xuwen county is located, work at all 459 construction sites had been suspended, and schools and ferry ports were ordered to shut down.

In neighboring Fujian Province, 17,152 ships with 28,691 crew members had returned to port as of Sunday, while 4,041 coastal residents have been evacuated. Local authorities also closed 51 tourist attractions and 547 construction sites.

In island province of Hainan, schools and kindergartens were asked to remain closed Monday. Some 24,278 fishing boats are taking shelter in port, with 507,764 crew members.

As of 7 a.m. Monday, Khanun had weakened to a tropical storm, and the Guangdong Flood Control and Drought Relief headquarters lowered its emergency response level at 8 a.m.