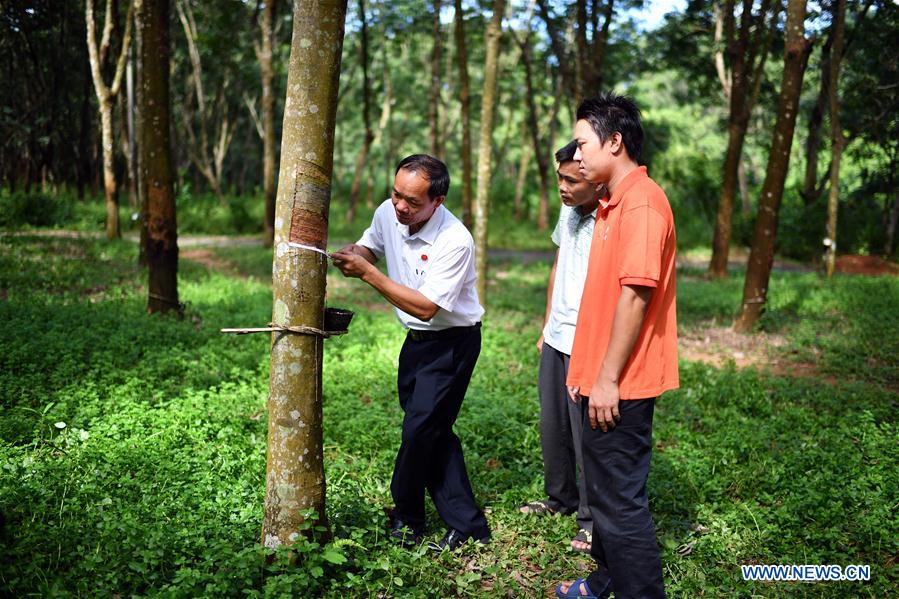 Yang Fengji (L), secretary of the Communist Party of China (CPC) branch of Tianbiao Village, shows rubber tapping skills to young villagers at Tianbiao Village of Baisha Li Autonomous County, south China's Hainan Province, Sept. 29, 2017. Yang has helped local villagers of Li ethnic group escape from poverty thanks to the rubber industry since 1998. Local villagers' per capita annual income reached 9,000 yuan (1,366 U.S. dollars) now, a giant leap from a mere 600 yuan 19 years ago. Yang has been elected as a delegate to attend the Party's 19th National Congress in Beijing from Oct. 18. In about one year, a total of 2,287 delegates have been elected to attend the five-yearly national congress. According to requirements, nominees must be highly qualified politically and ideologically, have good work and life styles, be competent in discussing state affairs, and have been successful in their work. Among them, 771 delegates are from frontline production and manufacturing, including workers, farmers, and technicians, accounting for 33.7 percent of the total, up by 3.2 percentage points from five years ago. These delegates not only come from traditional industries like manufacturing, transportation, steel and coal, but also from sectors such as finance, the Internet, and social organizations. (Xinhua/Guo Cheng)