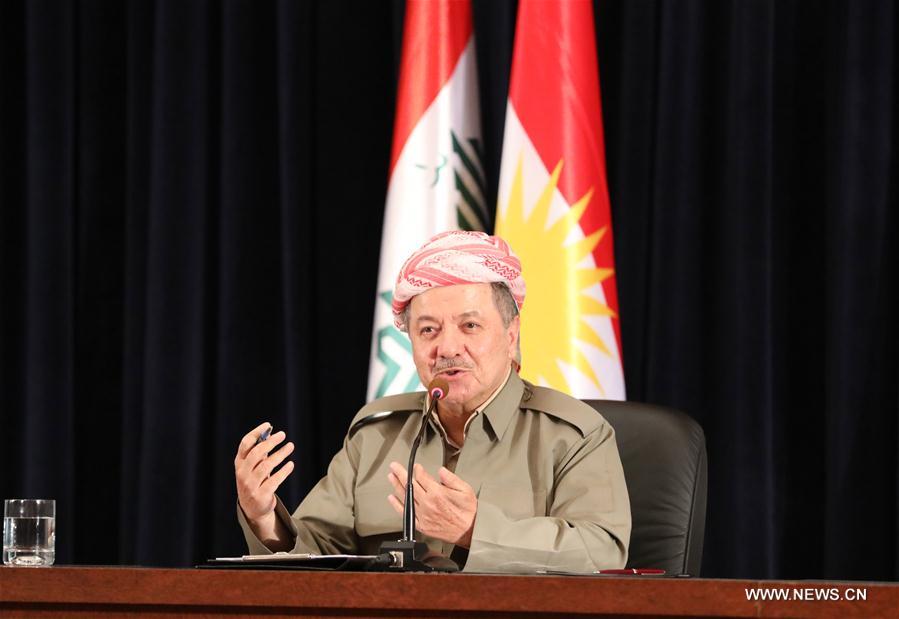 "We have decided to hold referendum and we are going ahead whatever the price would be. We are not going to wait for unknown fate, and will not be subject to pressure and threats," Barzani said during a press conference in Erbil.

"We have reached the conclusion that independence will allow us not to repeat past tragedies," Barzani said in his speech.

He said "the partnership with Baghdad has failed and we will not return to it," said Barzani, who pushed his region toward the referendum on independence despite pressure from Baghdad government, neighbouring countries and Washington to call off the referendum and to negotiate a new deal.

Barzani also said "Iraq was supposed to be a democratic civil state (after 2003), not like what we see a theoretic, sectarian state."

"I urge the people of Kurdistan to go to the ballot boxes to express their views without any problems and to maintain security and order during this democratic experiment," Barzani said.

As for possible military actions against the Kurdish, Barzani confirmed "we don't expect any kind of military conflict with Iraq," he said, adding that such kind of thought "doesn't even cross our mind, but we are ready for everything. We have all the love for the Iraqi army and we are brothers."

Barzani also hoped that Turkey, a strong opponent of the referendum, would not close its border with Iraqi Kurdish region, warning that both sides would be "losers."

He emphasized that the referendum would not establish facts on the ground, but would be a platform for discussion with the government in Baghdad.

"We tried our best to find a solution to these problems in Iraq with Baghdad, with the international community, but Baghdad didn't accept us and they obliged us to take this step that we've taken already," he said.

Barzani said that the referendum is the first step for the people of Kurdistan to decide their future, and "after that, we start a very long process of talks, a year or two years until we will get a good neighbor."

Asked whether the situation would change if the Baghdad government can meet the demands of the Kurds, Barzani asserted the Kurds were "never going back to Baghdad to renegotiate the failed partnership we had in the past."

During Barzani's press conference, Iraqi Prime Minister Haider al-Abadi made an angry response and reiterated his rejection to the referendum on independence of the semi-autonomous region.

"Taking a decision unilaterally that would affect Iraq's unity and making separation from one side is contrary to the law and unconstitutional, and we will not deal with it or with its results," Abadi said in a statement broadcast on the official Iraqiya channel.

"Such insistence will lead to more problems in Iraq and the region," Abadi warned.

"If the Kurdish regional authorities insist on holding the referendum, there will be subsequent steps to protect Iraq's unity," Abadi said without specifying what these steps would be.

On June 7, Barzani announced his intention to hold a referendum on the independence of the Kurdish region from Iraq on Sept. 25.

The independence of Kurdistan is opposed by many countries because it would threaten the integrity of Iraq and because it comes as the Iraqi forces are in fight against the terrorist IS militant group.

In addition, the neighboring countries of Turkey, Iran and Syria see that such a step would threaten their territorial integrity, as larger populations of Kurds live in those countries.