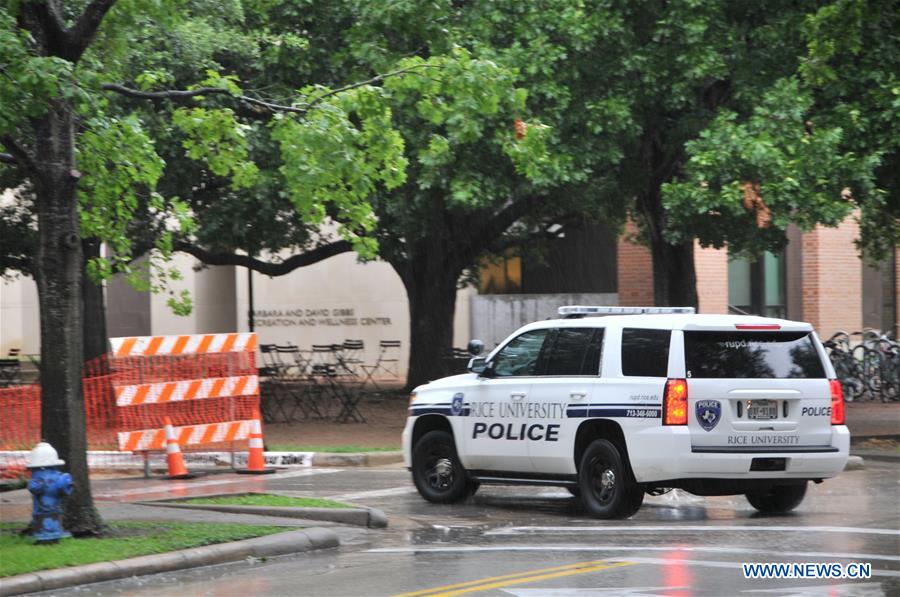 A Rice University-stationed police officer drives a police car patrolling in Rice University, Texas, the United States, on Aug. 2, 2017. The United States has some of the best colleges and universities in the world, but staying safe and avoiding being a victim of crime can sometimes be challenging. Rice University in Houston in the state of Texas has a system in place where students can call police from emergency call boxes throughout the sprawling campus of more than 6,600 students. (Xinhua/Liu Liwei)

HOUSTON, Aug. 17 (Xinhua) -- Many Chinese parents take pride in their sons and daughters' ability to be enrolled in American universities, but staying safe and avoiding being a victim of crime in university campus can sometimes be challenging.

Zhang Yingying, a visiting scholar at the University of Illinois at Urbana-Champaign, was kidnapped on June 9 on her way to sign an apartment lease. The 28-year-old scholar's whereabouts still remains a mystery and the police believe that she is dead.

A suspect in the case, Brendt Christensen, was arrested on June 30 and pleaded not guilty to a felony charge of kidnapping.

It is only one of the criminal cases targeting foreign scholars and students in the U.S. in recent years.

Large colleges like the University of Houston, with about 44,000 students, are often targeted by criminals for robberies and even sexual assaults.

At campuses large and small, police officers are on 24-hour patrol and there are "safe spots" for students to call for help.

Rice University in Houston in the state of Texas has a system in place where students can call police from lighted call boxes throughout the sprawling campus of more than 6,600 students, of which about 10 percent are Chinese.

"You can be anywhere on campus and see at least one blue light ... and run to it and hit the button on the blue light," said Molly Hurley, a second-year student at Rice University. "It calls (campus police) and they'll go straight to your location."

Chinese student Ma Zhiwei, who is in post-doctoral studies at Rice University, said he feels relatively safe while on campus because of the security presence.

"We can often see police cars patrolling on campus," Ma said. "There is also a service called night escort. If you live in university dormitories or very close to the campus, you can ask for the service when you work or study late at night. When you call, they (police) will pick you up and escort you to your dormitory."

Other than security measurements on campus, advice from teachers and senior fellow students are helpful, especially for new students.

Since most of the university campus in the U.S. is open, professor Qiao Fengxiang from Texas Southern university urged students to be more cautious.

"I strongly ask all Chinese students here to pay enough attention to their safety. The campus is fully open, not like the colleges in China," he said.

"Americans travel by automobiles. I don't think bus is a good choice for students. You can buy a car with basic functions, if affordable. If you take bus, try to find one with less passengers. You'd better not go out alone; if alone, be alert," he suggested.

Li Yuntong, a second-year Chinese student in Rice University, said that using common sense is the best way to stay safe on and off campus.

"University police always patrol at night and there is a security alarm light," she said. "It's a little bit dangerous off campus so just try not to be alone, especially after 10 p.m.."

She offered some tips for overseas students staying on campus.

"When applying to universities, remember to check the security situation," she said. "You can also speak to senior students in the university. They are quite experienced and will tell you the resources you can use. There is a lot of useful information on the university website and email as well."

In a related development, a new Texas law took effect in 2016 for all four-year colleges and universities, allowing people who have obtained a concealed handgun license (CHL) to carry their loaded, concealed weapon in buildings at colleges.

The new law is likely to cause potential assailants to think twice before embarking on a campus crime spree, Chief Caldwell said.

"The law requires that if you're licensed to carry, your weapon has to be completely concealed," he said. "I would think that anyone on campus with a knife would certainly think twice because you don't know who's armed around you."