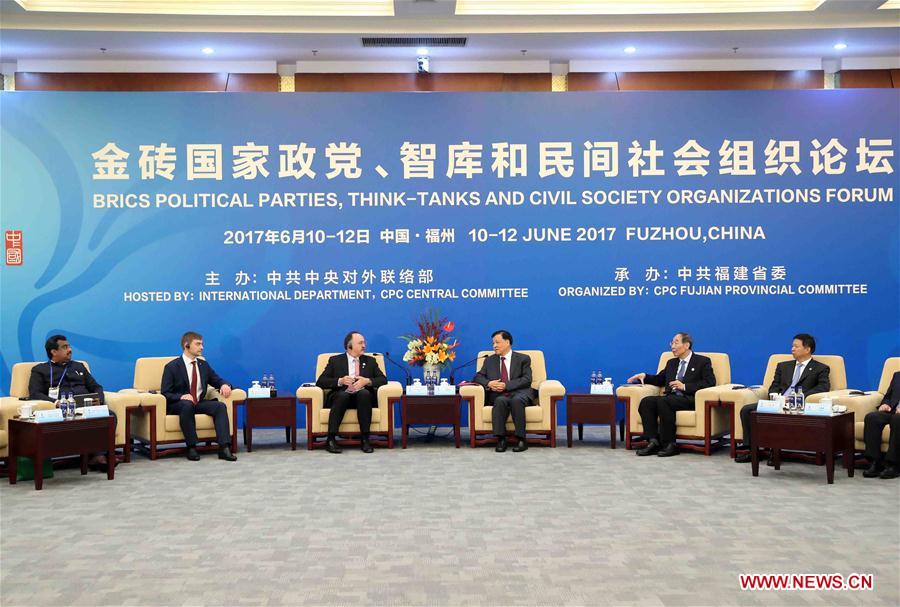 Liu Yunshan, a member of the Standing Committee of the Political Bureau of the Communist Party of China (CPC) Central Committee, meets with foreign representatives before the opening ceremony of the BRICS Political Parties, Think-tanks and Civil Society Organizations Forum in Fuzhou, capital of southeast China's Fujian Province, June 11, 2017. (Xinhua/Liu Weibing)

Liu, a member of the Standing Committee of the Political Bureau of the CPC Central Committee, called on both countries to implement consensus reached by their leaders to boost substantial cooperation in various areas.

Pimentel congratulated the full success of the forum, held from Saturday to Monday. He said the PDP-Laban admires the CPC's achievements and hopes to learn from its governance experience, urging to cement party-to-party exchanges and inject vitality to stable growth of China-Philippines relations.

While meeting with Phankham Viphavanh, a member of the Political Bureau of the Lao People's Revolutionary Party (PRP) Central Committee and vice president of Laos, Liu said currently China-Laos relations are at the best period of time in history, citing enhanced political trust and fruitful cooperation in all areas.

China is ready to work with Laos to deepen exchanges and cooperation at various levels, and to promote bilateral ties up to a new stage, he said.

Phankham said Laos regards China as a trustworthy partner and example for development, adding his country hopes to implement the consensus reached by the two countries' leaders, deepen friendship and upgrade relations between the two parties and countries.

In his meeting with Cambodian Deputy Prime Minister Men Sam An, also member of the Standing Committee of Cambodian People's Party, Liu said China and Cambodia trust and support each other, and their ties have become a model for country-to-country relations, featuring treating each other equally and sharing weal and woe.

Men Sam An spoke highly of Cambodia-China ties and the sound momentum of relations between the two countries and parties. She appreciated China's support, vowing to facilitate all-round cooperation with China.

The forum drew over 400 participants from political parties, think tanks and non-governmental organizations of BRICS and other developing countries.

It aims to build consensus and boost stronger BRICS cooperation through in-depth exchanges, to offer proposals and create a sound environment for the Ninth BRICS Summit scheduled for September in Xiamen, Fujian Province.