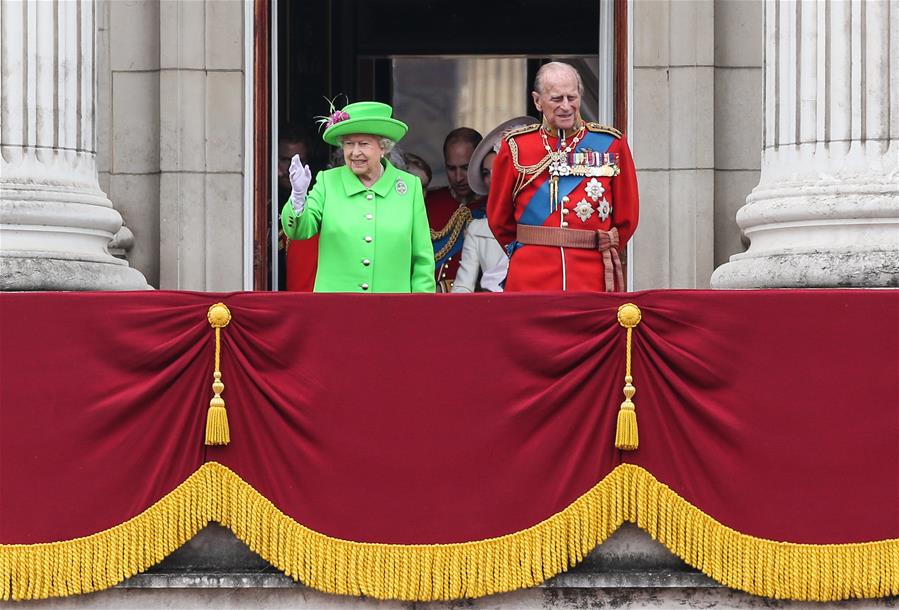 British Queen Elizabeth II (L) and Prince Philip the Duke of Edinburgh view the fly-past on the balcony of Buckingham Palace during the Queen's 90th birthday celebrations in London, Britain in this file photo taken on June 11, 2016. British Queen Elizabeth II's husband, Prince Philip the Duke of Edinburgh, is to retire from royal duties this fall, Buckingham Palace announced here on May 4, 2017. (Xinhua/Han Yan)

Staff from royal residences were summoned to an emergency meeting at the palace to be told of the decision.

Prince Philip, who is just weeks away from his 96th birthday, will continue to fulfill his engagements until he withdraws from public life, and will continue as a patron or member of more than 700 charitable organizations.

The summoning of staff to the palace led to fevered speculation about the royal family, but officials assured that the decision would not be about the health of a member of the royal household. Prince Philip was said to be in good form and looking well during public engagements in London on Wednesday.

The palace, in an official announcement, said the decision was made by Prince Philip himself with the support of Queen Elizabeth II.

In the statement, the palace spokesman said Prince Philip may still choose to attend certain public events from time to time.

His face is one of the most recognized in the world, as he accompanied Queen Elizabeth II, Britain's longest serving monarch, on royal duties around Britain and across the world.

Royal watchers had been wondering how long the royal couple would continue with their schedule of appointments in their advancing years.

In recent times, younger members of the royal household, including Prince William and his wife Princess Catherine, as well as William' s younger brother Prince Harry, have been undertaking more royal duties.

Heir to the British throne, Prince Charles and his wife the Duchess of Cornwall, also carry out royal duties, increasingly on behalf of the Queen.

It has enabled the monarch and her husband to reduce their workload in recent years.

In Thursday's announcement, the palace said Queen Elizabeth II will continue a full program of engagements.

The Queen, as Princess Elizabeth, married Prince Philip in the late 1940s, succeeding to the throne when her father, King George VI, died in 1952. They will celebrate the 70th anniversary of their marriage this coming November. As the world's most famous royal couple, they have visited every continent, and carried out tens of thousands of engagements.