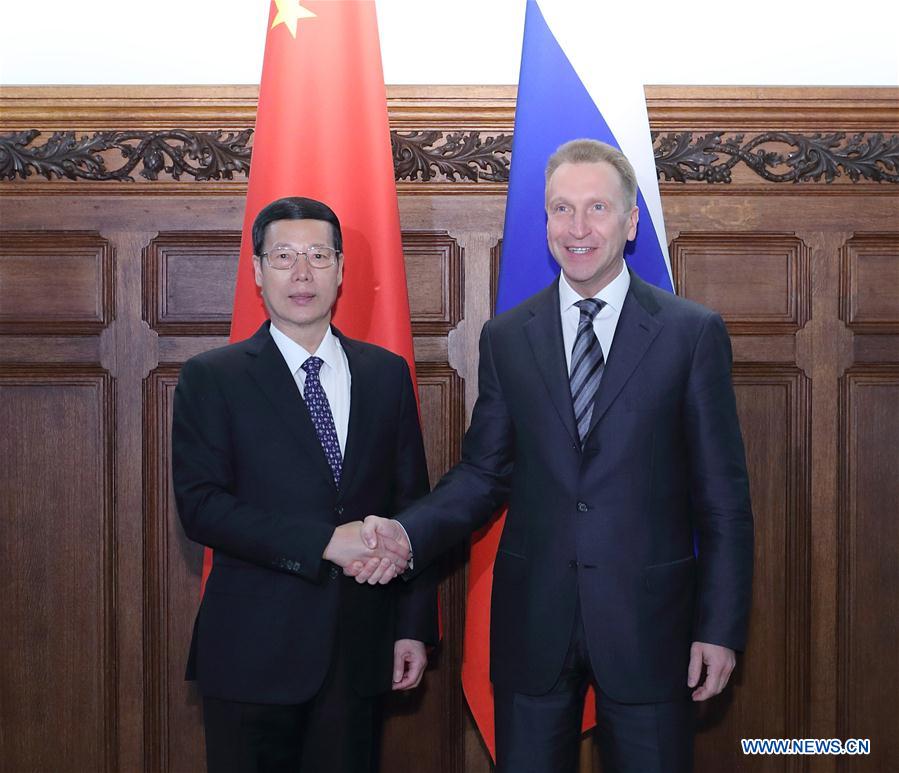 The main task of the committee meeting is to have in-depth discussions about new measures to lift the scale and level of the investment cooperation between the two countries, turning the advantages of high-level political ties into more cooperation results, Zhang said.

The committee meeting is also meant to prepare for meeting between leaders of the two countries later this year, he said.

Zhang put forward three proposals to boost two-way investment cooperation. He called on both countries to further synergize China's Belt and Road Initiative and Russia's Eurasian Economic Union to give full play to the role of investment cooperation on integrating the two sides' interests, complementing resources, synergizing industries, and conducting technology exchanges, among others.

The two countries need to actively explore cooperation on the third-party market, he said.

Besides, Zhang encouraged the two countries to continue to boost cooperation on major projects and properly implement the projects they've agreed upon.

He also suggested both sides enhance regional cooperation and the cooperation between small- and medium-sized enterprises from the two countries.

He said China hopes that the two sides will continue to give full play to the complementary advantages in such areas as resources, market, industry, technology, capital and human resources to benefit common development.

Stressing that Russia attaches great importance to the Belt and Road Initiative and the high-level forum on it to be held in May in Beijing, Shuvalov said Russia would like to further link it with Russia's Eurasian Economic Union.

Russia will closely follow the 73 cooperation projects set up during the fourth meeting and facilitate their implementation, he said, adding that he hopes both Russian and Chinese enterprises will lift their competitiveness on the global market.

During a separate meeting with Dvorkovich, the Russian chair of the China-Russia Energy Cooperation Committee, Zhang expressed the hope for implementing the presidents' consensus on the energy sector so as to better prepare for the two leaders' upcoming meeting through his current visit.

Hailing the sound basis, wide-range areas and great potential of the China-Russia energy cooperation, Zhang said the two countries need to continue to deepen their cooperation, jointly promote the projects including the east-route gas pipeline project and the Yamal liquefied natural gas (LNG) project, and conduct cooperation in areas including gas storage and natural-gas-burning power generation.

Echoing Zhang's remarks, Dvorkovich said the Russia-China strategic partnership of comprehensive coordination is in line with the fundamental interests of both countries and both peoples.

China's economic growth is conducive not only to the recovery and growth of global economy, but also to the pragmatic cooperation between Russia and China, he said.

Russia is willing to work with China to push cooperation in energy and other areas to yield more results, Dvorkovich said.

According to Chinese Customs data, fuel supplies from Russia rose by a quarter last year compared with 2015, up to 1.05 million barrels per day.