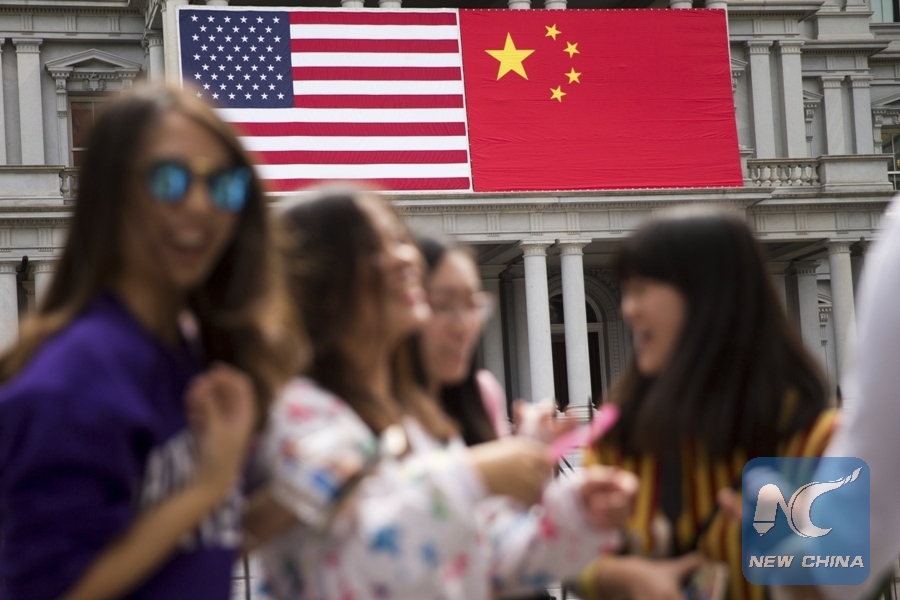 File photo taken on Sept. 24, 2015 shows China's flag is displayed next to the American flag on the side of the Old Executive Office Building on the White House complex in Washington. (Xinhua/AP)

BEIJING, April 6 (Xinhua) -- For global stability, prosperity and governance, nothing may matter more than how the world's two largest economies handle their relationship.

The upcoming meeting between Chinese President Xi Jinping and his U.S. counterpart Donald Trump is expected to set the direction for the development of bilateral ties.

As ballast in the China-U.S. relationship, bilateral economic and trade cooperation has generated huge benefits for people of both sides.

Here are some facts and figures about China-U.S. economic and trade ties:

-- As the world's largest and second largest economies, China and the United States have substantial stakes in nearly all of each other's important economic areas.

-- China has become the largest trade partner of the United States, while the latter is China's second largest. Bilateral trade surged nearly 207-fold to 519.6 billion U.S. dollars in 2016, from the level in 1979 when the countries established diplomatic ties.

-- Such robust growth is due to the complementary nature of the two countries' economic situations and trade structures. Growth of this kind is unimaginable without the presence of mutual benefits.

-- China's trade surplus does not necessarily mean China benefits while the United States loses. About 40 percent of the trade surplus is actually generated by U.S. companies in China. Trade with China helps each American family save 850 dollars every year. Bilateral trade and mutual investment in 2015 created 2.6 million jobs for the United States.

-- As the two countries try to restructure their economies, the structure of bilateral trade is changing. Over the past decade, U.S. exports to China increased 11 percent annually on average, while China's exports to the U.S. rose 6.6 percent. Bilateral trade in the service sector has surpassed 100 billion dollars, with the U.S. maintaining a surplus with China.

-- Bilateral investment amounted to more than 170 billion dollars at the end of 2016, helping boost the economies of both countries.

-- By the end of 2016, U.S. companies had invested nearly 80 billion U.S. dollars in 67,000 projects in China, accounting for 7.8 percent of China's approved foreign-funded enterprises and 4.5 percent of its actualized foreign investment. Around 90 percent of U.S. companies in China have been profitable, according to a report released October by the U.S.-China Business Council based Washington.

-- As China continues reform and opening up, the investment environment for foreign businesses will be further improved and U.S. companies will have more opportunities in the world's fastest-growing consumer market.

-- Investment by Chinese companies, which recorded fast expansion over the past years, has also helped boost growth and employment in the United States.