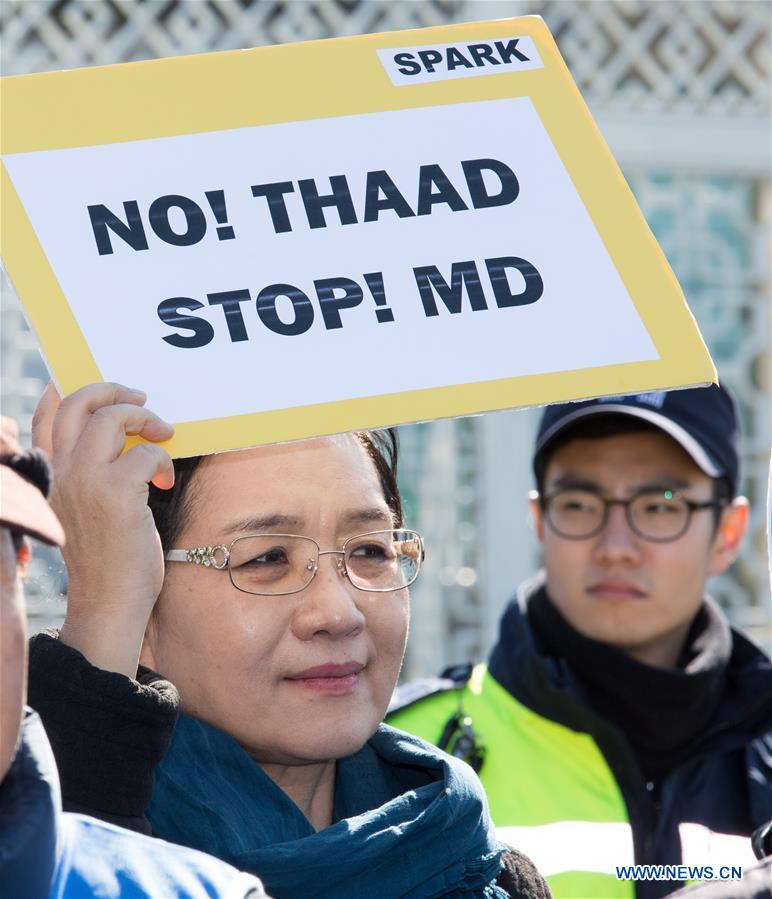 A Korean protester holds a banner during a rally to oppose the plan to deploy Terminal High Altitude Area Defense (THAAD) in front of the Defense Ministry in Seoul, South Korea, March 7, 2017. (Xinhua file photo/Lee Sang-ho)

SEOUL, April 3 (Xinhua) -- Civic and religious groups in South Korea are moving to oppose the deployment of the U.S. Terminal High Altitude Area Defense (THAAD) missile defense system in their territory as they believe it hurts peace on the Korean Peninsula as well as the region and the world.

Five elder leaders of advocacy and religious groups held a press conference in Seoul Monday to make public their six-day trip to the United States in protest against the ongoing installation of THAAD in southeast South Korea.

During their visits, the elder leaders would explain why they are fighting against the THAAD deployment in South Korea and why the U.S. anti-missile system is not aimed at nuclear threats from the Democratic People's Republic of Korea (DPRK).

"Peace will never be achieved by force of arms. It can be done on mutual trust and dialogue," said Ahn Chungsuk, advisor for the Catholic Priests Association for Justice, a religious group composed of Catholic fathers.

Ahn said the THAAD deployment would damage peace in Northeast Asia and the world while dampening efforts to reconcile with the DPRK, demanding the Korean Peninsula issue be resolved through dialogue and diplomacy.

Seoul and Washington agreed in July last year to deploy one THAAD battery in the country's southeast region by the end of this year. The installation date was brought forward as an early presidential election here comes closer following former President Park Geun-hye's impeachment and arrest.

Two mobile launchers and other first elements of THAAD were delivered to a U.S. military base in South Korea at night on March 6. One THAAD battery is composed of six mobile launchers, 48 interceptors, an X-band radar and the fire and control unit.

Late last year, the deployment date was advanced to some time between June and August, and it was put forward further to April ahead of the presidential election on May 9, according to local media speculations.

The South Korean government, which is being led by Prime Minister Hwang Kyo-ahn serving now as acting leader, is suspected of hurriedly pushing the THAAD installation to politicize security issues during the election campaign period.

Voters here tended to support conservative candidates in the past presidential races when tensions mounted on the peninsula. Conservative voters are now supporting the THAAD deployment based on ungrounded beliefs that THAAD is capable of intercepting DPRK missiles targeting South Korea.

"Escalating tensions between people, between the two Koreas and between countries in Northeast Asia is THAAD," said Ahn Jaewoong, reverend member of executive committee at the National Council of Churches in Korea.

He said the power of candlelit rallies would be centered on oppositions to THAAD in South Korea, noting that the deployment decision, made without going through proper procedures, should be cancelled and re-negotiated.

Among about 1,500 civic groups that had led the Saturdays candlelit demonstrations to remove Park from office, some are moving to refocus the people power on the reversal of the THAAD installation decision that was made by the impeached president.

"The power of candles will be centered on oppositions to THAAD. People must determine the fate of THAAD. The final decision must be relayed to next government," said Yang Gun-mo, spokesperson of the 2017 Democracy and Peace Forum, a local civic group.

Lee Samyeol, the civic group's co-chair, said ordinary people were duped into believing that THAAD in South Korea can shoot down incoming missiles from the DPRK, claims made by both the South Korean and U.S. governments.

Civic group activists and religious figures, he said, should make efforts to let people know the truth about the U.S. missile shield that is designed to intercept incoming missiles at an altitude of 40-150 km.

Pyongyang has a technology which is able to avoid the intercepting range of THAAD. Most of DPRK missiles targeting South Korea fly at an altitude of less than 40 km.

Regional countries including China and Russia have strongly opposed the THAAD deployment in South Korea as it breaks strategic balance in the region and damages security interests of regional countries.

Lee added it would put South Korea in a big danger from various perspectives, such as Seoul's loss of Beijing as a friend which is growing fast with great potentials.