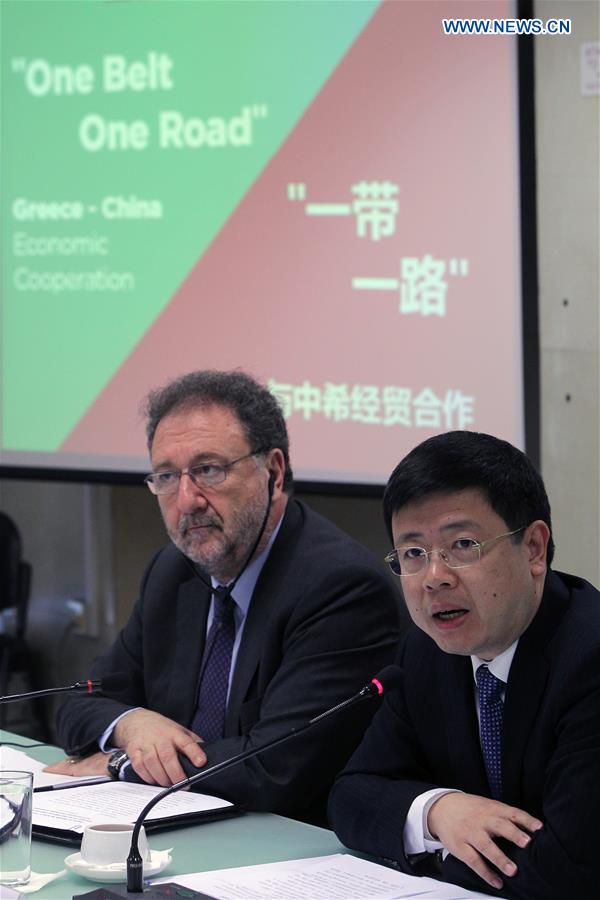 Chinese Ambassador to Greece Zou Xiaoli (R) and Greek Deputy Minister of Economy and Development Stergios Pitsiorlas attend a Belt and Road business workshop in Athens, capital of Greece, on March 27, 2017. Major Chinese companies operating in Greece had the opportunity to discuss prospects and challenges of investing in Greece with Greek state officials during a Belt and Road business workshop held on Monday. (Xinhua/Marios Lolos)

ATHENS, March 27 (Xinhua) -- Major Chinese companies operating in Greece had the opportunity to discuss prospects and challenges of investing in Greece with Greek state officials during a Belt and Road business workshop held on Monday.

"Enhance trust to open a path to success," was the message of Chinese Ambassador to Greece Zou Xiaoli during his opening speech at the investment workshop. "China needs Greece, just as Greece needs China," Zou remarked.

"China highly appreciates the support and active participation of Greece in the Belt and Road Initiative, and is confident that Greece will not only walk out of the debt crisis, but also play a more important role in regional peace and stability," Zou said.

With China COSCO Shipping deal for Piraeus being the most successful infrastructure cooperation project in Greece, Zou expressed his confidence for additional business initiatives from both sides in a wide range of areas including ship building and repair, ports, airports, power, telecommunication, finance, tourism and real estate.

"Greek businesses have also intensified their efforts in exploring the Chinese market," he added.

As China and Greece have common interests in opposing protectionism and promoting economic globalization, Zou highlighted the important role that the two countries can play between East and West.

According to the Chinese ambassador, 2017 marks the year of China-Greece Cultural Exchanges and Cultural Industry Cooperation, while in September, China will be the honored country of the Thessaloniki International Fair.

Addressing Chinese entrepreneurs, Deputy Minister of Economy and Development Stergios Pitsiorlas stated that the strategies of China for the new Silk Road coincide with the Greek government's strategy for a multidimensional role of Greece in the region.

"The future cooperation of the two countries looks very promising," he said.

Pitsiorlas explained that Chinese companies should be informed and updated over the status that exists in Greece, the legislation and the possibilities they have.

"From our side the goal is to create a friendly environment for Chinese companies to come and invest in Greece, to cooperate with Greek companies and to create synergies in order to jointly promote our goals," he stressed.