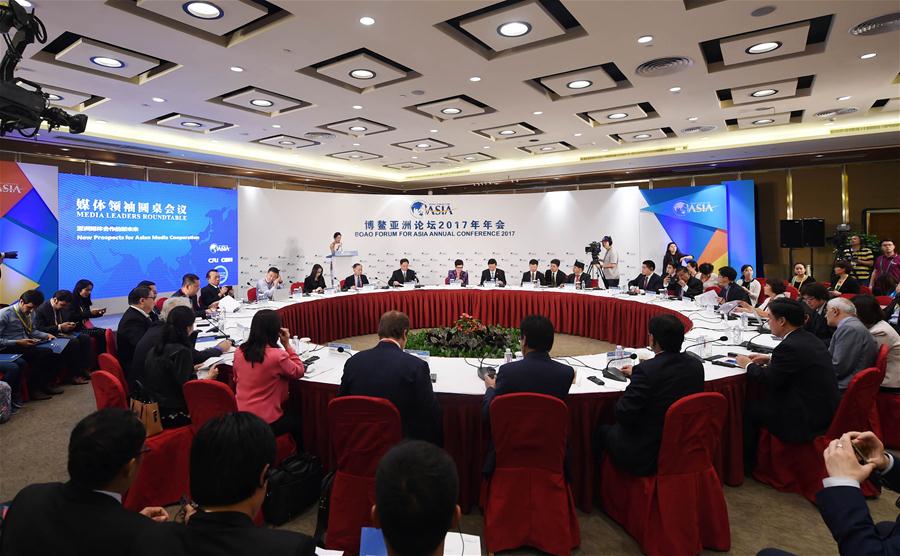 Globalization must not be reversed, Zhou Wenzhong, BFA's secretary general, told Xinhua, adding that the forum will strengthen the case for more inclusive globalization.

The four-day conference, under the theme of "Globalization and Free Trade: The Asian Perspectives," runs until March 26 in Boao in China's southernmost province of Hainan.

"The forum will focus on how developed and developing economies should cope with globalization," he said.

Globalization, an inevitable outcome of rising productivity and technological advances, has driven the world economy and poverty alleviation over past decades, Zhou said.

It has also accentuated the imbalance between growth and distribution, capital and labor, and efficiency and fairness, he added.

Protectionism is gaining ground. In 2016, Chinese exporters suffered a record number of 119 trade remedy investigations initiated by 27 countries or regions, 32 more than in 2015.

The root cause lies not in globalization itself but in an anachronistic global governance system, Zhou said, adding that anti-globalization will only aggravate global economic woes.

How a country accommodates people and industries which are on the losing end of globalization decides its integration with others, said Yao Zhizhong, deputy director of the Institute of World Economics and Politics at the Chinese Academy of Social Sciences.

Generally speaking, globalization is beneficial to emerging economies, and its progress hinges on the management of negative effects, he said.

A LESSON OF HISTORY

As anti-globalization rears its head, East Asia is suffering setbacks in economic integration, according to the BFA annual report.

Asian economies' interdependence in trade and investment has decreased, with a likely retreat in integration of the manufacturing network and financing, according to Lin Guijun, vice president of the University of International Business and Economics.

The biggest hurdle is the lack of a sense of community, Lin said.

The financial crisis that wreaked havoc in Asia's economy two decades ago should serve as a grave reminder that the regional community must unite together when facing a crisis, Zhou said.

More regional cooperation and integration will help Asian countries achieve their development goals, he said, calling BFA a platform for deliberation on Asia's path of integration.

Asia, with its vitality and vision, will inject momentum into the globalization drive, he added, citing a prediction by the International Monetary Fund that Asia will account for two thirds of world economic growth within the next four years.

At the end of 2016, the BFA held a conference in Melbourne, Australia to explore the future of globalization. Participants agreed that globalization should be more inclusive to benefit groups marginalized in this process.

"The Belt and Road Initiative, in a sense, is China's answer to such globalization," Zhou said. The initiative was proposed by China in the hope of creating a trade and infrastructure network connecting Asia with Europe and Africa along ancient trade routes. Participants in the initiative will merge in a community of shared destiny, he added.

The initiative has won support from over 100 countries and international organizations, with nearly 50 cooperation agreements signed.

It has added a new dimension to the solution of integration by stressing infrastructure and connectivity on the basis of free trade and investment, Lin said.

The value of infrastructure projects rose 47 percent in 66 countries and regions that fall under the initiative in 2016, according to accounting firm PwC.

The scheme has promoted economic and trade cooperation and has offered a new way to tackle the anti-globalization trend, according to BFA's annual report on the development of emerging economies.

The initiative will continue to be a key topic of the BFA, between state leaders and senior government officials, as well as between CEOs and ministers from China and other countries along the route.