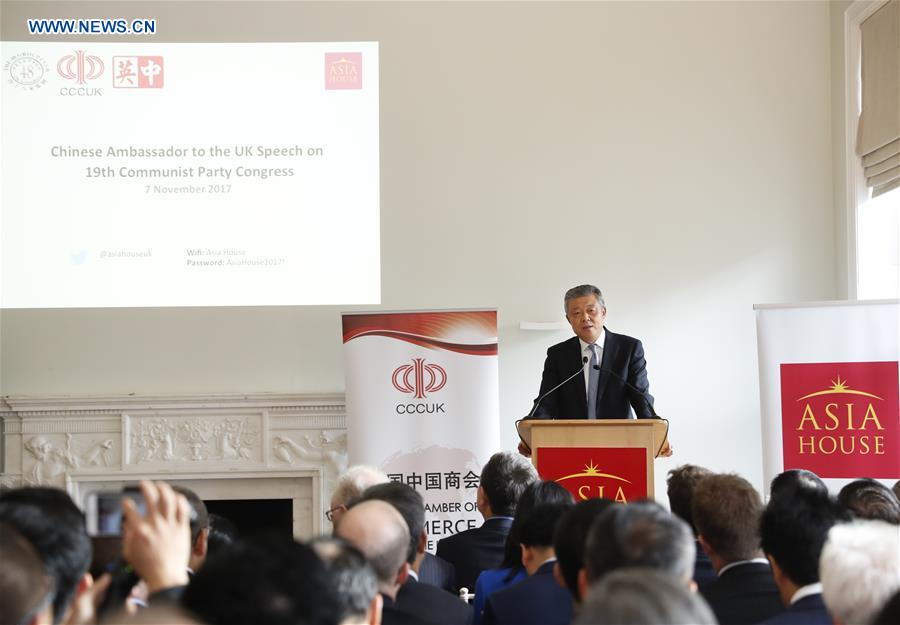 Chinese Ambassador to Britain Liu Xiaoming delivers a speech to British and Chinese entrepreneurs, journalists and politicians at Asia House in London Nov. 7, 2017. The recent 19th National Congress of the Communist Party of China has brought the world China's wisdom and opportunities, Liu Xiaoming said on Tuesday. (Xinhua/Han Yan)

Liu made the comments while addressing British and Chinese entrepreneurs, journalists and politicians at Asia House, a renowned institution in London committed to promoting engagement between Asia and Europe.

He said that the report delivered by Xi Jinping, general secretary of the CPC Central Committee and president of China, at the opening session of the congress demonstrated both a historical vision and a global perspective as those attending the landmark event clearly have a "map of the world" in their minds.

Xi Jinping Thought on Socialism with Chinese Characteristics for a New Era, which has been enshrined in the CPC Constitution, is the "summary and development of China's path, system, theory and culture," he said.

"China has made much progress in building socialism with its own features, which has expanded the horizon for developing countries seeking modernization," he added, pointing out that countries that want to speed up their development while preserving their independence are given a new option.

"China is committed to forging a new form of international relations featuring mutual respect, fairness, justice and win-win cooperation," he said. "China will never repeat the old trajectory, namely, 'the winner takes it all' or 'strength leads to hegemony'."

The opportunities China offers also enrich the win-win cooperation in the world, he said, stressing that China will continue to open up to the world, which is a fundamental policy.

"In particular, we are working actively to advance international cooperation on the Belt and Road Initiative," he said. "We work for more open, inclusive and balanced economic globalization, and we believe the benefits of globalization should be shared by all."

The Belt and Road Initiative, proposed by Xi in 2013, comprises an overland Silk Road Economic Belt and a 21st Century Maritime Silk Road and aims to revive and expand cooperation and exchanges along and beyond the ancient Silk Road routes, which nurtured trade between Asia and the outside world in the past.

At present, China is the largest trading partner of more than 120 countries and regions. China is also the world's second largest investor and one of the top prospective destinations for foreign direct investment.

China's investment and trade activities create 15 million jobs worldwide every year, including 180,000 jobs in the countries along the Belt and Road routes, according to the ambassador.

Liu said he hopes that the British business community will learn more and in greater depth about the progress and changes taking place in China in the new era and will be more actively engaged in building the "golden era" of China-Britain relations.