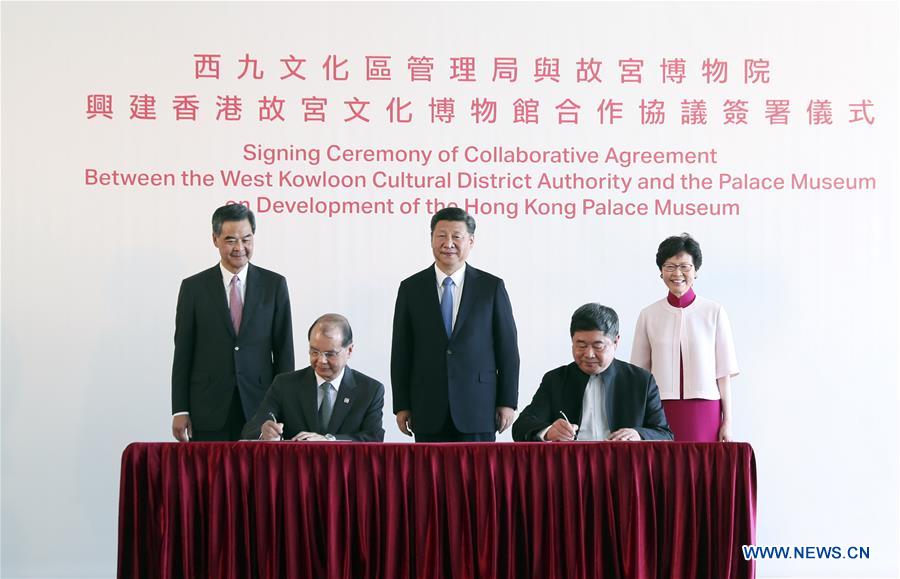 The mainland and the Hong Hong Special Administrative Region (HKSAR) will carry out cooperation in areas including relic display, personnel training and people-to-people exchange, according to the agreement.

Xi showed great interest in the cultural and art development of Hong Kong, and was briefed on the planning of the West Kowloon Cultural District and the site selection and building of the Hong Kong Palace Museum.

The district can not only provide local residents with a convenient cultural and entertainment site, but is also conducive to the cultural and innovative industry development in the HKSAR, Xi said.

The president said that he hoped the HKSAR can carry forward the traditional culture, play its role as a platform facilitating the Chinese and Western cultural exchanges, and promote cultural exchange and cooperation with the mainland.

Xi watched some selections of Cantonese opera performed by children. He said that traditional cultural forms including Cantonese opera had new development opportunities after Hong Kong's return to the motherland.

He encouraged performers in Hong Kong and the mainland to carry out more exchanges with and learn from each other.

Xi arrived in Hong Kong earlier Thursday for a three-day trip to attend celebrations marking the 20th anniversary of Hong Kong's return to the motherland, and the inauguration of the fifth-term government of the Hong Kong Special Administrative Region. He will also inspect the special administrative region.