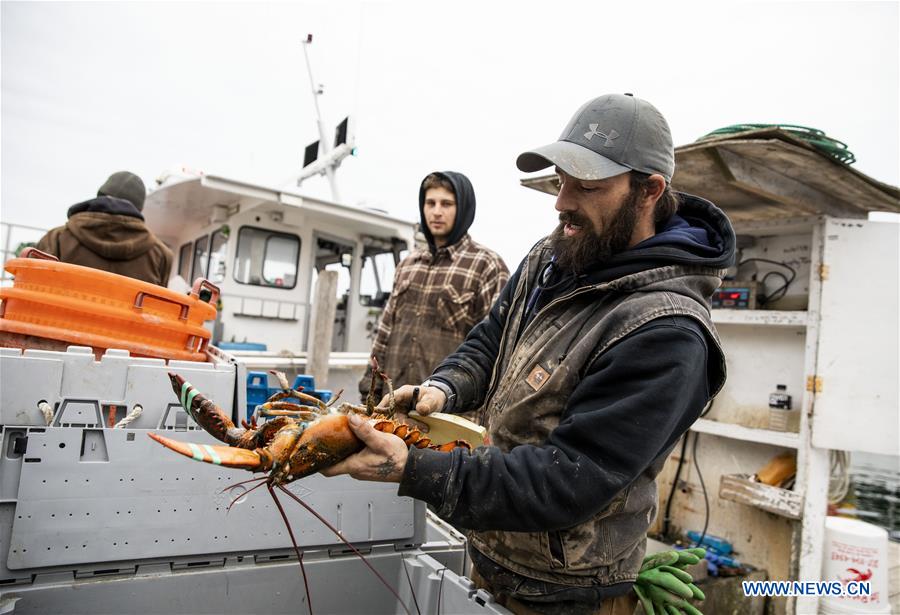 A worker of Stonington Lobster Coop examines a lobster at a dock in Stonington of Maine, the United States, Feb. 4, 2020. Lobster dealers from the northeastern U.S. town of Stonington, Maine, were excited to learn that the China-U.S. phase-one economic and trade deal came into effect on Feb. 14. According to the deal, China promises to purchase more agricultural products from the United States, and lobster is highlighted in the sector. (Xinhua/Wang Ying)

NEW YORK, Feb. 18 (Xinhua) -- Hugh Reynolds, a lobster dealer from the northeastern U.S. town of Stonington, Maine, was excited to learn that the China-U.S. phase-one economic and trade deal came into effect on Feb. 14.

"I hope to resume business with China soon," said Reynolds.

According to the deal, China promises to purchase more agricultural products from the United States, and lobster is highlighted in the sector.

Having been in the industry for more than 20 years, Reynolds' company, Greenhead Lobster, is one of the largest lobster wholesalers in Stonington, a town long-known for its rich and historic tradition of lobstering.

"Our Stonington, Maine Lobsters are fresh caught by local fishermen, delivered daily to the Greenhead Docks, promptly prepared, packed and shipped," the company said on its website.

His Chinese partners in Beijing, Shanghai, Guangzhou and many more cities loved his products. More than 200 boats used to go out lobstering for Greenhead Lobster every day, with an annual harvest of 10 million pounds of live lobsters, of which more than 30 percent had been shipped to China.

Reynolds remembered that in July 2018, China imposed 25 percent additional tariff on imported U.S. lobsters in response to the U.S. threat of an additional 25-percent tariff on Chinese imports worth about 50 billion U.S. dollars.

"That's when all of our exports to China stopped," he told Xinhua in an exclusive interview.

Many wholesalers like Greenhead Lobster faced the same difficult situation.

China imported about 128 million dollars worth of live lobsters from the United States in 2017, according to WISERTtrade, a database that tracks international trade.

Annie Tselikis, executive director of the Maine Lobster Dealers' Association, said China accounted for 15 percent to 20 percent of the export value of U.S. lobsters at the time.

The figures dropped drastically after the additional tariffs took effect.

Data showed U.S. lobster exports to China in the first half of 2019 dropped by 80 percent compared to the same period in 2018.

There were roughly 4,500 licensed lobster catchers in the state of Maine and about 10,000 to 12,000 people are directly employed in the industry in June 2018. But then some lobster dealers in Maine had to lay off workers to make ends meet.

Meanwhile, business is booming in Canada, where cargo planes are flying out of Halifax to China. Canadian fishermen catch the same species of lobster as American lobstermen do, who are based mostly in Maine.

Soon after China and the United States signed the phase-one deal that includes a lobster provision, U.S. Senator Susan Collins called it a significant victory for Maine lobster in a press release.

Collins had been lobbying for the Maine lobster industry ever since the additional tariffs were imposed.

Tselikis said in the statement that "China presents incredible opportunity for the coastal Maine economy and regaining access to that market is essential for our long term growth."

While the Maine lobster industry is looking forward to re-entering the Chinese market, industry insiders know it is very difficult to regain its lost market share quickly.

Reynolds said for the past one year and a half, U.S. lobster industry not only lost export volume to China, but also import volume from Canada -- something he had never seen in his whole career.

Now that Canada has taken most of the U.S. share and the whole supply chain has been moved, it will not be easy to get it back, Reynolds said, adding that he does not support tariff hikes as such measures only hurt business.

Ronnie Trundy, manager of Stonington Lobster Co-op, said, "I think it's going to take a year for the American companies... to get their fair share of the market back."