Interview: "There's plenty of opportunity for everyone" -- mayor of U.S. inland port city 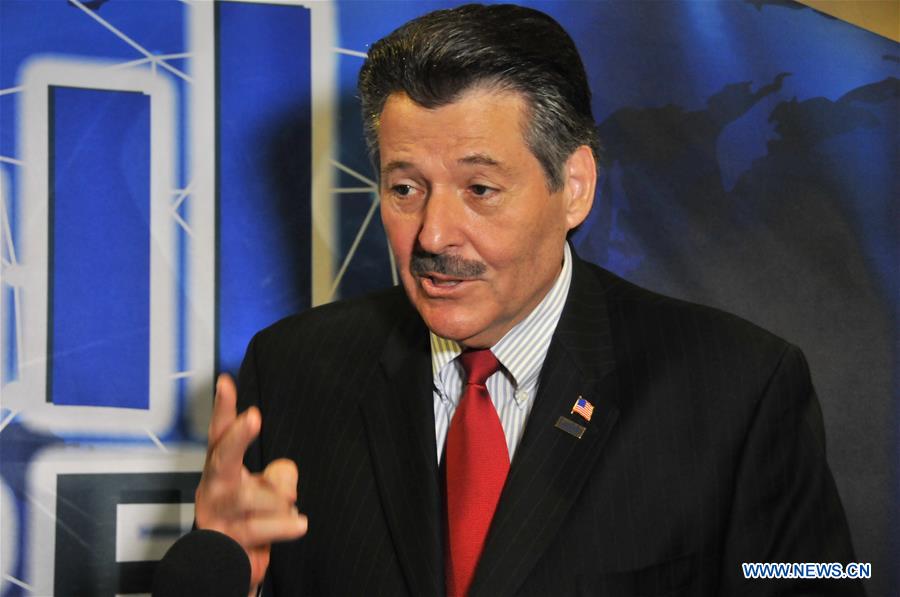 Mayor of Laredo Pete Saenz receives an interview with Xinhua, in Laredo, Texas, the United States, Sept. 19, 2018. The mayor of Laredo, Texas, a major inland port on the U.S. border with Mexico, has said that his city is open for business and that Chinese business people and investors are welcome.

LAREDO, the United States, Sept. 21 (Xinhua) -- The mayor of Laredo, Texas, a major inland port on the U.S. order with Mexico, has said that his city is open for business and that Chinese business people and investors are welcome.

"There's plenty of opportunity for everyone," Pete Saenz, mayor of Laredo, said in an interview with Xinhua on the sidelines of this year's North American Logistic and Manufacturing Symposium in Laredo, a two-day symposium that concluded on Thursday.

The bustling border city with a population of only about 250,000 is one of the busiest ports in the United States. Thousands of trucks pass through the city to and from the World Trade International Bridge, a 14-lane span over the Rio Grande, a narrow, long river on the border between the United States and Mexico.

More than 2.5 million trucks crossed over the bridge in 2017, with the imports and exports going through Laredo worth 557 billion U.S. dollars, according to the Laredo Economic Development Corporation.

Saenz said that Laredo has had some visitors from China, and Laredo has the infrastructure in place, including an expansive road and rail system, and land available for development.

The annual North American Logistic and Manufacturing Symposium takes on the theme of "Supply Chains in the New Global Reality" this year, with the impact of the rapidly changing political climate in focus.

Around 200 politicians, businesspeople and scholars from the United States, Mexico and Canada attended the symposium and discussed international trade and its future direction amid growing trade tensions.

But Laredo downplays the significance of the trade frictions, though they could dampen prospects of international companies doing business with Laredo.

"Come see the border and see if it suits your needs," said the mayor, who has worked hard to pitch his city for business and trade. "And if it doesn't we'll talk, and we'll make it suit your needs."