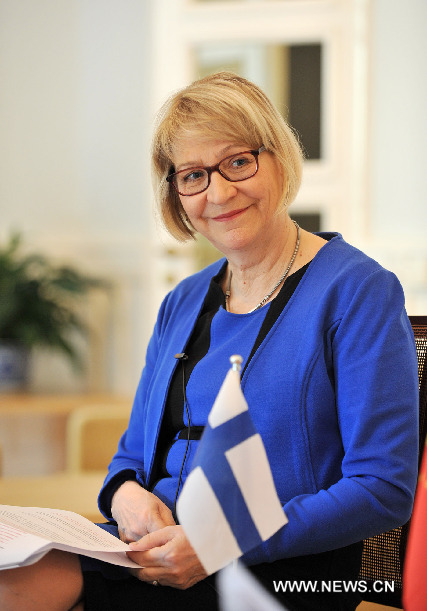 BEIJING, March 13 (Xinhuanet)-- The international community welcomes China's Belt and Road Initiative, especially during a time when the world is looking for new engines of growth, Finnish Ambassador to China Marja Rislakki has said recently in an exclusive interview with Xinhuanet.

“This kind of initiatives can help to synchronize different development plans better together,” the ambassador commented.

She also praised the "Belt and Road Forum for International Cooperation" scheduled in May, saying it serves as a good platform to further discuss the initiative’s content, policies and development, adding that the initiative has already aroused the discussion inside the Europe Union about “how to best increase inter-regional connectivity.”

“In Finland we support the idea that connectivity covers a wide spectrum of issues: not only infrastructure but also energy, ICT (information and communication technology), regulatory framework and people-to-people contacts,” she said.

It is very important that all the development plans and projects along the trade routes are sustainable and inclusive, she added.

She also saw China’s potential to play a major-country role in global governance to lead the world on combating climate change with its “ambitious domestic climate and environmental targets” and better cooperation with the EU.

The ambassador recognized China’s hard work on improving environment by setting new environmental protection law and putting great emphasis on the green industry in the 13th Five Year Plan, while also predicted green economy to be next big thing in China, given the environmental challenges China is facing.

Finland used to face its own environmental problems but with strict legislation, it managed to create a new green industry which forms one of its strongest cornerstones of its current economy, she said.

Speaking of the bilateral relationship, the ambassador stressed Finland already has China as its most important trade partner in Asia and keeps a lively high-level bilateral communication.

The importance of China for Finland’s trade is only going to increase in the years to come, especially in the sectors of digitization, clean tech, health, education, as well as sport development, the ambassador said.

She mentioned several achievements in 2016 in fields like bio-energy and bio-economy, and saw Beijing 2022 Winter Olympics as another good platform for comprehensive cooperation, from athletes training, clothing to infrastructure design.

“We welcome both of these positive developments,” She said.