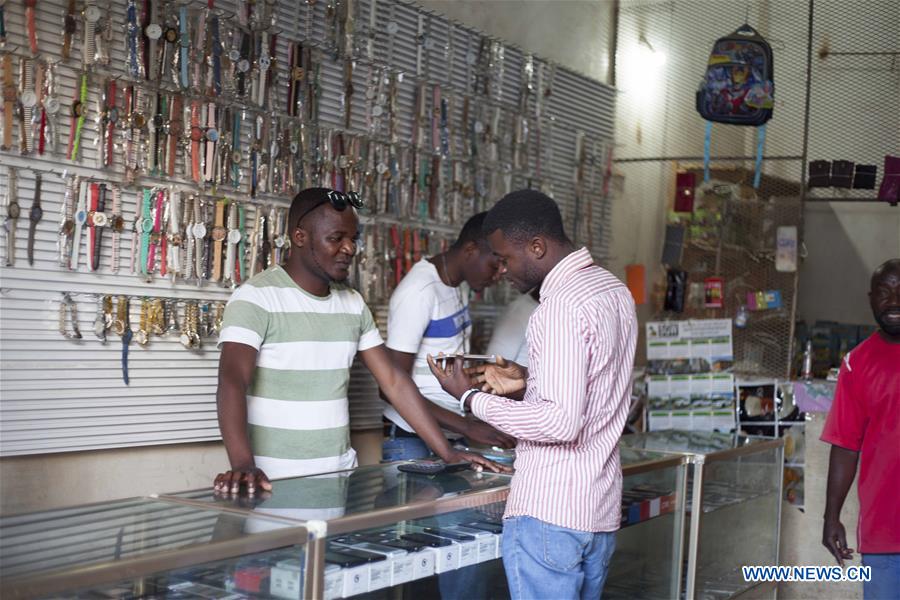 A shop assistant serves a customer in a shop at Limbe market in Blantyre, Malawi, on Sept. 24, 2020. Shop owners in Blantyre city have reacted differently over the city council's clean up exercise which saw street vendors being chased out of the streets. (Photo by Joseph Mizere/Xinhua)

BLANTYRE, Malawi, Sept. 26 (Xinhua) -- Shop owners in Blantyre city have reacted differently over the city council's clean up exercise which saw street vendors being chased out of the streets.

In a recent development, the Blantyre city council officials in conjunction with the police mobile force chased out all the vendors who were doing their businesses in prohibited spaces in the town.

Commenting on the development, Mark Dunga, owner of a plastic shop in Limbe, hailed the council officials for removing the vendors from the shop premises citing that the development will aid them several advantages.

"The moving out of vendors from the street has rendered us some benefits as business people, before the vendors were moved out from the street, it was very hard to distinguish a vendor and a thief, most of times thieves ware hiding within, hence theft and robbery cases become rampant. Now that they are gone, it will be easy for us to do business because customers will now be able to walk into our shops freely without being intimated by the vendors," he said.

According to Blantyre city council, the vendors ware chased out of the streets because they defied the council's order to vacate from undesignated markets.

Commenting on the same, Joseph George, a shop manager at Xiao Wei in Limbe expressed worries with the development, saying that the move is going to slow down their business.

"Most of the times, vendors within the streets act as middlemen by selling items which are often hard to find within the streets. Before removing the vendors, it was very easy for us to sell our items because people were relying on these vendors than shops," he said.

Meanwhile, the city council has opened a new place in Limbe where all the vendors are expected to be given business spaces for them to do their businesses freely. Many people have praised the idea, saying it will solve the shortage of space in the main markets around Blantyre. Enditem