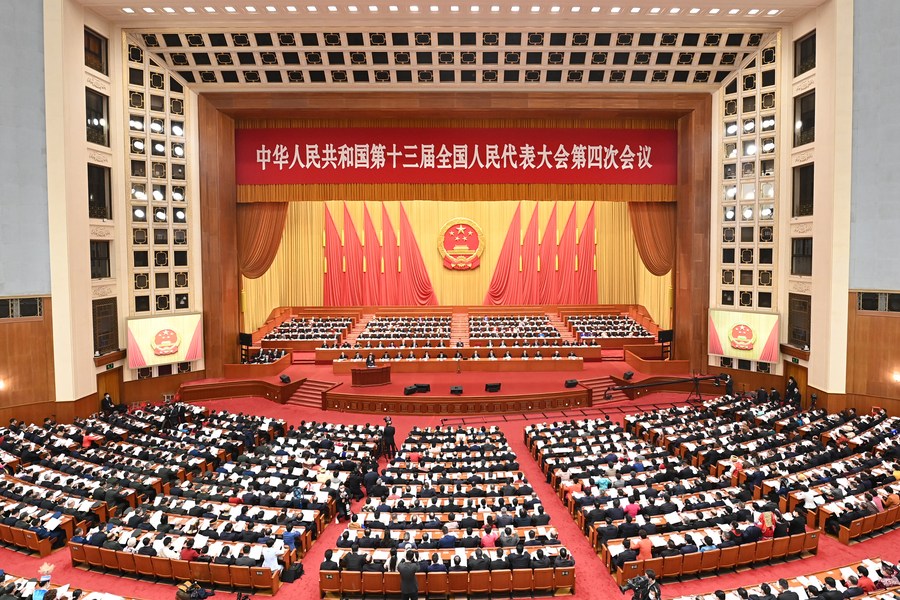 The fourth session of the 13th National People's Congress (NPC) opens at the Great Hall of the People in Beijing, capital of China, March 5, 2021. (Xinhua/Li Xiang)

BEIJING, March 5 (Xinhua) -- China's lawmakers on Friday started reviewing a national blueprint featuring high-quality development, technological innovation and a greener future for the country that has long been seeking modernity and national rejuvenation.

The draft outline of the 14th Five-Year Plan (2021-2025) for National Economic and Social Development and the Long-Range Objectives Through the Year 2035, which specifies the main goals and tasks for the world's second-largest economy in its march toward modernization, was submitted to the fourth session of the 13th National People's Congress (NPC), the top legislature.

The long-range objectives are unveiled as China embarks on a journey toward its second centenary goal of "building a modern socialist country that is prosperous, strong, democratic, culturally advanced and harmonious."

"China will basically achieve socialist modernization by 2035," according to the draft outline, dubbed an action plan for the whole nation.

The blueprint provides a glimpse of a future life where a scaled-up network of 5G and high-speed railways closely knit the world's most populous country, and scientists explore new frontiers in areas including next-generation artificial intelligence, quantum information and gene technology as well as integrated circuits.

In a "smart, shared and harmonious new digital life," robot waiters and highly-automated parking lots will not be unfamiliar for Chinese, according to the draft outline.

With its GDP having exceeded the 100-trillion-yuan (15.42 trillion U.S. dollars) mark in 2020, China's future development path becomes clearer in the midst of major changes unseen in a century.

The key document includes an array of benchmark economic indicators including an economy running within an appropriate range, an annual 7-pct-growth of the R&D spending, a surveyed urban unemployment rate that will be kept below 5.5 percent, and drastically-slashed carbon dioxide emissions per unit of GDP in the next five years.

"The major benchmark indicators set in the draft outline (for China to achieve) are just like peaches on a tree that can only be picked if one jumps hard," said He Lifeng, head of the National Development and Reform Commission. "And we have to jump hard." 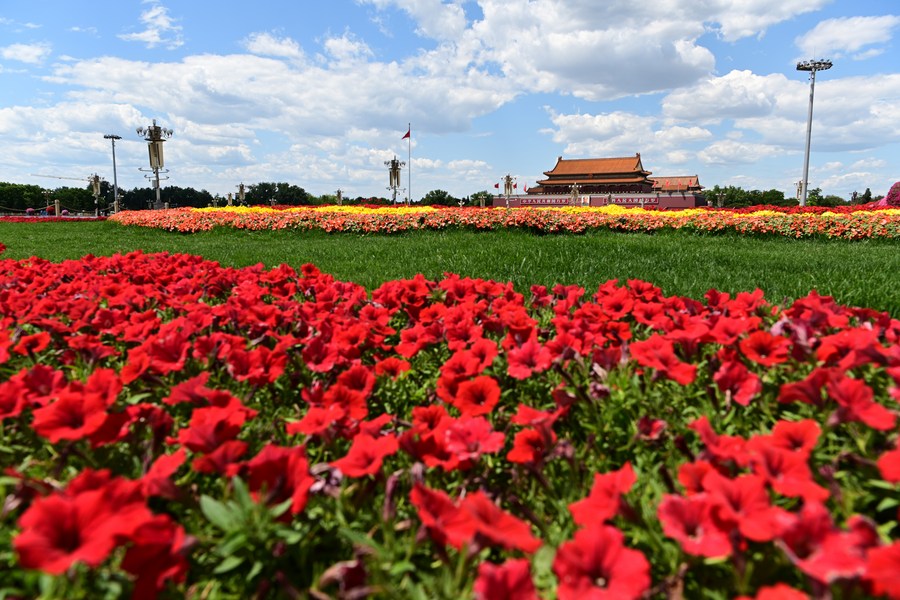 File photo shows a view of the Tian'anmen Square in Beijing, capital of China. (Xinhua/Liu Jinhai)

The development plan, a crucial tool for the macroeconomic governance in a country that gives a decisive role to the market in the allocation of resources, highlights China's new development paradigm of "dual circulation" where domestic and overseas markets reinforce each other with the domestic market as the mainstay.

China will put its development focus on the real economy, accelerate the building of its strength in manufacturing and develop strategic emerging industries including information technology and new energy, according to the draft outline.

In the next five years, technological self-sufficiency and self-improvement will serve as a strategic underpinning for national development, it says.

It also targets improved well-being of the people by improving childcare, boosting employment, actively responding to population aging, and raising average life expectancy by one year.

The outline, which will be reviewed by lawmakers at the ongoing NPC session, signals that socialist modernization, different from its Western counterpart, is no longer out of reach for Chinese people.

"Modernity has always been pluralistic, and there is no unified plan for modernization," said Chen Shuguang, professor at the Party School of the Communist Party of China Central Committee. "It is increasingly clear that the modernization China seeks will not be a mere replica of the Western one." ■