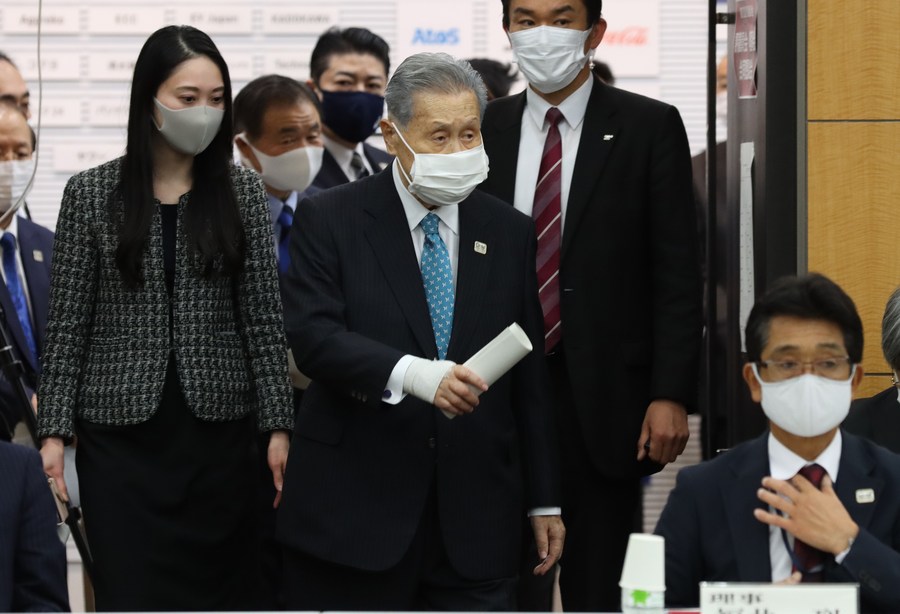 Mori Yoshiro (C), president of Tokyo Organising Committee of the Olympic and Paralympic Games (Tokyo 2020), arrives at a meeting with council and executive board members at the committee headquarters in Tokyo, Japan, on Feb. 12, 2021. Tokyo 2020 organizing committee president Mori Yoshiro has announced his resignation on Friday due to protests over his sexist remarks about women last week. (Tsuno Yoshikazu/Pool via Xinhua)

Tokyo 2020 organizers will decide whether to allow foreign spectators at the games by the end of March.

TOKYO, March 3 (Xinhua) -- Tokyo 2020 organizers will decide whether to allow foreign spectators at the games by the end of March, said organizing committee president Seiko Hashimoto here on Wednesday.

Hashimoto, who took over as the president two weeks ago, told reporters after a five-party meeting that it was agreed that the decision on overseas spectators will be made "by the end of March."

She stressed that all sides have agreed that holding the games in a safe and secure way is the "top priority."

Although the timeline has been set at the meeting, Hashimoto said that the decision should be made as early as possible.

"I personally wish to have it decided by March 25 before the Olympic torch relay starts," she said.

Regarding the capacity of spectators during the games, she said that a decision will be reached by the end of April.

She said that the issue on "holding the games with zero spectators" was not discussed at the meeting, indicating that the games will not be held behind closed doors even if overseas visitors are not allowed into Japan. ■