-- In the face of production shortfalls across the world, some rich countries are hoarding vaccines, leaving poorer ones defenseless in the face of the deadly pathogen. As of mid-January, high-income countries, which represent only 16 percent of the world's population, had taken 60 percent of available doses.

-- Experts said closing the immunity gap is not only about morality and conscience, but also the key to stopping the pandemic by cutting risk of more new variants.

-- In the spirit of "working together as one global family," China is actively cooperating with other countries to speed up vaccine development and production, so as to help relieve the global shortfalls of life-saving vaccines and address disparities in vaccine distribution.

HONG KONG, March 3 (Xinhua) -- "United we stand, divided we fall" -- the choice that was put in front of the international community time and again now popped up once more in the face of the COVID-19 pandemic that has claimed more than 2 million lives worldwide.

Although the successful development of vaccines in less than a year has been a "stunning scientific achievement" that is giving the world hope to end the pandemic, it has at the same time added a "brick in the wall of inequality between the world's haves and have-nots," said World Health Organization (WHO) Director-General Tedros Adhanom Ghebreyesus.

To fight together with the international community in solidarity against the common health crisis, China has been making an all-out effort to promote the fair distribution of COVID-19 vaccines, honoring its commitment to making Chinese COVID-19 vaccines a "global public good" accessible and affordable to people around the world. 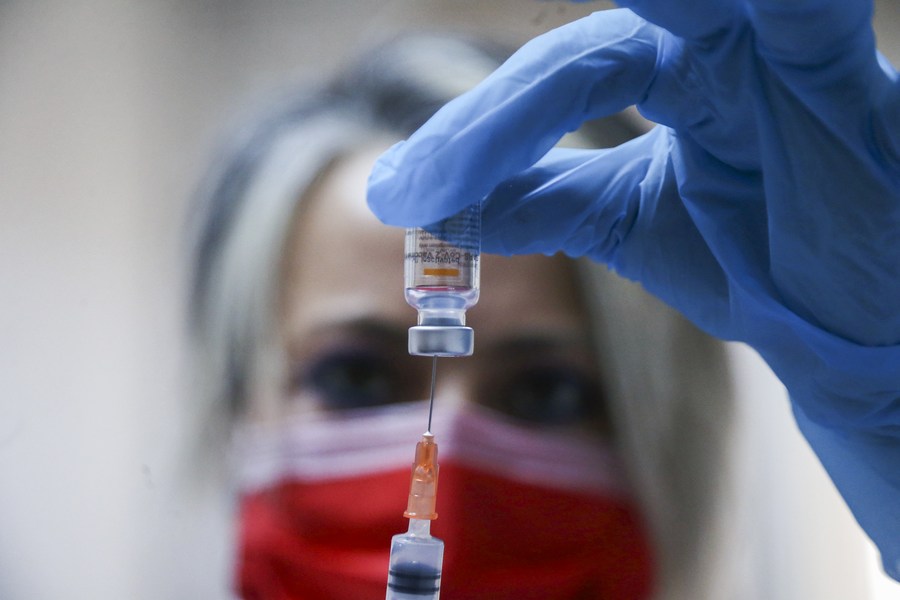 Last month, Japan kicked off its vaccination campaign with imported vaccines. While healthcare workers and elderly citizens are put in the first place to be inoculated, others have to wait until summer, if only vaccine import could be stable.

Growing nationalism over supplies of COVID-19 vaccine shots could lead to retaliation and disruptions to global supplies, Kono said, adding if the public cannot receive the shots as planned, the Japanese government will face a great challenge on how to inaugurate the already delayed Tokyo Olympics in July. 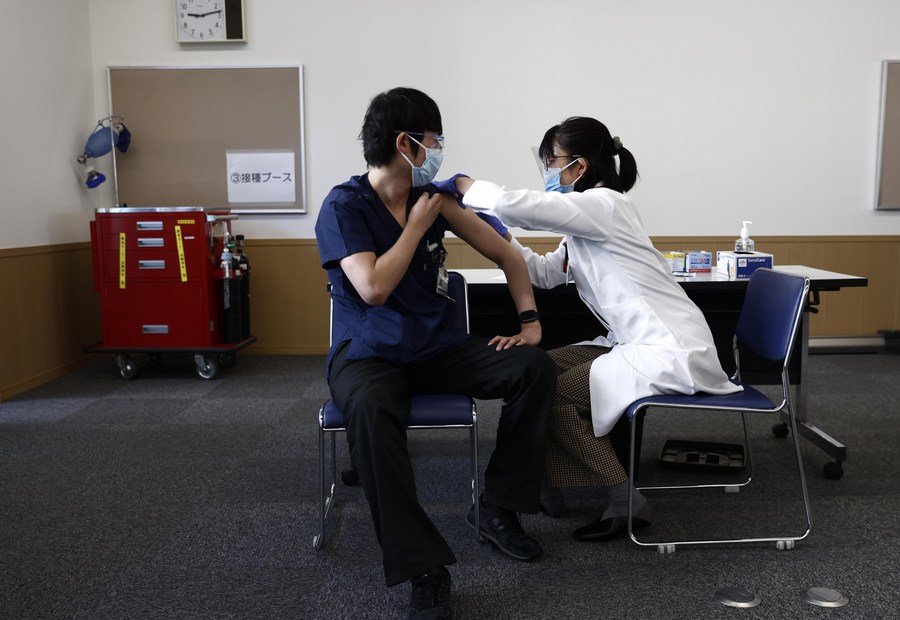 A medical worker receives a dose of COVID-19 vaccine as the country launches its inoculation campaign at Tokyo Medical Center in Tokyo, Japan, Feb. 17, 2021. (Behrouz Mehri/Pool via Xinhua)

Japan is not the only country struggling for a stable vaccine supply. In January, the EU said AstraZeneca's new schedule in which the British company's supply of COVID-19 vaccine would fall short of expectation was "not acceptable," and threatened to use legal actions to address the issue.

In the face of production shortfalls across the world, some rich countries are hoarding vaccines, leaving poorer ones defenseless in the face of the deadly pathogen. According to Duke University's Global Health Innovation Center, as of mid-January, high-income countries, which represent only 16 percent of the world's population, had taken 60 percent of available doses.

Vaccine nationalism and over-stocking of all sorts of necessary supplies to the disbenefit of others are among the clear weaknesses in how the international community has dealt with a range of important issues ever since the outbreak, said Anthony Zwi, a professor of global health and development at the University of New South Wales in Australia.

Some countries have demonstrated "a high degree of selfishness" in how they have used their power and resources, said Zwi, adding that pandemic control is a global public health issue that needs a shared responsibility and global cooperation at different levels and in different ways to achieve.

Junaid Iqbal, a 29-year-old young doctor, joined a field hospital last year in northern Pakistan's Gilgit to fight the pandemic, and his battle has lasted for almost one year.

"Never in my life had I wished to be vaccinated and immune from the virus like I did in the hardest of those days," Iqbal told Xinhua, recalling the time when his mother was infected with the virus at home, but he could not go back to look after her.

However, when he realized that rich countries had started rolling out vaccinations for their citizens, he became concerned that it would take a long time for him, a frontline health worker in a third-world country, to be vaccinated. 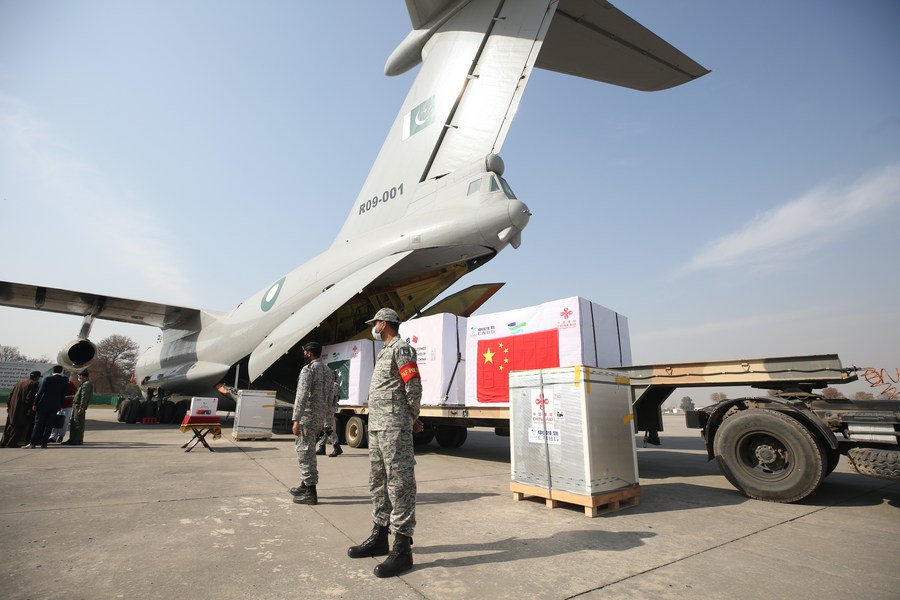 A handover ceremony of a batch of China-donated COVID-19 vaccine is held at Noor Khan Air Base near Islamabad, Pakistan, Feb. 1, 2021. (Xinhua/Liu Tian)

What concerns Iqbal has also worried Tedros, who noted in January that the comparison between administered doses in higher-income countries and one of the lowest-income countries had been 39 million versus 25. "Not 25 million, not 25,000, just 25," he said.

"It's very surprising. It's very unjust that Western countries are having piles of vaccine which they don't require," said Talat Shabbir, a senior researcher at the Institute of Strategic Studies Islamabad, Pakistan.

Experts said closing the immunity gap is not only about morality and conscience, but also the key to stopping the pandemic by cutting risk of more new variants.

"It's a moment of help, the moment that we need to help countries or those who cannot afford a vaccine. The COVID-19 vaccine has to be inclusive. It's just humanistic to have it inclusive," said Shabbir.

Margaret Chan, a former WHO chief, said COVID-19 vaccines are in short supply, but equitable vaccine distribution, especially to developing countries, is critical as the pandemic will not be controlled until it is controlled everywhere.

"In a globalized world, our vulnerability is universal and the international community must work together in solidarity in the face of a common health crisis," she said.

A batch of the Sinovac vaccines donated by China arrived in the Philippines on Sunday, the first COVID-19 vaccine to reach the Southeast Asian country. President Rodrigo Duterte went to the airport to welcome the arrival of the vaccines.

Duterte said receiving the vaccines from China made another step forward in the Philippines' ongoing fight against COVID-19. "I convey my sincere gratitude to the Chinese people and the government of China for this gesture of friendship and solidarity -- the hallmark of the Philippines-China partnership."

A day before, Malaysia also received its first delivery of China's Sinovac vaccine, days after the country kicked off its inoculation program, which aims to inoculate at least 80 percent of the country's total population. 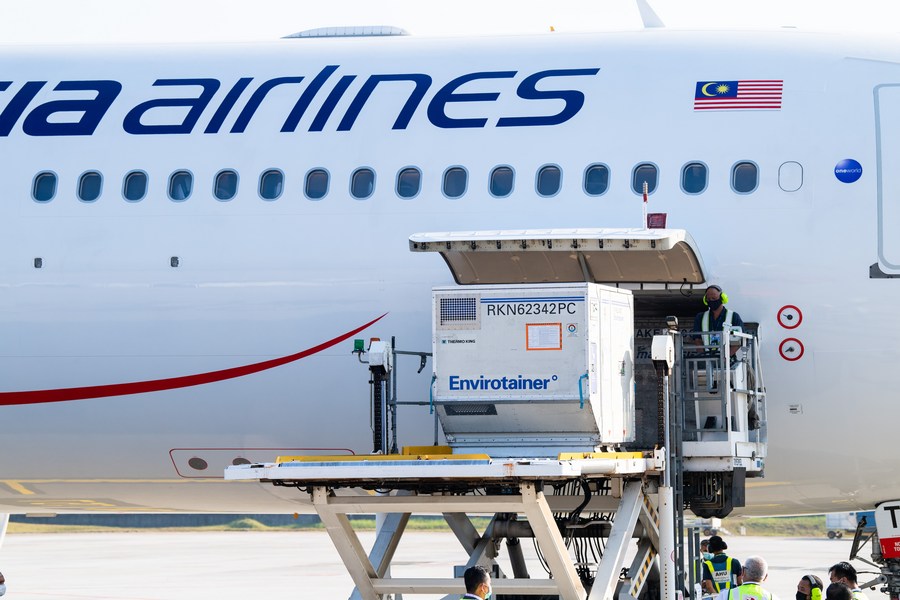 The first batch of COVID-19 vaccines made by the Chinese biopharmaceutical company Sinovac Biotech is unloaded upon its arrival at the Kuala Lumpur International Airport in Sepang, Malaysia, Feb. 27, 2021. (Xinhua/Zhu Wei)

Zulkarnain Md Eusope, managing director of Malaysia's leading pharmaceutical company Pharmaniaga which inked a deal in January with Sinovac for delivery of its inactivated vaccine to the country, called the arrival "a historic moment for Malaysia and an important milestone for the company's venture into vaccine manufacturing."

Last month, the Drug Regulatory Authority of Pakistan approved the single-dose vaccine developed by Chinese biopharmaceutical company CanSino Biologics for emergency use. The third phase trials of the vaccine were carried out in Pakistan, which offered a new experience to many Pakistani doctors, and helped the country work on its vaccine development.

In fact, Pakistan already approved China's Sinopharm COVID-19 vaccine for emergency use in January 2020 after evaluating its safety and quality. The country officially launched its vaccination drive on Feb. 3 after receiving China-donated COVID-19 vaccines.

In the spirit of "working together as one global family," China is actively cooperating with other countries to speed up vaccine development and production, so as to help relieve the global shortfalls of life-saving vaccines and address disparities in vaccine distribution.

Regarding vaccine cooperation with other countries, mostly with developing ones, China has demonstrated an approach that acts on human development and the vision of a community with a shared future for mankind, which is different from the zero-sum mentality of some countries, said Khalid Rehman, director-general of Islamabad-based think tank Institute of Policy Studies.