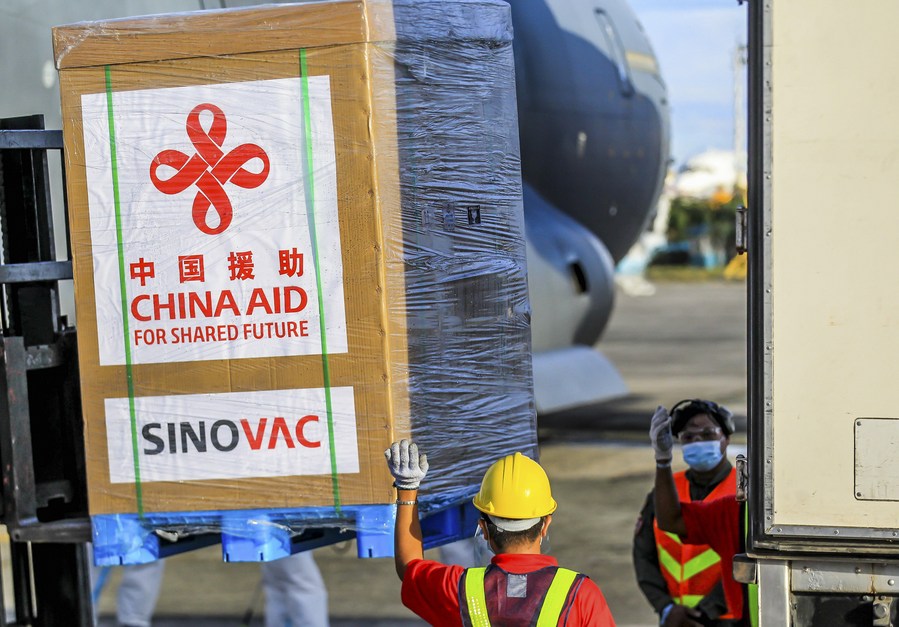 Staff members unload vaccines donated by China at a Philippine Air Force base in Manila, the Philippines, on Feb. 28, 2021. (Xinhua/Rouelle Umali)

BEIJING, March 2 (Xinhua) -- The ongoing pandemic coupled with profound changes unseen in a century have made world affairs even more complicated and unpredictable. But at least one thing is certain: As efforts to make the global economic development pie bigger are challenged, how to share the pie becomes even more important.

As the ancient Chinese say, it is not a matter of scarcity but of inequality. The lingering question of how to achieve more equal distribution continues to haunt the world.

The social justice issues arising from distribution and redistribution have ignited long-standing discontent in many countries, leading to the rise of populism. How to achieve more equal distribution of limited resources and push economic globalization towards an open, inclusive, balanced and mutually beneficial direction have become a common concern of humanity.

The question needs to be asked in terms of both economic development and the fight against the COVID-19 pandemic. To make the best possible use of vaccines, the production capacity of which is limited, there is a need to find optimal distribution solutions around the world, especially to ensure that they are equitably distributed between high-income countries and low- and middle-income countries. This is an ultimate test of values and courage as well as political wisdom.

Criticism has already been voiced. Some countries have been greedily hoarding vaccine pre-orders, reserving enough doses to vaccinate each of its nationals a few times over while turning a blind eye to the scarcity of vaccines for developing countries.

In the face of a global pandemic, no one can manage it alone. The optimal distribution of vaccines may determine how quickly and effectively humanity recovers from this unprecedented public health disaster.

In the last few years, China has made a superscale attempt to work around the issue of distribution. From the perspective of political economy, China's approach to eradicating extreme poverty and deploying limited resources in a way that "concentrates power to achieve great things" is essentially a form of optimal distribution.

In the case of poverty reduction, China has been devoted to finding the kind of cake dividing that best ensures a greater share for everyone. In some countries, the "trickle-down strategy" of sustained socio-economic development has failed to address the "last mile" of the fight against poverty. China has adopted a precise approach to poverty alleviation in the last phase of penury reduction, allocating its limited resources to areas of deep poverty and making the distribution more precise and effective with the help of infrastructure development, millions of poverty alleviation resident officials in the villages and big data.

China's poverty alleviation practices, to quote Friedrich Engels, explores the optimal mode of distribution "which allows all members of society to develop, maintain and exercise their capacities with maximum universality." China has actually made the poor not only the beneficiaries of distribution but also the contributors to growth. The Chinese way of distribution has activated the endogenous motivation of the impoverished and helped them to compete in the market.

China's practices and achievements in poverty reduction may inspire the world to look at issues such as social equality and vaccine distribution: How can we find the optimal distribution to make society more just?

Equitable COVID-19 vaccine distribution will lead to the biggest reduction in deaths. Mathematical modeling suggests that if wealthy countries stockpile COVID-19 vaccines, we will see nearly twice as many deaths as if vaccines were shared equally across the globe. This is not to say that all countries should make their altruistic choices, but perhaps prioritizing access to public goods for health care workers in developing countries who are in desperate need of vaccines could effectively prevent many deaths.

China has promised from the very beginning that the COVID-19 vaccines it developed will be made a global public good when they are available. A number of countries have already received Chinese vaccines. China has also officially joined the COVAX to actively promote the fair and effective distribution of the vaccine.

From poverty reduction to pandemic responses, China's quest for optimal distribution will be part of the world's relentless pursuit of better distribution in this era. ■