UN chief disappointed at outcome of pledging event for Yemen

UN chief disappointed at outcome of pledging event for Yemen 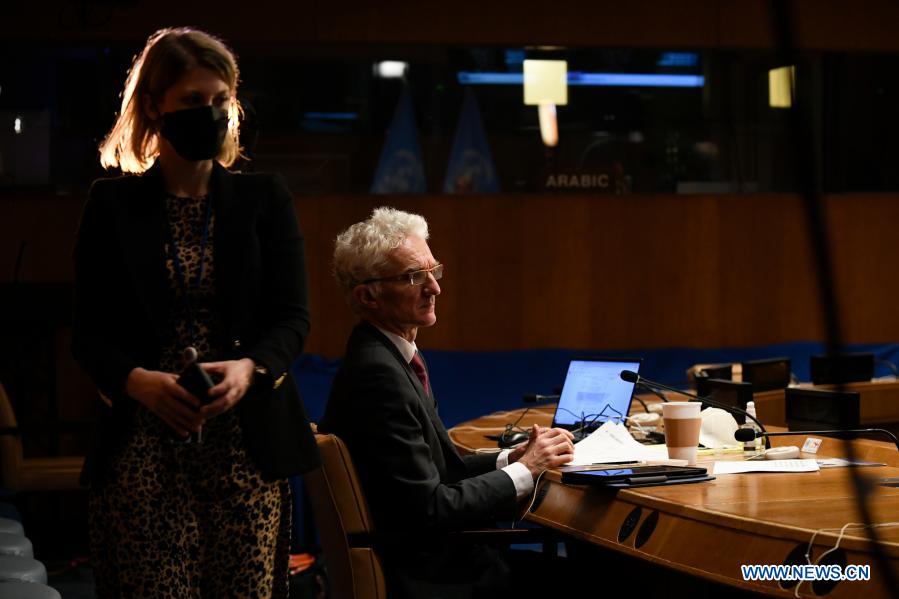 Mark Lowcock, the UN undersecretary-general for humanitarian affairs, takes part in the high-level pledging conference for Yemen at the UN headquarters in New York, March 1, 2021. UN Secretary-General Antonio Guterres said the outcome of Monday's high-level pledging conference for Yemen is disappointing. Pledges announced a total of about 1.7 billion U.S. dollars -- less than last year's pledges and 1 billion dollars less than what was pledged at the conference in 2019, said Guterres in a statement. (Evan Schneider/UN Photo/Handout via Xinhua)

Pledges announced a total of about 1.7 billion U.S. dollars -- less than last year's pledges and 1 billion dollars less than what was pledged at the conference in 2019, said Guterres in a statement.

"Millions of Yemeni children, women and men desperately need aid to live. Cutting aid is a death sentence," he said. "The best that can be said about today is that it represents a down payment. I thank those who did pledge generously, and I ask others to consider again what they can do to help stave off the worst famine the world has seen in decades."

At the pledging conference, Guterres asked for 3.85 billion dollars for humanitarian operations in Yemen for 2021.

World Food Programme Executive Director David Beasley said on Monday that 1.9 billion dollars is needed to prevent famine in Yemen. More money is needed for other forms of aid.

The United Nations will continue to stand in solidarity with the starving people of Yemen, said Guterres in the statement.

In the end, the only path to peace is through an immediate, nationwide cease-fire and a set of confidence-building measures, followed by an inclusive, Yemeni-led political process under UN auspices, and supported by the international community. There is no other solution, he said.

The exact amount of total pledges made on Monday was 1.67 billion U.S. dollars.

Mark Lowcock, the UN undersecretary-general for humanitarian affairs, who co-hosted Monday's pledging conference, warned that there will be a bigger famine in Yemen unless more funds are secured.

"This does not solve the problem. We are disappointed at the outcome. It's going to be impossible with such limited resources to prevent a large-scale famine," he told a virtual press briefing after the pledging conference. "So we're gonna have to come back to people and ask them for a stronger response, before too long."

Another pledging conference for Yemen may have to be convened in a few months to raise more money, he said.

"We will not abandon them (the Yemenis). We will continue to try and persuade the world to come to their aid. We will continue to do everything we can, through the work led by our Special Envoy (for Yemen) Martin Griffiths, to push for an end to the fighting and a cessation of hostilities and the beginning of a recovery effort for the people of Yemen, because that, ultimately, is the only way out of this mire."

He said the re-engagement of the new U.S. administration in the Yemen issue provides the best opportunity for progress in the country, both on peace and the humanitarian situation. Enditem