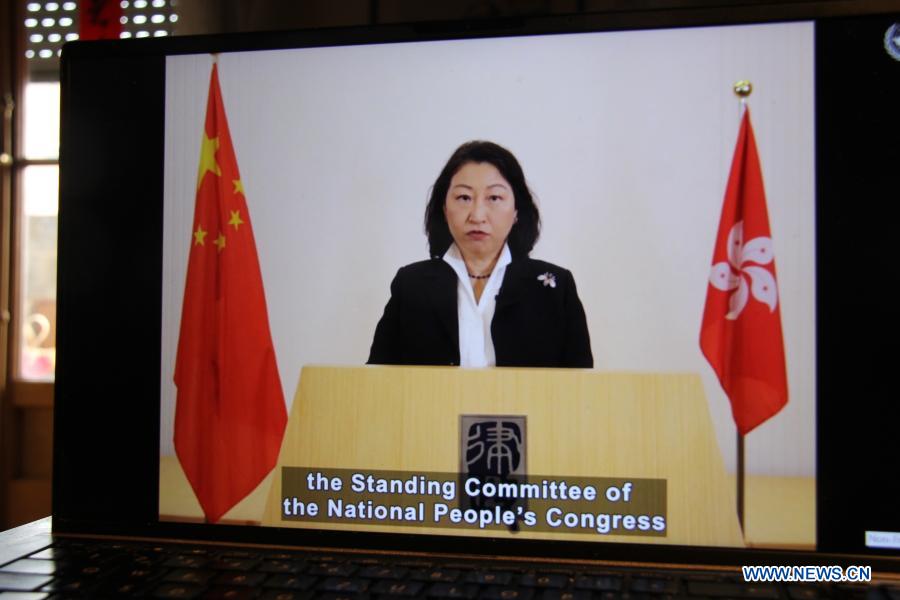 Screen shot taken in Geneva, Switzerland on Feb. 26, 2021 shows Teresa Cheng, deputy head of the Chinese delegation and secretary for justice of the Hong Kong Special Administrative Region government, addressing the 46th Session of the UN Human Rights Council. After the enactment of the Law of the People's Republic of China on Safeguarding National Security in the Hong Kong Special Administrative Region, Hong Kong's law and order is restored, and residents can resume their normal daily lives, Teresa Cheng said. (Xinhua/Nie Xiaoyang)

GENEVA, Feb. 26 (Xinhua) -- After the enactment of the Law of the People's Republic of China on Safeguarding National Security in the Hong Kong Special Administrative Region (HKSAR), Hong Kong's law and order is restored, and residents can resume their normal daily lives, a senior HK official told a UN rights body Wednesday.

Teresa Cheng, deputy head of the Chinese delegation and secretary for justice of the HKSAR government, said at the 46th Session of the UN Human Rights Council that Hong Kong has now reverted to a safe, rational, inclusive and vibrant society.

"In the second half of 2019, due to the civil unrest properties and facilities had been damaged, citizens arbitrarily attacked, the functioning of the legislature and government seriously disrupted, and many citizens and police officers were injured," she said.

"Like the national security laws of many countries, it makes secession, subversion, terrorist activity, and collusion with foreign forces to endanger national security a crime. The civil unrest has since subsided and the residents can enjoy their lawful rights and freedoms," she said.

The official told the UN rights body that Hong Kong people are now free to travel without fearing for their personal safety; vigilantism is no longer prevalent and people are free to express different views openly; and people are more respectful of the rights of others whilst exercising their own.

She stressed that the national security law expressly provides that human rights, such as freedom of speech and assembly, be protected, and legal principles such as presumption of innocence be respected and observed.

The law enforcement agencies and courts of HKSAR have been entrusted by China's central authorities to exercise jurisdiction over cases concerning national security offences. When adjudicating cases, the judges in Hong Kong remain independent and impartial in discharging their judicial duties, free from any interference, she said.

According to the official, the national security law has been effective in restoring law and order and safeguarding national security in Hong Kong, which has provided the necessary conditions for maintaining the long-term prosperity and stability of Hong Kong, and enables Hong Kong residents to enjoy their rights and freedoms in a safe and peaceful environment.

"The measures are conducive to the rule of law, the protection of human rights, and the successful implementation of the 'one country, two systems' policy. This is in the long-term interests of both the country and the two systems," she said. Enditem