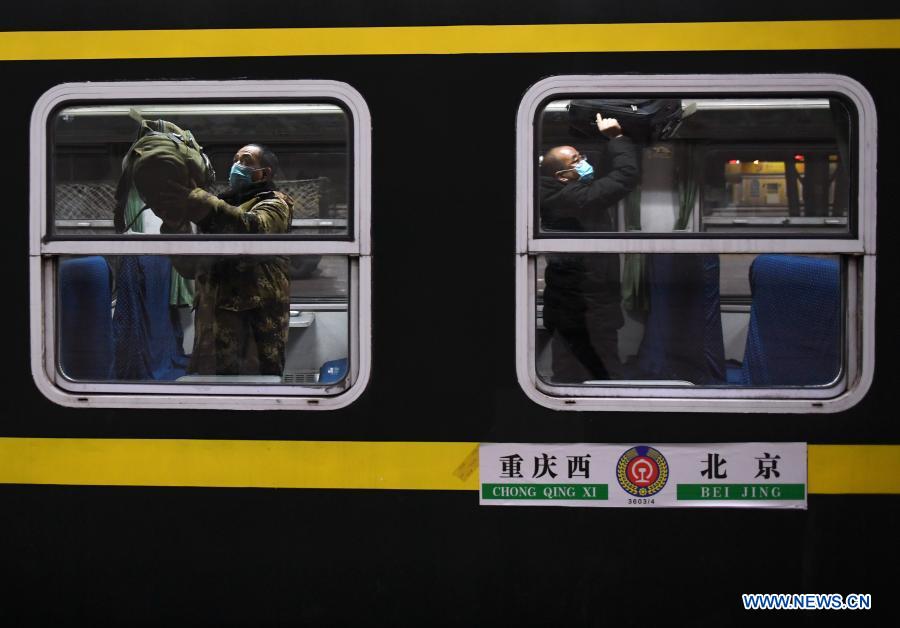 Passengers place their luggage on the overhead rack on the train 3603 from Beijing to Chongqing, in Beijing, capital of China, Jan. 28, 2021. The Spring Festival travel rush, known as the world's largest annual human migration, lasts 40 days from Jan. 28 to March 8 this year. (Xinhua/Zhang Chenlin)

BEIJING, Jan. 28 (Xinhua) -- The upcoming Spring Festival, also known as the Chinese Lunar New Year, is the most important festival for Chinese people and a significant occasion for family reunions. Yet with the start of this year's Spring Festival travel rush on Thursday, many are choosing to stay where they are.

It is their active response to the government's advice to stay put for the holiday and cancel "unnecessary" trips back home amid the winter COVID-19 resurgence. Such advice is not only a scientific decision, but also a rational policy-making move, on the grounds of epidemic prevention and control.

The advice sends a clear message that China aims to strike a balance between effective epidemic control and maintaining economic and social order. Although the country is likely to be the only major economy achieving positive growth in 2020, there is little room for a second hit. The potential damage to the economy could be even more disruptive, given that many sectors are still in the process of recovering, making them vulnerable to massive lockdowns or even just weakened confidence.

Striking such a balance entails effort, especially the cooperation and participation of the Chinese people. People are taking responsibility for their own health, and at the same time involving themselves in the nation's anti-epidemic fight. The Chinese practice of collectivism makes this strategy feasible, even in a country with a population of 1.4 billion.

The timely, non-mandatory call on Spring Festival travel has elicited a great many real-life actions, showing the mutual trust and tacit understanding between the government and the people.

The 40-day travel season, or "chunyun" in Chinese, is known as the world's largest annual human migration. Although down over 40 percent from the 2019 level, official data shows that China will likely see around 1.7 billion passenger trips during this year's chunyun, which lasts until March 8, up by more than 10 percent from 2020.

Reducing mass population mobility and gatherings proved to be one of the most effective ways to halt cross-infections and stop the virus from spreading.

China's "stay put, travel less" drive is endorsed by renowned experts. Zhang Boli, an expert in traditional Chinese medicine, suggested that people should maintain sharp vigilance on epidemic prevention and control, and avoid gatherings and unnecessary journeys during the holiday.

This year's "stay put" advice is accompanied by a differentiated strategy that applies different travel restrictions in areas with different risk levels. It gives people freedom of choice and respects their rights to go home for family reunions.

Many provincial-level regions across China have taken such steps so far, with both a firm determination to avert the risks of the virus spreading, and "soft, considerate and reassuring" measures. For example, those who choose to stay are expected to receive monetary incentives such as cash bonuses, free mobile data, shop vouchers, free movie tickets and free entry to tourist attractions.

Targeted measures have also been adopted to ensure the well-being of left-behind children and elderly people who will not be able to reunite with their families during the Spring Festival.

A few local governments that adopted a blunt, one-size-fits-all approach when implementing the "stay put" policy have drawn media criticism for the lack of capability and responsibility in their governance. The unreasonably restrictive measures, contrary to the requirements of the central government, are being corrected.

The protracted war against coronavirus is not just about what the government will do during one single travel-rush season. It is also about creating a people-centered society where every single life is safeguarded and every single person is respected. China is striving for this goal.

China has paid a heavy price for its hard-won, major strategic achievements in the battle against COVID-19, and it is facing arduous development goals and tasks in 2021, which is the first year of its 14th Five-Year Plan. At this crucial point, the country will make every endeavor to prevent the virus from a massive comeback. Enditem