-- Now that more than one in every 80 people worldwide have been infected with the coronavirus, the global community was knit together like never before with the same memory of pain and hope for normalcy.

-- There were a lot of botched responses to the virus, a virus whose origin and cure are unknown, for instance, the erroneous idea of injecting disinfectant as possible treatment, controversy over the concept of herd immunity, and hijacking of other countries' medical materials.

-- In fortifying a defense line involving all humans, rich and poor, there is a role for China. Considered safe, effective, and easy to store, vaccines from Chinese producers have been approved in such countries as Brazil, Chile, Turkey, Egypt, Iraq, Indonesia, Pakistan and Serbia.

-- As of January, China has provided assistance for over 150 countries, sent medical teams to those in need, offered funding to relevant United Nations agencies including the WHO, and provided countries around the world with over 220 billion masks, 2.25 billion protective suits and over 1 billion testing kits.

NEW YORK, Jan. 26 (Xinhua) -- Global COVID-19 cases hurtled to 100 million on Tuesday, breaking yet another grim record, according to the Center for Systems Science and Engineering at Johns Hopkins University.

Throughout a roller-coaster year featuring a pandemic, when waves of the virus and its faster-spreading variants are ravaging the world, however, human efforts to defeat the disease at times and in some places lagged or went wrong, like belated test results, public defiance of necessary restrictions and, more recently, unbalanced vaccine distribution.

In this life-or-death race of mankind versus virus, COVID-19 caught everyone off guard at first. However, anti-virus measures like lockdowns and calls for wearing a mask have gained increasing popularity, with the faster-than-ever work on vaccines expected to usher in an end to the pandemic.

Now that more than one in every 80 people worldwide have been infected with the coronavirus, the global community was knit together like never before with the same memory of pain and hope for normalcy. Humans have gone to great lengths to outrun the virus, and against all odds in the future, there is this overwhelming strength of a global community hand in hand. 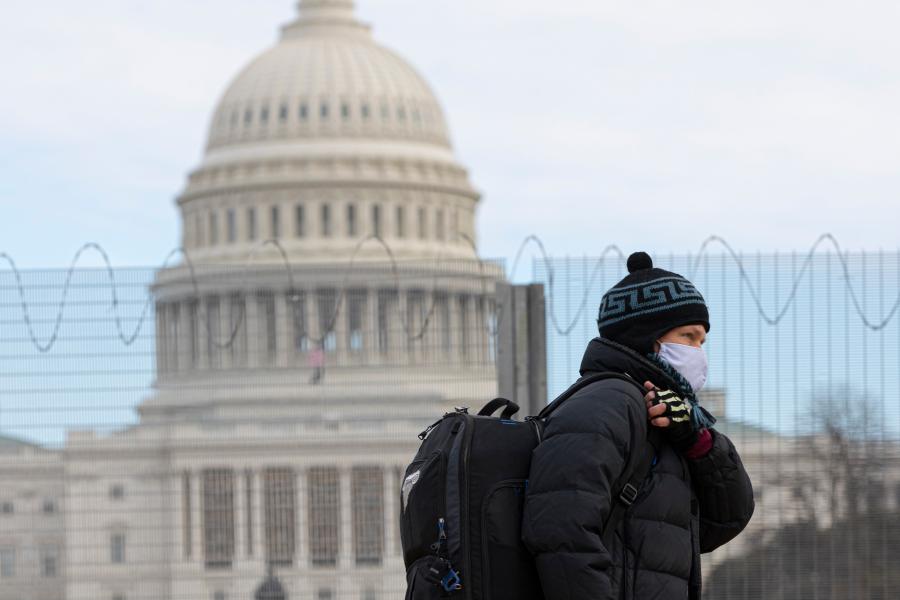 A man wearing a face mask walks past the U.S. Capitol building in Washington, D.C., the United States, Jan. 24, 2021.(Photo by Aaron Schwartz/Xinhua)

After its outbreak, the COVID-19 pandemic has seen an upward spiral. It took months for global infections to cross the ten million mark since the very first reported case, but only about two weeks to add yet another ten million from 90 million.

So far the outlook is still not rosy. A faster-spreading coronavirus variant first reported in Britain has been detected in at least 60 countries, said the World Health Organization (WHO) on Jan. 20.

Some countries have set record after record for daily increases. With over 100,000 new cases every day for weeks, the United States has set a yet unbeaten, painful global record. Understaffed hospitals have struggled with a dearth of beds. Deaths also rose, so fast that a county in Texas, for example, used temporary coolers to hold bodies. 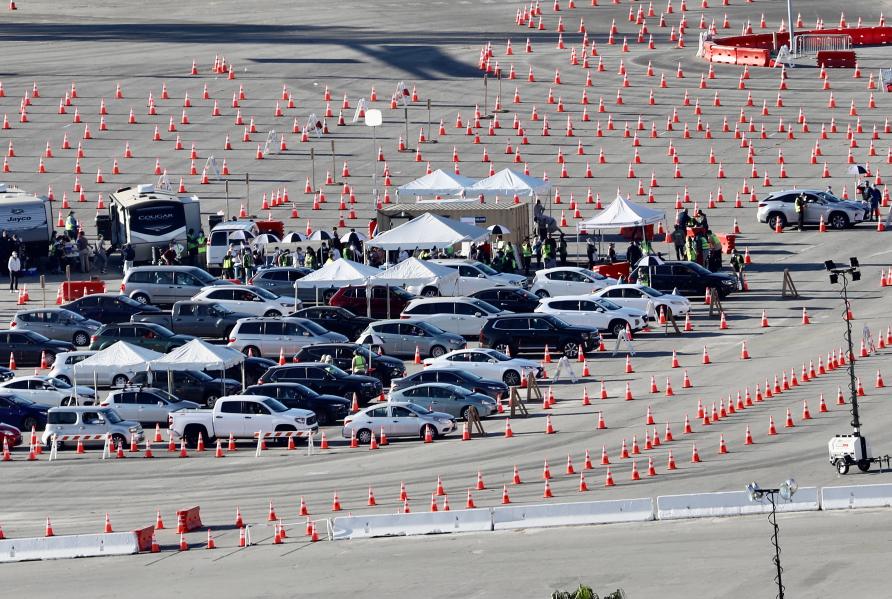 Motorists line up to receive inoculation at a COVID-19 vaccination site at Dodger Stadium in Los Angeles, California, the United States, Jan. 15, 2021.(Xinhua)

Other parts of the world have not fared much better. Take Japan for example: Its medical system was so overwhelmed that some hospitals had to turn away patients.

Yet outside hospitals, the pandemic is causing larger-scale damage as it sent the economy into free fall. Amid lockdowns, countless businesses across the globe have filed for bankruptcy, leaving laid-off workers in the lurch. In a January report released by the World Bank, global economic output is expected to expand 4 percent in 2021 but still remain more than 5 percent below pre-pandemic projections.

There were a lot of botched responses to the virus, a virus whose origin and cure are unknown, for instance, the erroneous idea of injecting disinfectant as possible treatment, controversy over the concept of herd immunity, and hijacking of other countries' medical materials. Today humanity is better equipped with more knowledge and consensus. 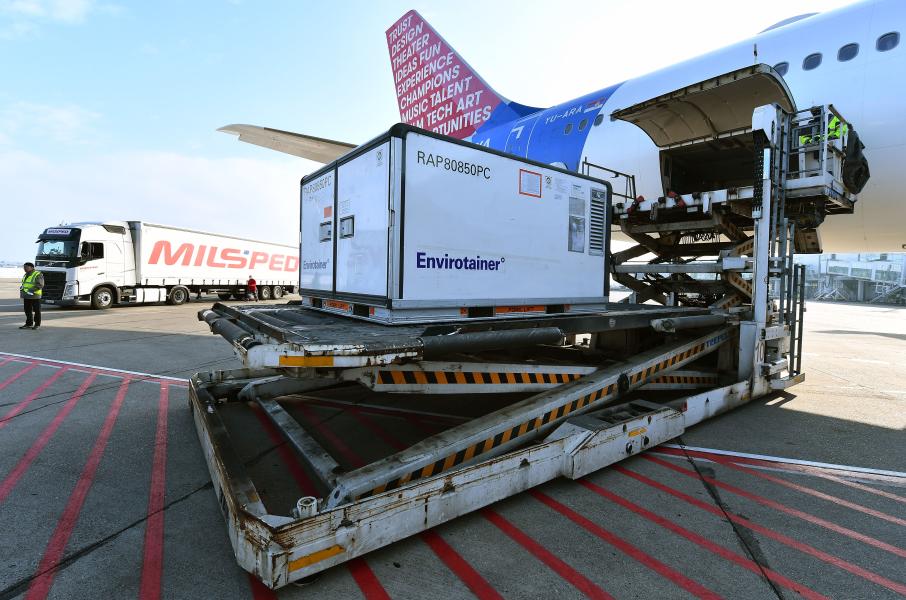 In Europe, which was hit by a deadlier second wave of COVID-19, many countries have started the new year with lockdowns or earlier curfews. Sweden tightened its social distancing rules, and Britain has imposed several rounds of national lockdowns. In a rapid response to the more contagious variant, dozens of countries have announced bans or restrictions on travel from Britain.

When COVID-19 started to sweep China during its traditional New Year festival marked by enormous population flows, a tight system for virus control involving all sectors of society was swiftly in place, featuring early intervention to break chains of transmission, a well-guarded community-based line of defense, etc.

Now, China has long got the virus under control and become the first major economy to return to growth, a testament to the effectiveness of its anti-pandemic measures, like mandatory mask-wearing policy, use of health QR codes with authorization from the public, and strict quarantine rules.

"This pandemic has shown that China has done wonderful work for the world to follow as an example," said Ejaz Ahmad Khan, a specialist in infectious diseases at Islamabad-based Shifa International Hospital. "Even after one year, China is still on alert. And that's why we see very few cases while the world is struggling to go through the pandemic right now." 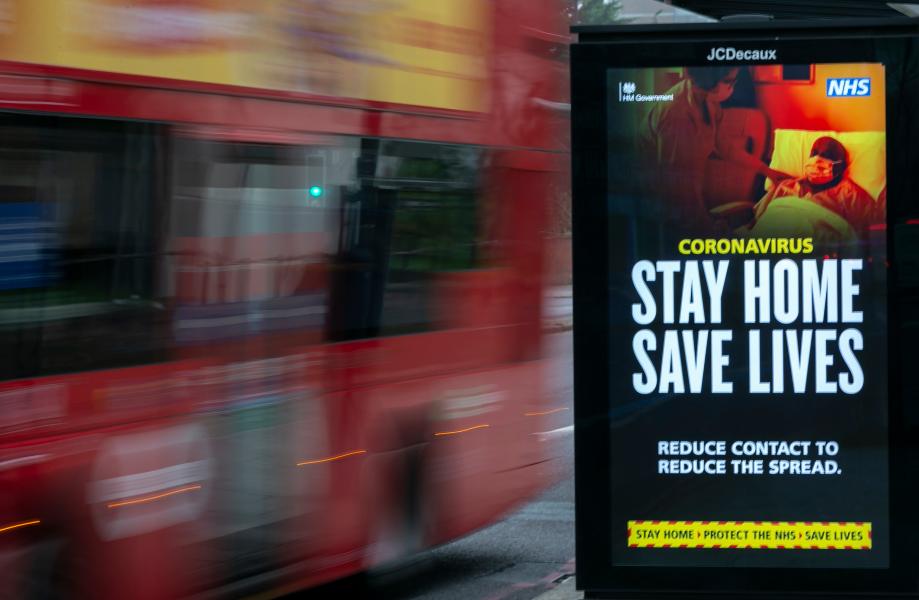 A bus runs past an advertising board reading "Stay Home Save Lives" in London, Britain, Jan. 10, 2021.

COVID-19 vaccination is now underway in more than 50 countries, WHO Director-General Tedros Adhanom Ghebreyesus said on Jan. 21, calling it "a stunning scientific achievement and a much-needed source of hope" for safe and effective vaccines to be developed and approved in less than one year.

In pooling talents and funds, humans are winning in the race against a novel coronavirus. To dispel doubts and assure the public of vaccine safety, leaders and high-level officials in countries like Indonesia and Turkey took a dose live on TV before mass roll-outs.

Despite the good news, vaccine distribution came as a drag. In the United States, though the country was among the first to develop and approve COVID-19 vaccines, Americans got poised to roll up their sleeves for a shot only to find a lack of organization, like queue-jumping and deliberate waste of doses in some states.

"Operation Warp Speed has failed to come anywhere close to its original goal of vaccinating 20 million people against the coronavirus by the end of 2020," said a New York Times editorial. "That's an astonishing failure." 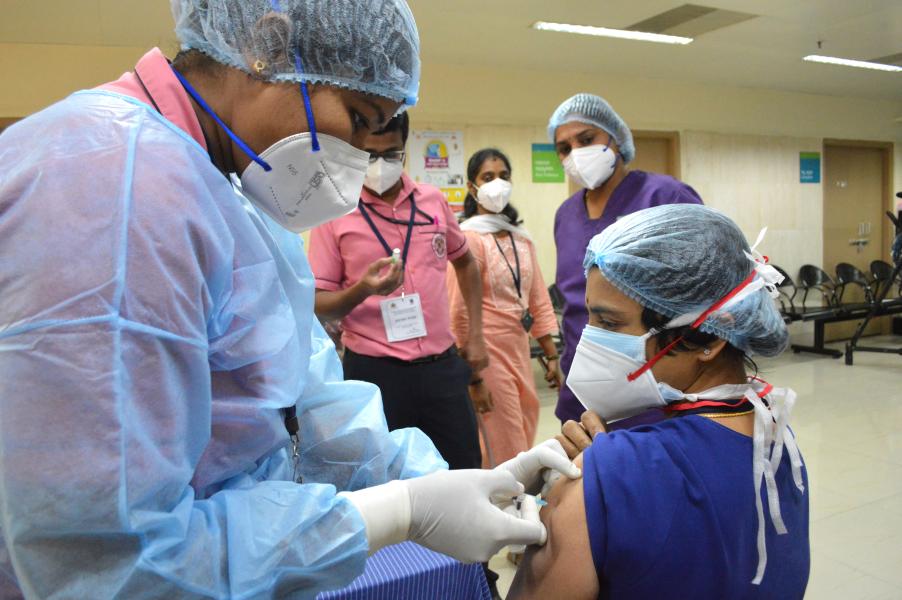 Outside the developed part of the world, the imbalance in distribution loomed large. While more than 39 million doses of vaccine have now been administered in at least 49 higher-income countries, just 25 doses have been given in one lowest-income country, Tedros said on Jan. 18, warning of "a catastrophic moral failure."

A week later, Tedros, citing two new studies, added that it would also be an economic failure if the world doesn't deliver equitable access to vaccines. "Vaccine nationalism might serve short-term political goals," he said at a media briefing. "But it's in every nation's own medium and long-term economic interest to support vaccine equity."

Hope is on the horizon. A global plan named COVAX has been launched to provide innovative and equitable access to COVID-19 diagnostics, treatments and vaccines. After mistakes made during the HIV and H1N1 pandemics, Tedros said, "We have an opportunity to beat history." 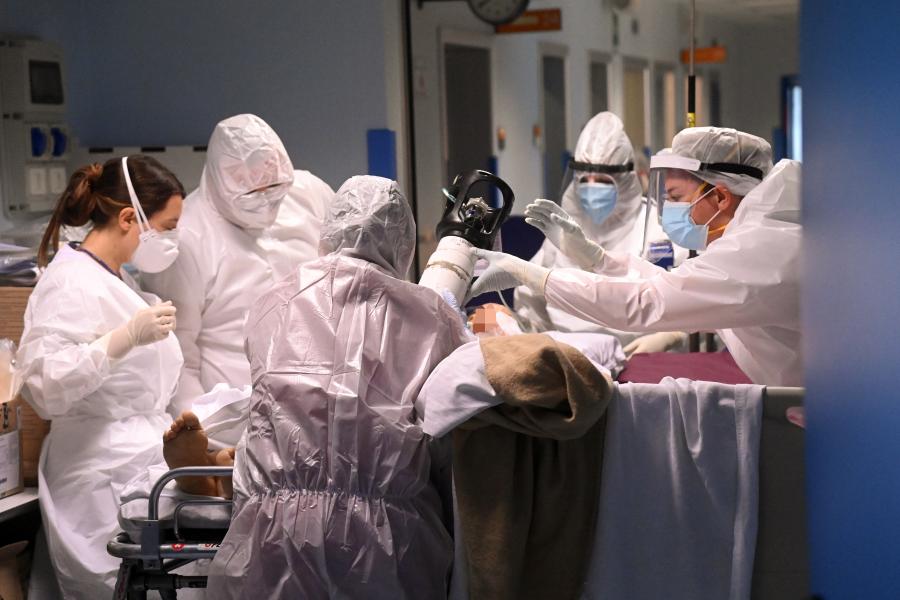 Medical members work at a COVID-19 unit of the Sant'Orsola-Malpighi Hospital in Bologna, Italy, Nov. 12, 2020.

In fortifying a defense line involving all humans, rich and poor, there is a role for China. Considered safe, effective, and easy to store, vaccines from Chinese producers have been approved in such countries as Brazil, Chile, Turkey, Egypt, Iraq, Indonesia, Pakistan and Serbia.

Expectations have run high. When a million doses of China's Sinopharm coronavirus vaccines arrived at the Belgrade Airport in mid-January, Serbian President Aleksandar Vucic was there to welcome the shipment. "As an ordinary person and the president of Serbia, I am convinced of the quality of the Chinese vaccine," he said.

"Vaccinating only a sector of the world population will not be the solution, since the world is in constant motion," Rafael Vilasanjuan, a department director at the Barcelona Institute for Global Health, recently told Xinhua, "so it is essential to understand that if the problem is global, then so is the solution." 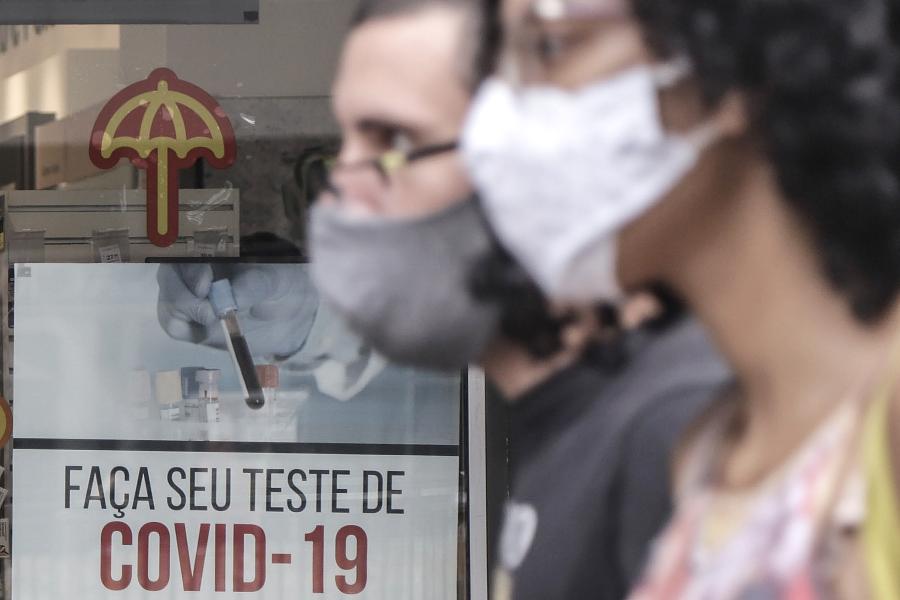 Now that COVID-19 is reaching one grim milestone after another, questions about its end are becoming more pressing. There is no easy answer, but history can serve as a reminder. In a decades-long relay race of scientists, doctors and governments, for example, an increasing number of diseases once considered incurable, like diabetes, cancer and AIDS, have somewhat come under control through new medicines.

Time after time, humans united as one gained an edge over common enemies and bailed the whole community out. From the ashes of World War II, the United Nations arose with consensus about peace and multilateralism. From the 2004 tsunami across the Indian Ocean to the 2010 Haiti earthquake, an array of international teams always came to the rescue. What's more, terrorism was put under a tight siege by a global military alliance.

This pandemic is no exception. "This is a wake-up call," Michael Ryan, executive director of the WHO's Health Emergencies Program, said in December. "If there's one thing we need to take from this pandemic, with all of the tragedy and loss, (it) is that we need to get our act together." 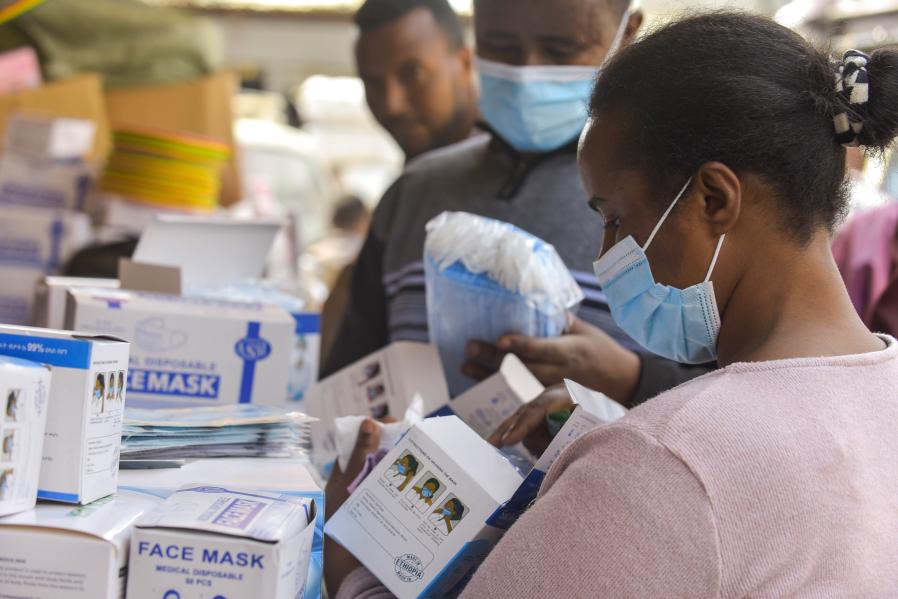 Throughout the turbulence, mutual aid came flowing in. As early as January 2020, China submitted to the WHO and shared globally the virus's genome sequence, a boon for research into the disease and its vaccines. When July just started, WHO Chief Scientist Soumya Swaminathan said there were already over 60,000 sequences shared.

"I think this is probably the first time that we've seen almost all countries willing to share the genetic sequence data of this virus in a public database through GISAID, through GENBANK," she said.

By noon on Feb. 5, 2020, China, then the epicenter of COVID-19, had received prevention and control supplies from 21 countries. Afterwards the virus hit the whole world, and China returned the favor. Italy sent 40,000 masks to China as soon as the health crisis broke out in Wuhan. Later China donated millions of masks back when COVID-19 raged in Italy. 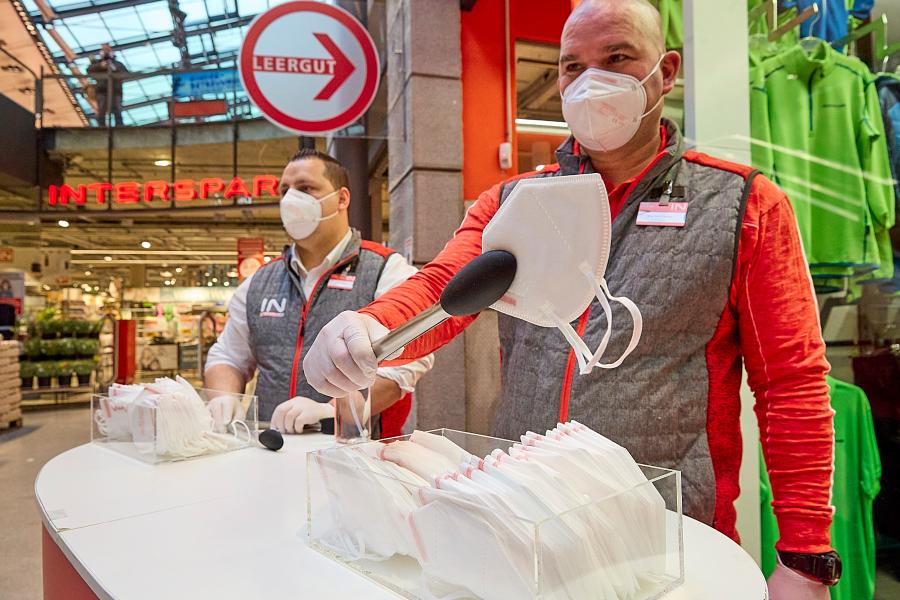 Staff members of a supermarket hand out face masks to customers in Vienna, Austria, Jan. 25, 2021. (Photo by Georges Schneider/Xinhua)

As of January, China has provided assistance for over 150 countries, sent medical teams to those in need, offered funding to relevant United Nations agencies including the WHO, and provided countries around the world with over 220 billion masks, 2.25 billion protective suits and over 1 billion testing kits.

"Remember," Tedros said on Jan. 8 during a COVID-19 virtual press conference, "ending this pandemic is one of humanity's great races and whether we like it or not, we will win or lose this race together."