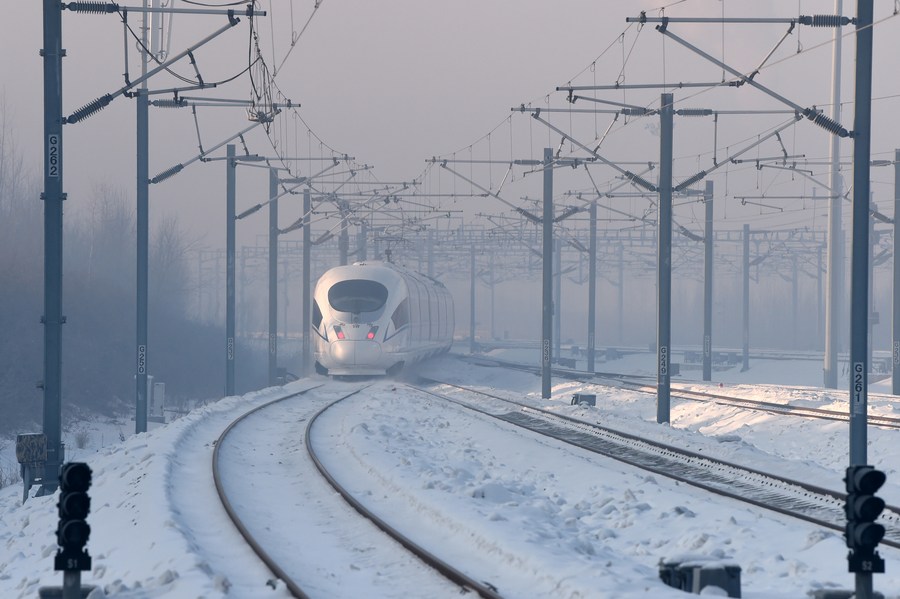 A high-speed train pulls out of the Harbin West Station, which is along the railway linking Beijing and Harbin, capital city of northeastern province of Heilongjiang, Jan.22, 2021. (Xinhua/Wang Jianwei)

The new railway service forges a closer link between the national capital and the northeastern provinces of Liaoning, Jilin, and Heilongjiang.

With a designed speed of 350 km per hour, the service is expected to shorten the travel time from Beijing to Harbin to about five hours, around one and a half hours less than the previous fastest railway route.

The first section of the route, extending from Shenyang, capital of Liaoning Province, to Harbin, was put into operation in 2012. The section from Shenyang to Chengde began service in 2018.

Three sets of Fuxing bullet trains that can operate under temperatures as low as minus 40 degrees have been put into operation for the first time on the railway.

The route is an important part of China's high-speed railway network, which completes the high-speed railway link between the southern and northern regions of the country, said Fan Yijiang, an expert with the National Development and Reform Commission.

"It will facilitate travel between the country's northeastern parts and the Beijing-Tianjin-Hebei region and can add values to areas along the route," Fan said.