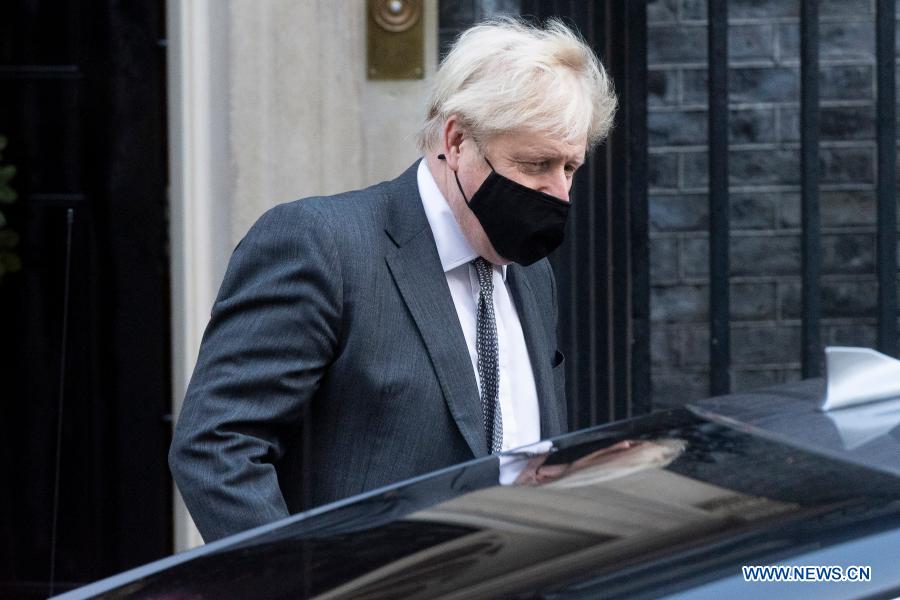 British Prime Minister Boris Johnson leaves 10 Downing Street for the House of Commons in London, Britain, on Dec. 30, 2020. British lawmakers on Wednesday approved the post-Brexit trade deal between Britain and the European Union (EU) by a large majority, paving the way for an orderly Brexit when the transition period ends on Thursday. (Photo by Ray Tang/Xinhua)

LONDON, Dec. 30 (Xinhua) -- British lawmakers on Wednesday approved the post-Brexit trade deal between Britain and the European Union (EU) by a large majority, paving the way for an orderly Brexit when the transition period ends on Thursday.

They voted 521-73 to back the trade deal in the House of Commons (lower house of the British Parliament) at its first stage after only five hours of debate on Wednesday.

The British parliament was recalled on Wednesday morning to put the agreement into British law, one day before Britain stops following EU rule.

The EU (Future Relationship) Bill will then pass to the House of Lords (upper house of the British parliament) for their approval, and is expected to pass through all of its required parliamentary stages in a single day on Wednesday.

Britain's Queen Elizabeth II is expected to give Royal Assent later Wednesday as soon as the bill has cleared its journey in the parliament.

British Prime Minister Boris Johnson was given a major boost for the pass of the bill as the main opposition Labour Party announced to support the deal.

Although Britain ended its membership of the EU on Jan. 31, 2020, it has followed EU rules during a transition period which expires at 2300 GMT on Thursday. Without this new bill, Britain would enter 2021 with no trade deal with the EU.

Opening the debate in the House of Commons, Johnson told MPs: "We now seize the moment to forge a fantastic new relationship with our European neighbors, based on free trade and friendly cooperation."

"In less than 48 hours, we will leave the EU single market and the customs union, as we promised and yet British exporters will not face a sudden thicket of trade barriers, but rather, for the first time in the history of EU agreements, zero tariffs and zero quotas," said Johnson.

"The central purpose of this bill is to accomplish something that the British people always knew in their hearts could be done, but which we were continually told was impossible," he said.

Earlier on Wednesday, European Council President Charles Michel and President of the European Commission Ursula von der Leyen both formally signed the trade agreement in Brussels on behalf of the EU.

The signing ceremony was held after the provisional application of the agreement as of Jan. 1, 2021 was approved by the EU member states on Tuesday. The trade deal will need to be scrutinized by the European Parliament early next year before it is formally ratified by the EU Council.

Following the brief ceremony in Brussels, the documents were then flown to London by the RAF for Johnson to put his name to.

The EU and Britain announced last Thursday that they had reached an agreement that will govern bilateral trade and security.

The deal, which came after nine months of arduous negotiations between Britain and the EU, is the biggest bilateral trade deal signed by either side, covering trade worth around 668 billion pounds (about 905.4 billion U.S. dollars).