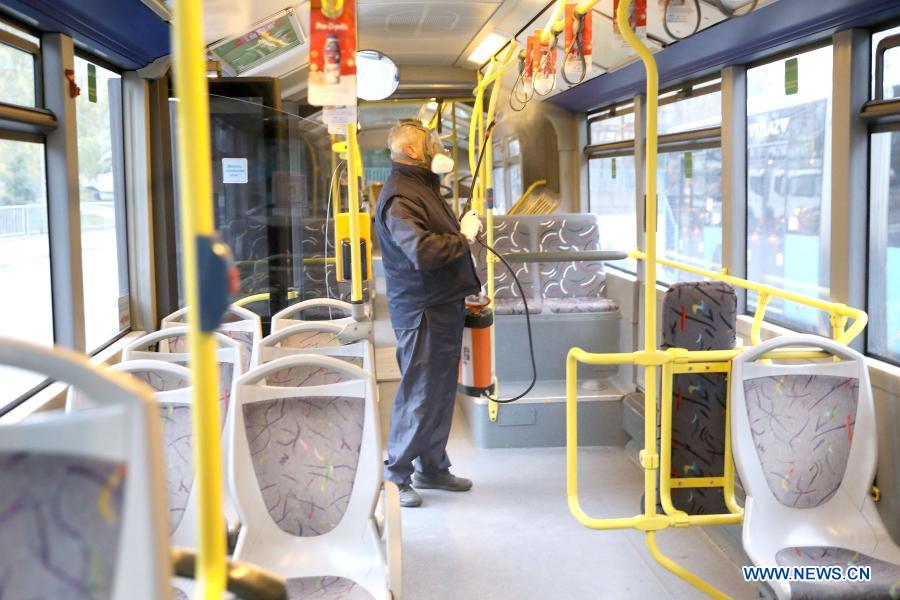 A worker disinfects a bus in Zagreb, Croatia, Nov. 26, 2020. Croatian Prime Minister Andrej Plenkovic on Thursday announced strict new measures to combat the COVID-19 pandemic, as a record high of 4,009 new cases and 51 deaths were recorded in the past 24 hours. (Patrik Macek/Pixsell via Xinhua)

ZAGREB, Nov. 26 (Xinhua) -- Croatian Prime Minister Andrej Plenkovic on Thursday announced strict new measures to combat the COVID-19 pandemic, as a record high of 4,009 new cases and 51 deaths were recorded in the past 24 hours.

The new measures which will be effective on Saturday and last at least until Dec. 21 include the closure of cafes, bars, and restaurants. Schools will remain open until further notice.

Plenkovic explained that the government had to introduce new restrictions because earlier measures had not stopped the surge in coronavirus cases.

"The key is our behavior. Even if a small number of people do not adhere to the measures, the infection will continue to spread, so even these measures will not be enough," Plenkovic told a press conference after a cabinet meeting, urging people to act responsibly and avoid any unnecessary physical contact.

"Complete lockdown is not realistic, neither economically nor politically," Plenkovic noted.

Churches, stores, and cultural and entertainment institutions can continue operating with special restrictions. All public gatherings of over 25 people are banned while private celebrations can be organized for 10 people at most. To prevent party at home, the government also banned the sale of alcohol after 10 p.m.

Public transport travel will be limited as much as possible. Employers are encouraged to introduce working from home, where it is possible, or organize working shifts.

Since Feb. 25, when the first case was reported in the southeastern European country with a population of 4 million, 115,626 people have been infected, of whom 1,552 have died, according to Croatian Institute of Public Health.

As the world is struggling to contain the pandemic, countries include Germany, China, Russia, the United Kingdom and the United States are racing to find a vaccine. Croatia has ordered COVID-19 vaccines from several companies via the European Union, and their delivery can be expected in the country as soon as they are registered, Plenkovic said earlier this month.