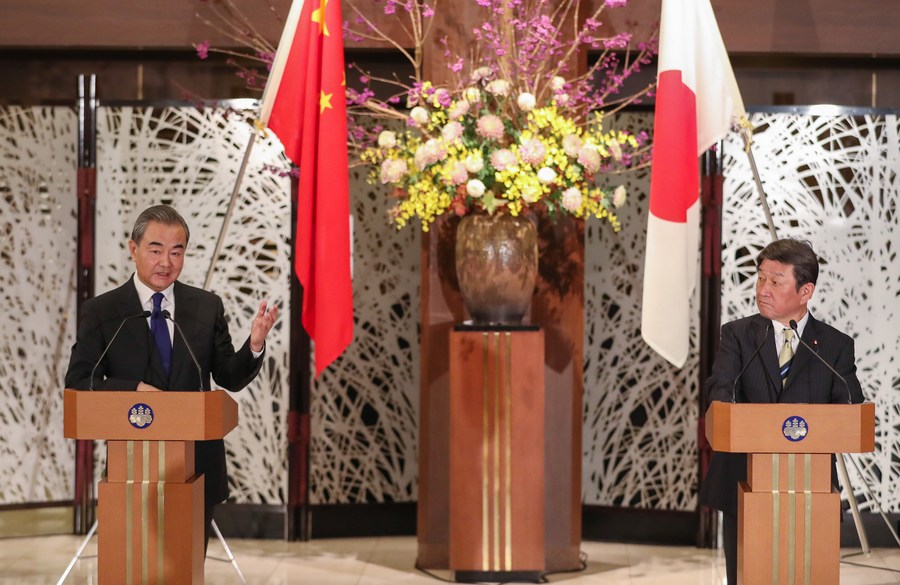 The meeting with Motegi was the first face-to-face contact between the two foreign ministers since the outbreak of the COVID-19 pandemic, said Wang, adding that they had candid and in-depth discussions on bilateral relations as well as international and regional issues of common interest, and reached a wide range of important consensuses.

Six decisions were also made between the two sides, according to Wang.

As the COVID-19 pandemic is still raging across the globe, the human community shares weal and woe, and the interests and security of all countries are closely linked, Wang said at a joint press conference with Japanese Foreign Minister Toshimitsu Motegi following their meeting.

Both China and Japan, as important countries in the region and the world, as well as cooperation partners of strategic and mutual benefit, bear the responsibility to strengthen solidarity and coordination to jointly tackle the challenges, he added.

His meeting with Motegi was the first face-to-face contact between the two foreign ministers since the outbreak of the pandemic, said Wang, adding that they had candid and in-depth discussions on bilateral relations as well as international and regional issues of common interest, and reached a wide range of important consensuses.

Both countries agreed that under the strategic guidance of the two leaders and based on the four political documents between the two countries, China and Japan should enhance mutual trust and engage in positive interactions so as to build bilateral relations that meet the requirements of the new era, said Wang.

Both sides agreed to continue to jointly fight the coronavirus pandemic, exchange information in a timely manner, carry out medical and drug cooperation, safeguard the health of the two peoples and make joint contributions to regional and international public health cooperation, he added. 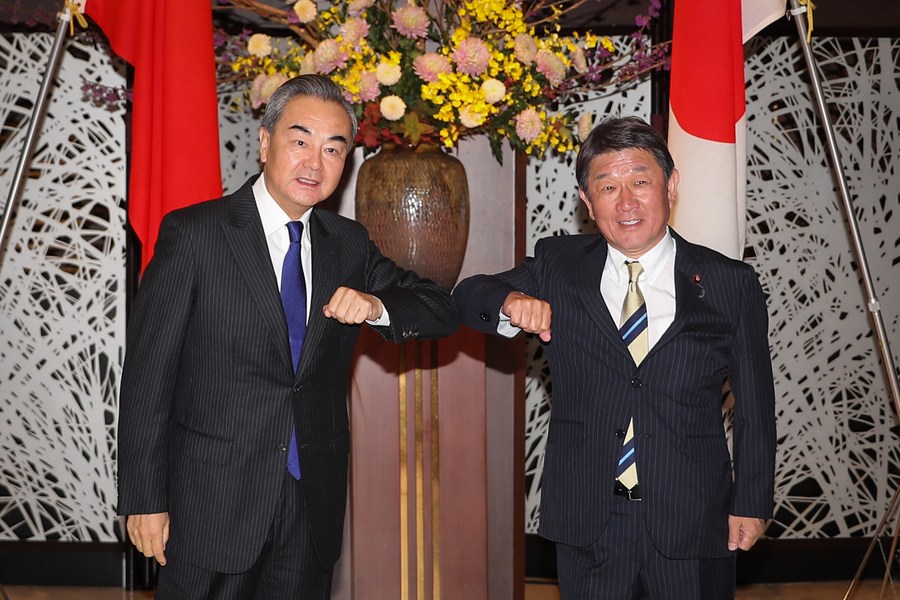 Both countries agreed to work together to promote economic recovery, hold a new round of high-level economic dialogue at an appropriate time next year, and continue to strengthen cooperation in key areas such as scientific and technological innovation, energy conservation and environmental protection, medical care and health care, e-commerce and third-party markets, said Wang.

Both sides agreed to make efforts for the early enforcement of the Regional Comprehensive Economic Partnership (RCEP), accelerate negotiations on the China-Japan-South Korea free trade area and the regional cooperation, and jointly uphold and strengthen the rules-based multilateral trading system, he added.

Both countries also agreed to support each other in hosting the Tokyo Olympic Games and the Beijing Winter Olympics and make these two major sports events a success.

Meanwhile, the two sides will hold a meeting of the high-level consultation mechanism on people-to-people exchanges at an appropriate time, fully resume bilateral personnel exchanges when the pandemic is over, expand regional exchanges and cooperation, enhance mutual understanding and friendship between the two peoples, and improve the public opinion environment for bilateral relations, said Wang.

Several decisions were also made between the two sides, according to Wang. First, the "fast track" for necessary personnel exchanges between the two countries will be launched within this month to further promote the resumption of work and production cooperation.

Second, the two countries will establish an inter-departmental consultation mechanism on cooperation in food, agricultural products and aquatic products, and speed up communication and coordination in the sector.

Fourth, the two countries will launch preparations for the commemoration of the 50th anniversary of the normalization of China-Japan diplomatic ties in 2022, and consider postponing the China-Japan Cultural and Sports Exchange Promotion Year to next year and 2022.

Fifth, the two countries will hold a new round of high-level consultation on maritime affairs next month to strengthen communication and exchanges between the foreign affairs departments and maritime law enforcement agencies of the two countries.

Sixth, the two countries will strive to launch the direct line under the maritime and air contact mechanism between their defense departments within this year so as to strengthen risk management and control and enhance security mutual trust.

Wang said that under the new circumstances, China is ready to work with Japan to shoulder responsibilities and promote cooperation with a broader vision, more effective actions and in a wider range of fields, to bring more benefits to the two peoples as well as the international community.

Wang arrived here earlier on Tuesday for a visit. ■