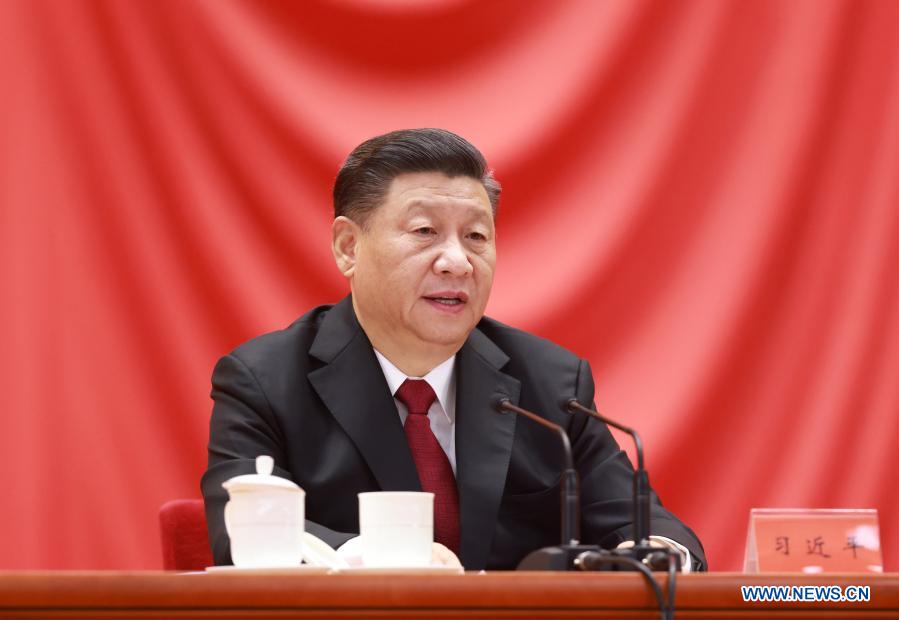 Chinese President Xi Jinping, also general secretary of the Communist Party of China (CPC) Central Committee and chairman of the Central Military Commission, delivers a speech at a gathering to honor model workers and exemplary individuals at the Great Hall of the People in Beijing, capital of China, Nov. 24, 2020. (Xinhua/Ding Lin)

Xi, also general secretary of the Communist Party of China (CPC) Central Committee and chairman of the Central Military Commission, made the remarks at a gathering to honor model workers and exemplary individuals, stressing that China must closely rely on the working class to promote high-quality development.

On behalf of the CPC Central Committee and the State Council, Xi congratulated the awardees and greeted China's working class and working people who have made outstanding contributions to the country's reform and opening up and socialist modernization.

Model workers are elites of the Chinese nation, role models for the people and heroes of the republic, Xi said, noting that the Party and the state have always attached great importance to giving play to the important roles of model workers and exemplary individuals.

The meeting was presided over by Li Keqiang. Li Zhanshu, Wang Yang, Zhao Leji and Han Zheng also attended, while Wang Huning read the decision on the commendation at the meeting.

A total of 1,689 people were honored as national role model workers and 804 as exemplary individuals.

The working class and working people have been the main force to secure a decisive victory in building a moderately prosperous society in all respects and winning the battle against poverty, Xi said.

Xi called for efforts to promote and encourage the spirit of model workers, the value of work, and the pursuit of fine workmanship.

Working is the source of all happiness, said Xi, calling for promoting the social norm of honoring work and fostering high-caliber workers.

Xi ordered giving full play to the role of the working class as the main force upholding and developing socialism with Chinese characteristics.

He demanded that the working class and working people always follow the Party and make achievements in the new era.

Xi called for training a high-caliber work-force, and encouraged the working class to keep improving their skills in order to adapt themselves to the latest sci-tech revolution and industrial transformation.

Industrial workers should be trained to have firm ideals, good skills, innovation ability, and a sense of responsibility and dedication, Xi said.

Xi underscored efforts to realize, protect and develop the legitimate rights and interests of workers, and enable the working class and working people to have a stronger sense of fulfillment, happiness and security.

Greater prominence must be given to stabilizing jobs, Xi noted, calling for continuously increasing workers' income and building a multi-tiered social security system for them.

As this year marks the 95th anniversary of the All-China Federation of Trade Unions, Xi asked the trade unions to draw upon their success and experience over the past 95 years and strive to do even better work.

While presiding over the meeting, Li Keqiang urged earnest study and full implementation of Xi's speech, and called for efforts to rally closely around the CPC Central Committee with Comrade Xi Jinping at the core and work tirelessly toward embarking on a new journey to fully build a modern socialist country and realize the Chinese Dream of national rejuvenation. Enditem