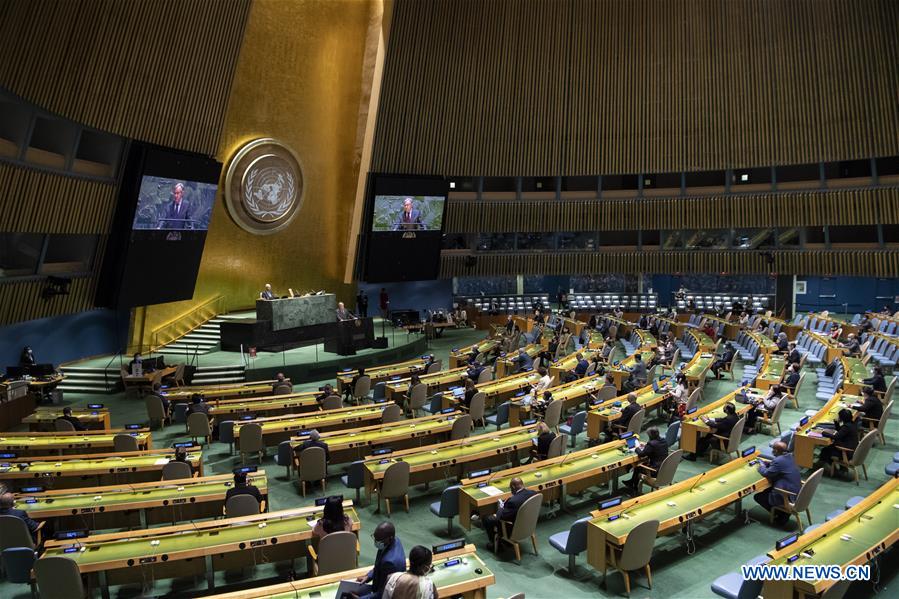 "COVID-19 demonstrates that we urgently need a strong push to meet the unfulfilled promise of Beijing (the Fourth World Conference on Women in Beijing in 1995). This is fundamentally a question of power, so it starts with the equal representation of women in leadership positions, in governments, boardrooms, in climate negotiations and at the peace table -- everywhere decisions are taken that affect people's lives," the UN chief told a high-level meeting on the 25th Anniversary of the Fourth World Conference on Women.

"Achieving this will require targeted measures including affirmative action and quotas. This is a human rights issue and a social and economic imperative," said the UN chief.

The Fourth World Conference on Women: Action for Equality, Development and Peace was convened by the UN during Sept. 4-15, 1995 in Beijing, where governments from around the world agreed on a comprehensive plan to achieve global legal gender equality, known as the Beijing Platform for Action.

"The Beijing Conference was a watershed; a landmark; a turning point. For many of us, it was a moment for deep reflection. The bold vision and transformative agenda of the Beijing conference made clear: first, that women's rights are central to equality and justice everywhere; and second, that they are denied, obstructed and ignored -- everywhere," said the UN chief.

"Since then, we have made some important gains. Maternal mortality is down by nearly 40 percent since 1995. More girls are in school than ever before in history," said the secretary-general.

Speaking about what can be improved, the UN chief said that "we have not fulfilled the ambitious vision of the Beijing Declaration."

"One woman in three still experiences some form of violence in her lifetime. Every year, 12 million girls marry before the age of 18. In some parts of the world, levels of femicide -- the killing of women -- could be likened to a war zone. In 2017, an average of 137 women around the world were killed by a member of their own family every day," he said.

"Women are still frequently excluded from peace negotiations, climate talks, and decision-making roles of all kinds. Worldwide, women have just 75 percent of the legal rights of men," said the UN chief.

Citing a study by the World Bank, Guterres said that "it could take 150 years to achieve gender parity in lifetime earned income. And that closing that gap would generate 172 trillion U.S. dollars in human capital wealth."

Talking about the impact of the COVID-19 pandemic on women, the UN chief said that "women and girls are bearing the brunt of the massive social and economic impact of the pandemic."

Referring to gender equality in the UN system, the secretary-general said that the UN has "achieved gender parity in our leadership at the beginning of 2020, with 90 women and 90 men as full-time senior leaders."

"We are now working for parity at all levels, not only for the sake of our women staff, but because women's leadership and participation make institutions more effective -- as we have seen in the response to the pandemic," Guterres said.

"I repeat my call for urgent, comprehensive action on gender-based violence. The United Nations is working to eliminate all forms of violence against women and girls, including through our partnership with the European Union, the Spotlight Initiative," said the secretary-general.

Guterres said that "we need transformative, women-led changes to the failed structures and frameworks exploited by this pandemic."

"That is the only way we will implement the 2030 Agenda for Sustainable Development and achieve lives of dignity and opportunity for all," he said.